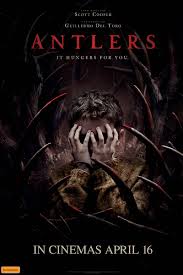 Collider’s editor-in-chief Steven Weintraub moderates a panel of director Scott Cooper (“Crazy Heart,” “Hostiles”) and producer Guillermo del Toro (“The Shape of Water”)  who talk about their upcoming Searchlight Pictures movie “Antlers“ and how they designed the Wendigo-inspired creature.

What is a Wendigo? According to the clip shown for this panel it is “a diabolical wickedness that devours mankind.”

In the clip del Toro explained, there’s “a powerful connection between what we do to nature; what we do to each other is a metaphor made flesh.”  The movie was originally scheduled to come out until in April of this year, but has been postponed until February 19, 2021.

Cooper said “Antlers” is “really about what it means to be an individual in America today and all the crises that we’re facing: the climate crisis, drug-addicted populace, our treatment Native Americans and abject poverty” but this is presented “hopefully without feeling like a message film” since Cooper is “not a fan of message movies.”

The Oscar-winning director, del Toro added,  “I think that horror is contextual always and the texture of the movie.” There’s a reason, del Toro is producing: “I produce to learn from the filmmakers.”

For Cooper, “This is my first immersion into the supernatural” and “Antlers” pushes him into unfamiliar territory, but “risk is one of the great pleasures of making art, making films.” He recalled his brother taking him to see “Halloween” and walking out
“utterly terrified about what film can do to you.”

At the center of the movie, is a young boy dealing with painful familial issues.  Del Toro described “Antlers” as “every character is enacting suffering from family rage of some kind” and they are “a bunch of broken characters attempting to get together.” The question then becomes: If you loved something, would you kill it?

That theme, has already come up in Del Toro’s movies. He asked it in the 1993 Mexican horror film, “Cronos.” Fans will recognize that as the central question in the 2006 “Pan’s Labyrinth.”

The Wendigo or Windigo has already appeared in popular culture, but Cooper wanted to get it right. He turned to Chris Eyre, a member of the Cheyenne and Arapaho tribes and director of the 1998 “Smoke Signals” with whom Cooper had consulted with (among others) for his 2017 “Hostiles.”  Despite mixed reviews, “Hostiles” was applauded by the National Congress of American Indians for its accurate portrayal of Native peoples and their languages.

As mentioned above, Dillon, a professor in Indigenous Nations Studies Program at Portland State University in Portland, Oregon, was also consulted about the Windego. Cooper noted that to some, “It’s not folklore for them; they truly truly believe in it” and this informed how the creature was designed.

Del Toro said (24:33), there were “presets” such as “the antlers are a must,” but “we have to remember we’re not creating a monster; we’re creating a god.” So there must be some “surreal aspects” and it must look “ancient, powerful and one with nature.” Working with Guy Davis, a creature designer, concept artist and illustrator and Legacy Effects, Cooper and del Toro came up with the creature after some refinements. Cooper said it was a learning experience because “Guillermo thought at a much different level” than himself. This is a creature that comes from the center of the earth. Fans of del Toro will be familiar with Davis’ work, if not his name. He previously worked with del Toro on “The Strain,” the 2013 “Pacific Rim,” the 2015 “Crimson Peak” and the 2017 “The Shape of Water.” The creature the audience will see is a detailed puppet enhance digitally under the supervision of Shane Mahan at Legacy Effects who uses “costume animatronic hybrid techniques.”

While he might have had help with the creation of the creature, when Cooper wrote the screenplay with Nick Antosca (based on Antosca’s short story, “The Quiet Boy”) and C. Henry Chaisson, Cooper already had specific people in mind: Keri Russell for the mother, Julia Meadows and Jesse Plemons for her brother, Paul Meadows. Plemons had worked with Cooper on “Hostiles” and “Black Mass.” For Cooper, Russell  “is such a relatable actor” and in many ways already has a social contract with the audience after her TV series. Another actor who Cooper had worked with on “Hostiles,” Rory Cochrane also appears.

Working with young actors like Jeremy T. Thomas and Sawyer Jones in a horror film might seem like something bordering on abuse, sure to instill some type of trauma, but del Toro stated that the “20-second scene that is terrifying” on the screen probably “took all day to shoot” and the child actors see the threatening entity as an actor who has to eat lunch and do regular things. “As long as you treat the actors with respect, care” and provide an environment that feels safe, things will work out fine, without any psychological damage. You have to “make sure that they trust you” and the actors can then “become great partners.”

With the COVID-19 restrictions, that partnership between the production team and actors may have to change. Contracts may require that actors “be monogamous with our movie” for a few months del Toro stated.  Movies will still be made because as del Toro and Cooper discussed in the panel, making a movie is very complicated. Del Toro summed up movie making as the “art of extracting beauty from adversity.”

Weintraub warmed up the panelists with questions unrelated to the movie, “Antlers.”

Q: What TV series would you like to guest write or direct?

Q: What movie do you guys think you’ve seen the most?

Cooper: Never been to Disneyland

Del Toro invited Cooper to go and has gone alone many times.

Q: Who are the filmmakers who influenced you the most?

The discussion pegged “Marnie” as a Buñuel movie and the 1953 Él (known in the US as “This Strange Passion”) as a Hitchcock movie.

Q: If you could make a project right now, what project would you make?

Cooper: “My wife thinks I’m commitment-phobic because making films is so terribly difficult and so terribly personal and takes so much out of you.”

Cooper has wanted to make a movie about a series of murders at West Point in the year 1830. They surround this young poetic, passionate cadet who is an outsider: Edgar Allan Poe.

Del Toro: “At the Mountains of Madness” or “Frankenstein” as a 2-3 part story.

Both believe the physical media (Blu-ray or DVDs) are important for the extras, especially the director’s audio commentary.

Roger Deakins is a British cinematographer known for his work with the Coen brothers and Sam Mendes. Deakins has been nominated 15 times and won two Best Cinematography Oscars for “Blade Runner 2049” and “1917.”

Del Toro mostly makes “single camera films” (but there are also situations when multiple cameras are a must, even for a single take (“Crimson Peak,” “The Shape of Water” and “Pacific Rim”).  “Bladerunner II” had a sequence where Del Toro used 13 cameras.