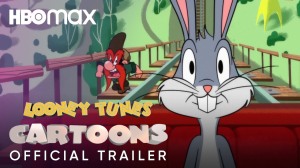 This star’s hair may be grey and white, but it’s always been that way and he’s as spry as he was in 1940, when he made his first appearance under the name he is now known under: Bugs Bunny. At 80, Bugs Bunny is getting a 55-cent forever stamp issued this week (27 July 2020) and a special anniversary limited edition collection released later this year.

The long-eared rabbit first appeared as Happy Rabbit (30 April 1938) in “Porky’s Hare Hunt.” You’ll see Porky Pig and a bit of the attitude from his prey, but not the familiar bi-color bunny.

The grey and white Bugs Bunny we know appears in the 27 July 1940 “A Wild Hare,” an Oscar-nominated film directed by Tex Avery as the prey of Elmer Fudd.

Leonard Maltin credits Tex Avery as pushing the cartoons toward “wackier gags”  when originally they were meant to be cute.

Billy West noted, “These cartoons were considered throwaways” by the industry at large and yet ironically, “they became famous and more well known than any of the movies they opened up for.”

West also explained that one of the reason for so many tunes in Looney Tunes (and Merry Melodies), is that when sound came to the movies, Warner Bros. purchased three music publishing companies. The points of the cartoons was to “popularize songs that the studio owned.”

Yet the cartoons also helped educate viewers. At 35:32, while introducing a clip from the 1957 “What’s Opera, Doc,” Brown thanked Warner Bros. for including classical music in their cartoons because her first exposure to that genre was through Looney Tunes.

If you were afraid that Warner Bros. was going to ruin a good thing and spoil your childhood memories, the team has made an effort to preserve that 1940-ish vibe, even when including new things. Kirwan described how Spurgeon had interior design magazines from the 1940s to look at the patterns, colors and designs of that era.

There have been some changes that might seem odd. You’ve probably seen photos and footage of guns at public protests in open-carry counties and states, but HBO Max has taken away Elmer Fudd’s gun. The executive producer, Peter Browngardt told the New York Times, that while they aren’t doing guns, they will still have “cartoony violence–TNT, the Acme stuff.”

The Looney Tunes production process is very collaborative according to Bob Bergen. The voice cast gets sent the storyboards and the scripts. The cast will show up and under voice director Jack Fletcher, “we’ll do a run on a scene and they’ll come up with ideas and adjustments and they’re very collaborative. They allow us to try something a little different.” He explained, “It really is a team effort.”

Jeff Bergen said the storyboards are “like a comic book” and “it’s so cool.” That’s not the norm from his experience in series work, so receiving them makes him feel “more connected to it as opposed to just looking at a script.”

One thing made possible by the COVID-19 pandemic is that at 33:56, you get to see precious pieces of memorabilia that the panelists own.

At 20:03, the panel video includes a full Porky and Daffy cartoon, “Postalgeist.”

Looney Tunes Cartoons is produced by Warner Bros. Animation and is now streaming on HBO Max.