Ms. Geek Speaks: Teachers and Race by the Numbers 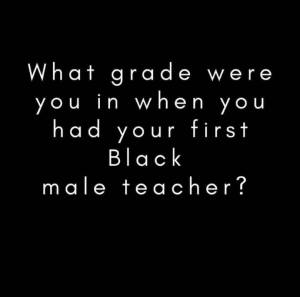 My friend posted this meme. It supposedly asks you to reflect on your life and potential racism, but what does it really mean?

The original person who posed this question graduated from Trenton State College in 1962 and went on to the University of Idaho in 1969.  She had never had a black male teacher, even during the 1980s when she took computer classes at SUNY Cortland. I don’t know what her major was and certain fields are skewed male or female, so I looked at this based on population of the cities.

Trenton State College is currently called The College of New Jersey and is in the city of Ewing. From the 2010 Census, the racial demographics of Ewing are 63 percent white, 27.6 percent African American.

Cortland, NY in 2010 was 96 percent white and the largest minority group was Latino with 1.7 percent of the population and 1.56 percent black.

It would not be surprising that she would not have a teacher who was black in Moscow, Idaho or Cortland, NY, predominately white cities, at least in 2010. So this is not necessarily a sign of “systemic racism.”

So let’s look at some other numbers. For the school year of 2017-2018, 76 percent of the public school teachers were women. Of the 24 percent who were male, only 11 percent were teaching at the elementary school level with 36 percent at the middle school level. So the odds of having a male teacher in elementary school today are low.

In public schools, where the teachers end to be drawn from the community, it’s probably better to look at the community before deciding there is a problem. I grew up in San Diego, California.  That county is 75 percent white. African American are only 5.5 percent white Asians are 12 percent. Latinos are 34 percent.

Within the city where I attended public schools, currently the racial make up is 53 percent white, 58 percent Latino, 14 percent Asian and 5 percent black. So if the teaching staff was representative of the community, it would be understandable if one didn’t have a black teacher of either gender and not having one would not necessarily represent systemic racism. I did have a Latino teacher and an Asian teacher.

So the greater problem would be if there was a lack of Latino teachers, male or female in San Diego County rather than Black teachers. Statewide, blacks are only 6.5 percent of the population and Asians are 15.5 percent. Latinos are 39 percent.

My husband, who grew up in Hawaii, did not have a black teacher in public schools. The current statistics for Oahu are 25 percent white, 2 percent black, 37 percent Asian and 10 percent Latino. Statistically, if one considers both the population and the gender skewing of public schools, it is not surprising that he did not have a black teacher of either sex. Yet that doesn’t indicated systemic racism.

The question at the top would have a different meaning for someone in Atlanta, Georgia where the black population is 52 percent and the white population is 40 percent. Asians are only 4 percent.

There certainly is systemic racism, but we need to: