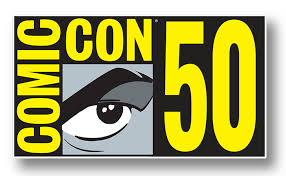 “The Gathering” was the kind of evening you’d imagine Bruce Wayne would attend—a tasteful evening fundraiser for a new museum. This wasn’t Gotham, but San Diego’s eclectic Balboa Park, home to the world-famous San Diego Zoo and future home of the Comic-Con Museum scheduled to open in 2021. The popup museum was hosting an inaugural fundraiser, “The Gathering,” in what used to be San Diego Hall of Champions which closed in June 2017.

For this year’s San Diego Comic-Con, the 50th anniversary of what started out as a small event for comic-book fans, the museum inducted Batman into the Comic-Con Character Hall of Fame. There were plenty of Batmans wandering the museum’s three floors. Green-suited Riddlers delighted in meeting Jokers  dressed in purple suits. Catwomen stalked the waiters for a few tasty nips of chicken and a harried journalist named Clark Kent searched for a telephone booth out of Lois Lane’s scrutiny. A string quartet played mostly Batman-related music, but while I was there no Batman got down and did the Batusi.

The stage was dominated by six-foot tall statue of Batman. Based on Todd Farlane’s 1988 cover for “Batman” Vol. #423, the figure is all about the cape. Sorry Edna Mode. The statue was one of the items auctioned off to help raise funds for the museum and it went for $6,000.  The statue is the 100th addition to the DC Collectibles’ Batman: Black & White line. Downstairs, the more reasonably scaled examples of the Black and White line were

With so many Batmans in the crowd of 400-plus, DC Publisher and Chief Creative Officer Jim Lee had to accept on Batman’s (or Batmans’) behalf. Of the inaugural inductee of the museum’s Hall of Fame, Lee said, “Batman is real in every person who summons the strength and resilience to keep going. That is a superpower. There’s no other way to describe it.”

The crowd previewed “The Batman Experience Powered by AT&T,” the largest ever collection of Batman-related posters, drawings, movie props, costumes and vehicles. While this generation may know Batman from movies, DC Publisher Dan DiDio reminded the crowd that the caped crusader started as a published story. “Comic books are the test lab for Batman. It’s where we take chances, where we experiment with new ideas, new concepts and storylines.” He added, “Those experiments in turn inspire other artists, filmmakers, and writers. I love to see stories we’ve worked on become the basis for other media like video games, movies, and TV shows.”

On the first level, besides the Bat-signal, were the Van Kilmer Batmobile from the 1995 “Batman Forever” and the somewhat phallic  Batmobile from Tim Burton’s 1989 “Batman” and “Batman Returns.” The Batman suits were also on display display alongside the villains he faced such as Scarecrow, the Joker, Mr. Freeze and Poison Ivy also made an appearance. The militant missile penguins, Michelle Pfeiffer’s whip and boots from her Catwoman days and some Bat weaponry were also ready to be admired.

“The Batman Experience Powered by AT&T isn’t just to be viewed. Downstairs a Batcave Gaming Lounge brought generations of Batman video and arcade games to San Diego, straight from the DC archives. New video games were demoed. You could even get into the Adam West era Batman mindset by hitting the punching bag with a famous villain’s face project on it. Projection mapping and lights to trigger classic animations and sounds on screens. Pow! Wham!

The museum isn’t all about the Caped Crusader. “Cover Story: The Art of Comic-Con 50” celebrates the geek culture event of the year and includes the original Jim Lee artwork for the 50th anniversary cover. “Geek Couture: Designs from the Her Universe Fashion Show,” brings the winners of last year’s  Her Universe Fashion Show back to Comic-Con: Judges winner, “The Couture of Water” (inspired by “The Shape of Water”) by Cynthia Kirkland; Singer Winner, “Howl-in for You” (“Howl’s Moving Castle” By Jane Burson and Audience winner, “PWL Chic: Ripley in the Powerloader” (“Aliens”) by Kristi Siedow-Thompson

If you can’t make it out to San Diego for this free exhibit, part of it may come to you. The first ever traveling exhibit from Monday Gallery in Austin Texas will give you a taste. “Mondo Gallery: 80 Year of Batman” features 19 iconic comic book covers reproduced as screen-printed posters.