SDCC2020 @Home: The Mandalorian and His Many Gadgets

Before we knew that “Hamilton” was going to Disney +, one of the main reasons for subscribing was “The Mandalorian.” Created by Jon Favreau, the first season of the Star Wars series had eight episodes and introduced baby Yoda, who is known as the Child.

For this panel, “The Mandolorian and His Many Gadgets,” the Brain Trust of Daniel J. Glenn (podcast producer), Dr. Michael Dennin (science expert: ancient aliens, Star Wars tech), and Ben Siepser (bio-engineer) of the podcast “Fascinating Gadgets, Gizmos, and Gear-Based Technologies” talked about the possible science behind the Mandalorian tools.

For those unfamiliar with the show, the Mandalorian (Pedro Pascal) is a bounty hunter, Din Djarin, with dubious ethics roaming alone in what is essentially a galactic western. Sometimes called “Mando,” which is a generic term for all members of the clan of skilled warriors known as the Mandalorians, he is asked by “The Client” (Werner Herzog) to track and find a valuable asset: the 50-year-old Yoda. Having delivered the asset to his client, the Mandalorian decides to rescue the Child and, as a result, a bounty is placed on his head. The events take place after the fall of the Empire, but before the rise of the First Order. The Mandalorian’s world is far from the authority of the New Republic at the outer reaches of the galaxy.

Glenn took the gadgets on at first in a logical progression. A bounty hunter needs to track, shoot the competitors and then capture the desired entity.

The Mandalorian is a member of the Bounty Hunters’ Guild which gives members tracking fobs that they return after they’ve captured their quarry.

Glenn posed the problem of a galactic tracking system and immediately rejected the notion of entities having RFID chips because you’d need a galactic positioning system (a different type of GPS) and the Mandalorian is never shown taking a chip out to prevent being tracked once he has captured his bounty. Dennin noted you need 1) something to lock in on as a signal and 2) you are tracking something biological.

Siepser’s solution was that everyone’s biological data is unique and “would probably react to being stimulated by electromagnetic waves,” an idea that he got from Star Trek. In the Star Wars galaxy there must then be  “sensors everywhere and they’re constantly pinging”  and because we know the Star Wars universe has a sophisticated communication system, Dennin added that the bounty hunters could “piggyback on that system.” 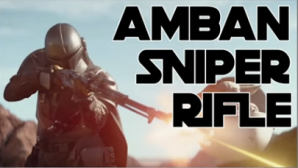 This rifle disintegrates so it isn’t for your bounty target unless you can bring back a cloak and claim your reward. In this case, the blast kills without destroying the clothing. 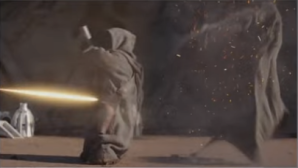 Glenn noted that in a Looney Tunes cartoon (“Duck Dodgers in the 24 1/2th Century”), Marvin the Martian had a similar firearm and disintegrated Daffy Duck but the technology in that cartoon allowed another device to re-integrate later,  so that might be a possibility.

The problem is “the physics of total annihilation of the corporeal body.” Dennin noted that in order for the body to vaporize each atom must become unbound and the radiation must push them far enough apart that they cannot rebind. Each atom, however, would have a slightly different frequency and this would be both a physics and engineering challenge.

Siepser thought that wave resonance might be the answer, but the weapon’s discharge looks like a bolt rather than a cone of electromagnetic energy. For that reason, he thought it would make more sense if the weapon was discharging some type of plasma. This plasma would have to spread out evenly or otherwise it would “drill a hole through” the target.

Dennin suggested it had something to do with using a surface resonance and yet that would have to be able to include all kinds of skin types and that would be the reason the cloak remains.

Let’s be honest. This weapon doesn’t make any sense.

First mentioned in “Star Wars: Return of the Jedi” and then in “Star Wars: The Empire Strikes Back,” it made for a memorable scene as Han Solo expresses his love for Princess Leia.  At StarWars.com and the Wookieepedia, it is listed as carbon-freezing and not carbonite freezing.  When this is used on Han Solo, it seems a bit experimental, but by the time of the Mandolarian, it’s become more commonplace.

If you’ve worked with plants, you’ll know that normal freezing causes the water in cells to expand and break down the cell walls.

Glenn thought it wasn’t really “freezing,” but placing the bounty in a protected hard carbon unit to prevent the captive from harm. He thinks it is more like an induced “suspended animation.”

Dennin thought it was a clever restraining technique that would be hard to escape unlike handcuffs or straight jackets.

Siepser suggested liquid nitrogen which is how they maintain cell cultures. With liquid nitrogen, you’d flash freeze down to 70 Kelvin and then you might be able to thaw them out without any damage. Obviously, do not try this at home.

Glenn noted that experiments with non-hibernating animals such as rats were able to successfully put rats into hibernation and bring them back out. Triggering hibernation or torpor and putting an animal into stasis might be a way to travel in space. According to him, NASA has some interest in this.

The Mandalorian gets paid in Beskar armor.  The armor has, according to Glenn, some kind of electromagnetic property because it repels blaster bolts.

Dennin believes the blaster bolts reflect off the suit rather than going through, but Siepser noted that there’s electronics underneath so suggested there’s some kind of energy projection. It is a strong metal that can be magnetized and “uses an antenna to amplify any repelling qualities inherently.” 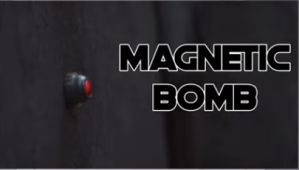 Since we’re in the poorer areas of the galaxy and a lot of the walls seem porous, looking to be made out of stone, the use of actual magnets to keep the bomb in place seems doubtful.

So the Brain Trust looks into different possible explanations as to what makes this little gadget stick to anything anywhere without getting glued the Mandalorian’s hands or body at the wrong time.

Dennin went to the Marvel-verse for the solution, mentioning Spider-man and the possibility of micro hair-like mechanisms that end up on frog pads. Are your spider senses tingling?

Then the Brain Trust considered if that small of a device could actually pack that big of an explosion and remembered that most explosive chemicals require stabilizing agents.

In the Wookieepedia, these are called “whistling birds” and according to that source, they are made of Beskar steel. The Mandalorian has a rocket gauntlet loaded with these.

According to Glenn, the crazy part of this technology is miniaturizing it to make a homing missile launched from your wrist.

Siepser thought the whistling birds were too small to actually kill the targets so that there must be some kind of “mass acting poison” in them. 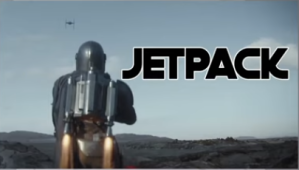 The jetpack was a no-brainer for this Brain Trust because, according to Glenn, in February of this year, a company essentially made just that. See Jet Man Dubai.

If you watched Quentin Tarantino’s flick, “Once Upon a Time…in Hollywood,” you’ll remember these have been used in wars for quite a while. The real Star Wars aspect of this question is: How can we make this wrist-sized?

Then this all becomes too real for anyone familiar with the Vietnam War because Glenn noted that to make this more than something like a flame on the end of a branch, it has to have something that makes it scary like napalm.

Dennin sees this as an engineering problem because something sticky must land on your target for it will actually burn.

Siepser noted that something like napalm which is essentially jellied gasoline requires volume and the Mandalorian would need some kind of hidden tank to store it. There is a character who does have a nasty flame thrower and a tank so perhaps the Mandolorian’s flame thrower is just a deterrent.

I wondered if the actual material worn by the denizens of this world is high flammable and that might be another cause for concern. If you’re working with fire in an art lab, you’re asked not to wear things like lycra Spandex and nylon. Nylon stockings have a horrific effect of melting and sticking to your skin. Slate has an article about an angry divorcé and his melting Santa Claus costume (“Stuck on Santa“). In 2006, the problem of melting synthetics was noted by the Marines in Iraq.

Favorite Gadgets of the Brain Trust: