Harry Potter had a lot of heartache. He was orphaned. He lived under the stairwell. He was in love with the grievously named Cho Chang, but just like the sorting hat got things all sorted out–right person to the right house, Harry Potter found his true love.

The Truffle Cottage has a 3″ x 1.75″ Breakable Harry Potter chocolate heart mean to break ($14.95). You have a choice of any of the four houses (Slytherin, Griffindor, Hufflepuff or Ravenclaw. You can even get a sorting hat ($10 in either dark or milk chocolate). 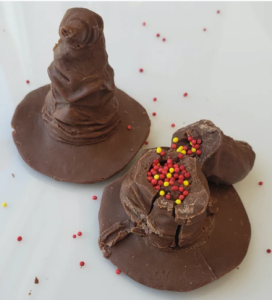 The golden snitch box comes in dark or milk chocolate and in either of the four houses and contains the following:

Each box comes with a wax seal in your chosen house’s color!