Jackie Chan in a Wildly Out of Touch ‘Vanguard’ ☆ 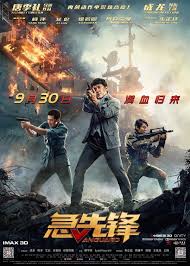 Your mission, should you choose to accept it, is to view a Communist-vehicle starring Jackie Chan to see if it is really as bad as everyone says it is and if there are any redeeming martial arts sequences because no one really goes to a Jackie Chan film for the plot (or the good acting). As always, should you or your force of friends be caught in a Communist mind-set or have their affection for Jackie Chan and his films killed, I will disavow any knowledge of your actions. This review will not self-destruct, but the careers of those involved with this movie might.

Produced by China Film International Media Co., Ltd., the largest state-owned film company in the People’s Republic of China, the film is deeply steeped in old-time Chinese communist rhetoric. This movie might play well to people with a similar mindset, but such people are probably not driving the movie market, particularly not in 2020. Directed by the Hong Kong-born Stanley Tong (“Rumble in the Bronx”), the film suffers from so many issues: choppy action sequences, bad dialogue and misjudged attempts to tick off all the politically correct boxes. Tong can hardly complain about the writing because he is also credited as the screenwriter.

“Vanguard” is Chan’s seventh outing with Tong. Tong is 60; Chan is 66. Do I believe Chan as an action star? Sure, why not. When was the 68-year-old Liam Neesom’s last outing as an action hero? Can it be any worse than the 78-year-old Harrison Ford?

Tong has wisely relegated Chan to a leadership role. The pre-title scenes are so Chan-less you might wonder if Chan is only making a cameo. Instead, we have two younger stars, the 29-year-old Yang Yang (楊洋,) in the heart-throb role of Lei Zhenyu and the 37-year-old Ai Lun (艾伦)in the steady responsible fatherly role of Ai Lun.

Ai Lun is hosting a family celebration at the Golden Phoenix restaurant for the Chinese New Year in London, not far from the city-wide celebration in Trafalgar Square. While he’s a married man, Lei Zhenyu is not, which some auntie informs a bevy of single young women also attending the celebration. Lei Zhenyu is the godfather to Ai Lun’s son, who is gifted a Captain China (bigger than Captain America).

Elsewhere or on the other side of the dancing red dragon, an important businessman, Qin Guoli (Jackson Lou), is with his trophy second-wife. Qin finishes a short cellphone conversation with his twenty-something daughter, Fareeda (Ruohan Xu) who is somewhere in Africa (Where in Africa, isn’t really made clear, but she’s with giraffes.), when he and his wife are attacked, their bodyguards are killed the the Qin are kidnapped. They are taken to a restaurant where Broto (Brahim Chab) threatens to kills Qin’s wife (love her plum-colored coat).

Qin had a business partner, the unseen Massym, who Qin belatedly learned was a member of the Brotherhood of Vengeance and wanted him to obtain weapons of mass destruction but someone tipped off the secret service in London. Massym was betrayed and killed, but his eldest son, Omar (Eyad Hourani), survived and is out for revenge and the fortune that his father left behind.

With one gun between them, the two have a restaurant brawl and that red dragon comes into the mix for a cinematic don’t-try-this-at-home-kids moment. Ultimately, the Vanguard team, including Chan’s Tang Huanting, are off to Africa to protect Fareeda, she of the long and much highlighted ombre tresses. When the team finds her, she’s communing with a CGI lion named Charlie. No idea what the name of the lioness is. Her photographer is properly protected in a steel cage.

Fareeda is an activist, however, most activists outside of some sketchy Tiger King like people, don’t lounge around with wild animals or take photo ops with them. Lions aren’t so easily tamed especially by some globe-trotting social media celebrities. Usually, like Christian, friendly lions are animals raised by the human when they are young. And, as Melanie Griffith learned as a young teen during the filming of the disastrous “Roar” or Siegfried & Roy learned during their show even then big cats don’t play by the same rules as humans.

The script mentions elephants, too, and you can’t help but think that someone was concerned about the Chinese image on the ivory consumption front. The film could have turned into a crusade against the harvesting of parts of endangered animals, such as rhinos, but this film isn’t really concerned with animal activism.

Omar has hired the Arctic Wolves to kidnap Fareeda. The poachers happen to be friends with the Arctic Wolves. The poachers also are angry with Fareeda because of her animal lover activist posts on Instagram or something like Instagram. Who knew that poachers were so sensitive about their public image? Agreeing to help kidnap Fareeda, the poachers board their jeeps and waste a few rounds shooting into the air, causing a flock of black birds roosting in the trees to fly away.  Not believing in stealth,  this gang of poachers-turned-kidnappers shoot of a few more rounds into the air before they reach Fareeda and her lion friend.

During the confrontation between Vanguard and the bad guys, Jackie Chan does do a cool car move, and, as in the restaurant scene before and as you’d expect from a Jackie Chan movie, there are some moments of martial arts humor. Lei Zhenyu and Zhang Kaixuan get some back up from a badass female Vanguardian, Miya (Mu Qimiya 母其弥雅) who proves to be a stunt driver.

Somehow, or, in order to introduce a romantic interlude, Fareeda and Lei Zhenyu get separated from the rest of the Vanguard crew. Fareeda accidentally shoots her Vanguardian with a tranquilizer dart and so she takes him to her secret hideout, high in the trees, in a jungle oddly devoid of monkeys. After spending the night there and doing a bit of bird-watching, the couple are again running from the bad guys, this time the baddies have brought some bad guys straight from “The Lion King,” a pair of CGI hyenas.

Eventually, we will get out of Africa. There will be more gadgets including drones and a hoverboard and a chance for Captain China to come to the rescue. What there won’t be is good dialogue or a reason for all of this globe-hopping.

“Vanguard” is not a good action film. Mostly in this pandemic world, I was paying more attention to the hairstyles of the men, thinking how it might look on my husband. I was bored. My husband, who has forced me to see bad Asian films with good martial arts sequences, was bored. “Vanguard” was originally set to be released on 25 January 2020, but due to the COVID-19 pandemic, the release was postponed. The film was released in China, 30 September 2020. Gravitas Ventures released the film in the US today, 20 November 2020.

In a perfect world, this film would self-destruct in 10 seconds. Good luck to everyone who was in this film because it didn’t do well in China nor is it likely to do well in the US. In Mandarin and English with English subtitles. This review is based on the Mandarin Chinese version, but there is also an English dubbed version.