You Know the Type: On Daniel Dae Kim, Grace Park and ‘Hawaii 5-0’

August 07, 2017 for RogerEbert.com
Recently I was reminded of that American sitcom, “Three’s Company” that ran from 1976 to 1984. If you’re unfamiliar with the show, it was about a man Jack Tripper (John Ritter) who had two female roommates: Janet Wood (Joyce DeWitt) and originally Chrissy Snow (Suzanne Somers). Due to reasons of morality, Jack pretended to be gay so that the conservative landlord would accept two single heterosexual women living with a single man.During the run of the show, the ditzy blonde secretary played by Suzanne Somers Seasons 1-5 was replaced by the blonde secretary Cindy Snow (Jenilee Harrison). Harrison was later replaced by the blonde Priscilla Barnes as a registered nurse, Terri Alden. One blonde with cleavage replaced another blonde with cleavage.

It was the recent announcements from the reboot of the TV series “Hawaii 5-0” that made me think of the trade off of a type to fill a slot. In the case of “Hawaii 5-0” it was the East Asian actors who left due to a pay dispute and were quickly replaced.

When the show began in 2010, the lead actor Alex O’Loughlin who plays the white Steve McGarrett had previously been in a few films, but nothing big. He is from Australia and of Irish Scottish descent. He was in the TV series “Moonlight” from 2007 to 2008 and then in “Three Rivers” from 2009 to 2010.

Korean-American Daniel Dae Kim has been in the critically acclaimed 2004 “Crash.” He was in popular TV shows, “Angel” as Gavin Park from 2001 to 2003 and “24” from 2003 to 2004 and “Lost” from 2004 to 2010. At five-foot-nine and with a jaw so square you could use to it to set right angles when building a house frame, he should be able to build a career as a leading man. He has a proven record, but not leading roles. He’s shorter than O’Loughlin and taller than Caan. At 48, he must be wondering when will he get his chance to be a lead and be paid in a comparable manner.

Grace Park is tall and lovely to look at. She’s done her time on shows like “Battlestar Galactica” before she got to “Hawaii 5-0.” She brings the sex appeal to “5-0” in a way that seemed to me a step back for women and for Asian American women. The bikini surfing introduction seems a slap in the face of from award-winning “Cagney & Lacey” (1982-1988), the ladies on a variety of “Law & Order” series (e.g. Mariska Hargitay) and the lead detective Kate Beckett (Stana Katic) ABC dramedy “Castle” (2009-2016). Her replacement, Meaghan Rath, will be a recruited from her work as a hotel lifeguard. See a pattern? Do you think the showrunners said something like: We need an Asian-ish actress who looks good in a bikini.

As second banana, the son of James Caan, Scott Caan was cast as Daniel Williams. He is part Jewish. He played Turk Malloy in the 2004 “Ocean’s Twelve” and again in the 2007 “Ocean’s Thirteen.” He was Scott Lavin in “Entourage.”

According to Variety, Rath’s character, Tani Rey, will be a police academy fail, kicked out although being a “first-rate candidate.” Beulah Koale joins the cast as former Navy SEAL Junior Reigns, while Ian Anthony Dale who has recurred as Adam Noshimuri, has been promoted to regular.

Rath was born in French Canada (Montreal) and her mother is Goan Indian while her father is British and Austrian Jewish descent. Koale is a New Zealand-born actor of Samoan descent. Rath may be North American, but neither Rath nor Koala are US American. Minnesota-born Dale is French and English on his father’s side and Japanese on his mother’s.

The actual demographic breakdown of Hawaii is 23 percent non-Latino whites. Asians are 37 percent. People of two or more races makes up 24 percent. Native Hawaiians and other Pacific Islander are 10 percent. A better representation of the Hawaiian demographics would be one white, two Asians, one mixed race person.

Yet the gubernatorial succession on this “Hawaii 5-0” seems to follow the old progression of white first, black second and Asian American woman more acceptable than Asian American male.

In 2010, when this version of “Hawaii 5-0” debuted, would it be so inconceivable that a special task force in Hawaii would be led by an Asian American? I winced when in the reboot’s pilot, McGarrett had to be shown as physically superior to the Asian American man. Although Chin Ho Kelly was a well-regarded quarterback in high school, of course, McGarrett was better.

Steve McGarrett: “I know you.”

Kelly: “That’s very kind of you to say, considering it was you who broke all my records.”

Of course, Hawaii’s race demographics are markedly different from the mainland, including California. In California, Asian Americans only make up 15 percent (blacks are 6.5 percent). 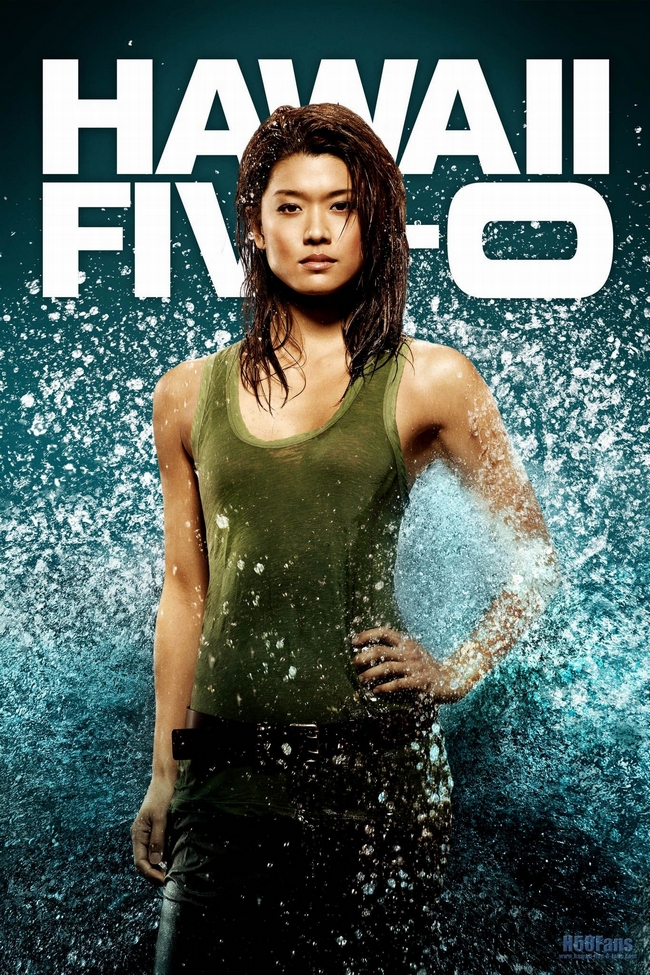 To make full disclosure, I used to watch the original “Hawaii 5-0” and that was before I ever visited Hawaii where some of my relatives live. That was a long time ago. I did not, until this month watch the pilot or a single episode of the reboot because given my experiences in Hawaii and my knowledge of the demographics, the premise of two white men leading the team in 2010, seems out of step with today’s world, but that was before the election of Donald Trump, the Muslim ban and the KKK coming out in support of the current president.

Further, I’m not a surfer, but I’ve surfed a bit and as a kid we used to go to the beach often. I wore bikinis, but also a t-shirt before there were rash guards and I bought rash guards from New Zealand before they became more popular here. I’ve heard of surf turf wars, most notably near where I live and it’s not usually a surfer girl punching out some non-local for lack of surfing manners. Would you really want a hothead on your team that physically assaults people, especially tourists in a town or small island that depends upon tourism?

The reboot of “Hawaii 5-0” began with Jean Smart as the Governor Pat Jameson. From looking at Wikipedia, I learn that the blonde Jameson is assassinated at the end of season one. Richard T. Jones plays the next governor, Sam Denning. Jones is black. He is succeeded by Rosalind Chao as Governor Keiko Mahoe for Season 7. In reality, Hawaii has had a female governor, Linga Lingle (2002-2010), but she wasn’t blonde like Smart. Hawaii has never had a black governor but that’s not surprising, considering that under two percent of the population is black. It has yet to have an Asian American female governor but as the USA’s newest state (1959), Hawaii has only had eight governors. The first Asian American female governor in the US was Nikki Haley, a Sikh American who served as the 116th governor of South Carolina (2011-2017).

My Hawaii-born husband was concerned after the hit series “Lost” ended its run. TV shows filmed in Hawaii are an economic asset to the islands. “Lost” wasn’t set in Hawaii, but “Magnum P.I.” (1980-1988) and original “Hawaii 5-0” (1968-1980) were. He watched only the pilot of the “Hawaii 5-0” reboot, but was too insulted to continue. We were as a couple effectively boycotting the series already.

On this new development, we agree that the new cast members constitute the old imperialism technique of divide and conquer. I suppose that’s the best damage control the network can manage. Leading minorities might be the old “white man’s burden” but let’s talk about the new white man’s burden: sacrificing for equity.

On TV, uniting as friends for salary negotiations was most notably done by the all-white cast of “Friends.” More recently this generation’s “Friends,” “The Big Bang Theory” saw five original cast members (Jim Parsons, Johnny Galecki, Kaley Cuoco, Kunal Nayyar and Simon Helberg) take a small pay cut so that newer cast members Mayim Bialik and Melissa Rauch could get raises. Cynthia Littleton, the managing editor for Variety’s Television section who reported the pay increase, called the gesture “extraordinary.” This year, Emma Stone told Out Magazine, that some of her male co-stars on movies have taken “a pay cut so that I may have parity with them.”

The problem with “Hawaii 5-0” and its cast and crew is that they are not extraordinary, not in 2010 when the reboot premiered and especially not in 2017. Just as it took white men to change their attitudes for black men and women to gain freedom (since white women mostly could not vote) and white men to provide women the vote, pay equity requires predominately white men (and other men) in power to be willing to act selflessly. The demand for pay equity isn’t the Civil War where the question of slavery was partially answered. It isn’t standing up to racial profiling that saw some Japanese Americans interned. It isn’t standing against a communist witch hunt. No one is being asked to give up or risk his/her life. There might be blacklists somewhere, but “Friends” and “The Big Bang Theory” has shown, the lists haven’t hindered careers. Yet for women and minorities in today’s world, pay equity hinges on the willingness of people, often white people, to stand in unity and maybe even make monetary sacrifices.

The actions of O’Loughlin and Caan before and since the departure of Kim and Park will always be colored by their inaction during Park and Kim’s contract negotiations. I wish Kim and Park good luck and hope Kim finds a leading role that he deserves. I hope Park finds a part that will give her more respect. “Hawaii 5-0” began as an imperfect vehicle for representing the state of Hawaii and now provides an unfortunate display the state of race relations between Asian Americans and the white majority. While shows like “Fresh Off the Boat” have shown Asian Americans as individuals facing their own cross-cultural problems, “Hawaii 5-0” seems a step backwards, further back than the original series. Just like the three of blondes in “Three’s Company,” in this version of the crime fighting show, Asians and Asians Americans are just a type. In 2017, Asians and Asian Americans and, indeed, all minorities, need to be more than local color or types who can be easily replaced.