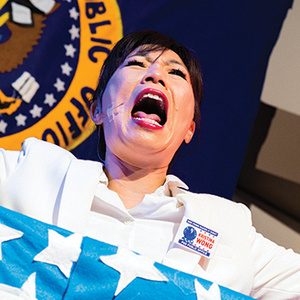 If you think of elected officials as people who smile too much and practice saying the right thing instead of speaking with sincerity, Kristina Wong, is here to show you can have a prickly personality and win an elected office.   Wong begins “Kristina Wong for Public Office” dressed in a white pants suit that you might associate with former presidential candidate Hillary Clinton, but Kristina Wong reveals a bit of white bread Elvis Presley rock star swagger.

Wong found out that being a “Korean adjacent” Chinese American, that didn’t necessarily translate into votes in Koreatown. What you do learn in this exclusive on-demand video performance is that you don’t need to be exceedingly rich or even amazingly popular to be elected to public office.

Wong does give us a view of the other side of the council meeting that a more seasoned or ambitious politician would hide. She complains about the burden but understands necessity of procedure and listening to others. Directed by Diana Wyenn, the show uses a little video and some narration to gloss over the COVID-19 obstacles. Watching the promotional video, it’s clear the original scripted experience would have been more intimate, more interactive.

“Kristina Wong for Public Office” demonstrates that representing the people and making change aren’t easy. Wong touches on how wonderful it was to be in a small theater having fun with a group of strangers. This piece serves as a reminder that COVID-19 is something we also need to work as a community to overcome. While I miss the live experience of an audience laughing together, I don’t miss the traffic or the worries about finding and paying for parking. This video performance is an opportunity for those who miss the theater scene and those who would not normally make the trek. Sit back in your comfy clothes and be entertained while contemplating politics on a small scale. What could be Wong with that? The Wong’s one-woman show is viewable Nov. 29, 2020, 11:59 PM (PT).

“Kristina Wong for Public Office” was filmed live at the Kirk Douglas Theatre in Culver City and presented by the Center Theatre Group in Partnership with The Broad Stage.

It is free to members of The Broad Stage (access code sent by email). Learn more about becoming a Member. The show is also free to CTG subscribers & supporters. All others can access the event for $10.