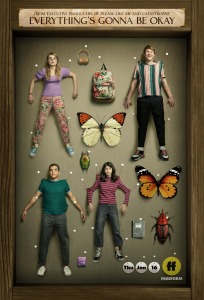 One of the charms of “Everything’s Gonna Be Okay,” is it doesn’t play coy. Sex is going to be discussed in ways that might make some heterosexual people uncomfortable and creator/executive producer Josh Thomas isn’t going to seduce you into liking his characters before he drops the gay bomb. The pilot begins with a gay kiss or rather gay kisses and a discussion about where to go but the overall feeling is one of optimistic honesty. During a TCA panel discussion, Thomas explained the strategy behind this.

Before she introduced the panel, Lauren Carrao, Executive Vice President of Original Programming and Development at Freeform, said of the show, “This show is not only funny but it’s also tender and truthful, brave and completely unexpected.”  For this unfamiliar with Thomas, he is the brain behind and star of the Australian import, “Please Like Me,” a show that the New York Times named “one of the top international shows of the decade.”

Corrao reported that the series “tackles it all–budding sexuality, autism, content, parenting and loss, and like Josh, it’s heartfelt, honest, quirky and gives us a bit of hope that when presented with life’s most difficult moments…’Everything’s Gonna Be Okay.'”

Thomas already has a large following because he was on “the highest rated show on Australian television at the time” and he’s “learned since then it that you have to speak a lot of time with them.” But “when you’re starting out, you’re just trying to survive and you’re like a little desperate” because you “want anyone to like you.” Now, with this new series, he wants to get the people that he wants.

The pilot opens with gay kissing. Thomas said his mother asked him, “Don’t you think, like, you should have put that gay kiss, like, a bit later because it might turn people off?” But Thomas replied, “Why do I want people watching this that are homophobic?” He then explained, “I put the gay kiss up as a shield so I don’t have to deal with unlikeable fans.”

Nicholas’ father deserted him in Australia and seems to be attempting to make amends, but there’s a catch. His father, Darren (Christopher May) is dying and he’s not going to seek treatment. His bucket list is accounts and budgets and possible guardians for his two girls, Genevieve (Maeve Press) and Matilda (Kayla Cromer).  Nicholas becomes their guardian and navigating his funeral is one of the first emotional moments where the family bounds grow and Matilda’s autism must be dealt with.

Cromer is on the spectrum, but she’s also an impressive person. Her audition story is a lesson is in full-on determination. Seeking privacy to practice her lines, she sent to the beach early in the morning. She relates, “While I was walking on the beach, “I heard..a drinking snap and when I looked down, I realized I stepped on a piece of glass and nicked by tibial artery n my ankle. So, I took my pocket knife that was in my beach bag and I had to cut off a piece of my shirt, to make a makeshift tourniquet, using my highlighter for my lines to twist.” She then drove herself to urgent care where she was told she had only partially nicked the artery, but she didn’t need a tourniquet, but she was “the only person that had come in that actually knows how to do it right.”

Thomas added that he was sure that someone who could do that would definitely “bring something to the role.”

Because of her autism, Cromer said, that “the hardest thing” she faces “on set is trying to understand Josh’s sarcasm.” Cromer wishes for a “sarcasm sign” at least for Season 2.

Thomas said that while “Please Like Me” was autobiographical, he “didn’t get to explore high school.” At this point in his life, he finds teenage girls to be so funny. “When I make a TV show, when I watch a TV show” he wants to see “people who I want to hang out with.” He’s drawn to Press’ character who is, according to Faison, “an angsty teenager.”

Thomas said, “I think we have four teenage girls on the show, and I feel like they were all different phases of me when I was a teenage girl.” He also wanted to do a show on autism because he knew so little about it. “What happened was I watched a documentary called ‘Autism in Love.’ And I read the title and I thought, ‘Wait. Can people with autism feel love?’ And two minutes later” Thomas thought he was an idiot for being do “dumb.” Then he spent months researching autism and “Everything’s Gonna Be Okay” is the result.

The directors allow the actors to feel welcome and safe, particularly during the tasteful sex scenes. Faison singled out Silas Howard, who has so far directed five episodes, as being particularly “awesome” in this respect. Thomas has an added layer of apprehension during the sex scenes because “I’m also their employer, and that like scares the shit out of me.” .

Faison spoke up, saying that Thomas makes things fun and cool and encourages them all to be themselves. In one instance, Faison was attempting to take off his shirt in a sexy manner, but he had to confess, “I can’t get my shirt off sexy.” Thomas told him to use the humor.

“Everything’s Gonna Be Okay” has a whimsical humor and leads us to consider the trials of high school for the perspective of those with autism as well as those who must navigate their lives around and with autistic family members.