Bruce Lee, Tarantino and ‘Once Upon a Time…in Hollywood’

Recent news about “Once Upon a Time…in Hollywood” has given me renewed appreciation for Brad Pitt, but research has led me down a different movie theater aisle for Quentin Tarantino. No spoilers, here, but as I was re-watching the 1994 “Pulp Fiction,” a movie that I enjoyed despite the violence because of the editing and story-telling (as well as a revival of John Travolta’s then-stalled career), I thought about Tarantino and his portrayals of East Asia.

In the movie, we start (“Prologue–The Diner”) in the Hawthorne coffee shop that is about to be robbed by “Pumpkin” (Tim Roth) and “Honey Bunny” (Amanda Plummer). We don’t see them at first, but when we circle back to the coffee shop (“Epilogue–The Diner”), Samuel L. Jackson’s Jules Winnfield tells Travolta’s Vincent Vega that they have  witnessed a miracle–a person who a gun point-blank and missed them:

Jules: About the miracle we just witnessed.

Vincent: The miracle you witnessed. I witnessed a freak occurrence.

Jules: What is a miracle, Vincent?

Vincent: An act of God.

Jules: And what’s an act of God?

Vincent: When, um … God makes the impossible possible … but this morning I don’t think qualifies.

Jules: Hey, Vincent, don’t you see? That shit don’t matter. You’re judging this shit the wrong way. I mean, it could be that God stopped the bullets, or He changed Coke to Pepsi, He found my f***ing car keys. You don’t judge shit like this based on merit. Now, whether or not what we experienced was an “according to Hoyle” miracle is insignificant. What is significant is that I felt the touch of God. God got involved.

Jules: You know, like Caine in Kung Fu: walk from place to place, meet people, get into adventures.

Vincent: And how long do you intend to walk the Earth?

Jules: Until God puts me where He wants me to be.

Instead of like Jesus or Moses, Jules says Caine, the character played by David Carradine. Carradine would then play Bill in Tarantino’s 2003-2004 “Kill Bill.” But what is “Kill Bill” but another white man does Asian martial arts better tale, with a twist–the finale is a white man against a white woman.

Remember by this time, Bruce Lee had died (1940-1973) but his 1972 film “Way of the Dragon” was already famous. The movie featured Chuck Norris who was the same age as Lee. By 2000, Norris was an action hero in his own right but he had more authentic Asian martial arts credentials having won Professional Middleweight Karate champion title in 1968–a title that he held for six consecutive years. He was also in “The Wrecking Crew” which we see parts of in “Once Upon a Time…in Hollywood.”

Casting Carradine was like re-awakening the Kung Fu ghost of appropriation and yellow face more than bringing real Asian martial arts action to Tarantino’s grindhouse  milieu.  “Kill Bill” could have been an opportunity for an Asian or Asian American actor, but instead we get the guy who played a fake half-Asian man whose martial arts skills were passable (as opposed to a former champion like Norris).

At the time “Kill Bill” was in production there were Asian martial artists who were making successful movies. Jackie Chan (born in 1954) was younger than Carradine and had been in a “Rumble in the Bronx” in 1995. By 2003, Chan had already made his Hollywood breakthrough with the 1996 “Super Cop” and the 1998 buddy cop action movie “Rush Hour” with Chris Tucker.  In 2009, he teamed with Owen Wilson for “Shanghai Noon.”

We know from “Jackie Brown” and even “Pulp Fiction” that Tarantino doesn’t have problems with interracial relationships between black and white. From the roles he’s given Samuel L. Jackson and his recent revisionist “Django” with Jamie Foxx in the lead, we know that he can write and direct roles for black men.

Despite mention of “Kung Fu” in “Pulp Fiction” and the use of a Japanese sword, Asian Americans were not part of the narrative. Instead, there was a woman who gazes down on Ving Rhames’ Marsellus (Karen Maruyama as Gawker #1).

In “Once Upon a Time…in Hollywood,” Bruce Lee is used as a punchline to a joke. We now know that it could have been worse, but Brad Pitt and stunt coordinator Robert Alonzo voiced their concerns.

Lee is shown as being boastful and preening. Lee challenges Pitt’s character, Cliff Booth, to three-rounds with the winner being the one who leaves the other on the ground two out of three times. The first, Lee easily wins. The second has Booth sending Lee into a nearby car, leaving a Lee-sized dent. The third is interrupted when the owner of the car, stunt coordinator (Zoë Bell), arrives and fires Booth in anger. The scene is a flashback to 1966 or 1967, when Lee played Kato in “The Green Hornet” for 26 episodes.

According to a  Huffington Post article, Tarantino’s original intent was to have Lee lose, but because of Booth pulling a cheap trick.

“I know that Brad had expressed his concerns, and we all had concerns about Bruce losing,” Alonzo recalled. “Especially for me, as someone who has looked up to Bruce Lee as an icon, not only in the martial-arts realm, but in the way he approached philosophy and life, to see your idol be beaten is very disheartening. It really pulled at certain emotional strings that can incite a little anger and frustration as to how he’s portrayed. … There’s a certain mythology and mysticism about who Bruce Lee is, which is understandable. Being an Asian American myself, I definitely related to how Bruce was a symbol of how Asians should be portrayed in movies, instead of the old ‘Breakfast at Tiffany’s’ model that was really prevalent back in the day. … I had a difficult time choreographing a fight where he lost. Everyone involved was like, ‘How is this going to go over?’ Brad was very much against it. He was like, ‘It’s Bruce Lee, man!’”

In the Tarantino movie’s current timeline of 1969, Booth is virtually without work as a stuntman, but Lee has just spent the previous year training Sharon Tate for the 1969 (February release) “The Wrecking Crew.” We know that Lee will then go on to star in Hong Kong martial arts films in the 1970s. Yet we do not know the fate of Booth. He might become a director, like former stuntman Hal Needham did and provide successful pop culture cinematic vehicles for his actor BFF Rick Dalton (like Needham did for Burt Reynolds with “Smokey and the Bandit”). Writing for Slashfilm.com, Hoai-Tran Bui noted, “But from what we’ve learned of the original scene, it seems like Tarantino’s intent was solely to take down a Hollywood icon while elevating his own fictional character so as to make the film’s violent third act more believable.” And yet, where is the dog Brandy who (spoiler alert), does a lot of damage? 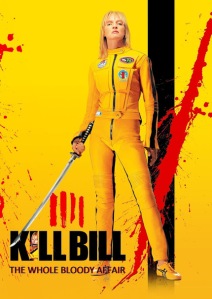 While Tarantino might admire Bruce Lee, one really needs to ask what that means. Does that mean Tarantino could see Lee or another virile East Asian man as an action hero or a protagonist in his movies?  He had the chance to write such a role in his “Kill Bill,” but he did not and one can’t convincingly argue there were no East Asian men at that time who could have played the part of Bill. In “Kill Bill,” the Asians and Asian Americans were part of the exotica Japan, enemies mowed down to show a superior white woman and white man. In a sense, the Bride is Bruce Lee as symbolized in her clothing.

We’ve seen Asia used similarly in other more recent movies such as in “Black Panther” (white and black superiority to Asians) and in “Avengers: Endgame” (Clint Barton/Hawkeye in Japan).  Both movies use Asian martial arts in some manner, an appropriation without due respect for the original cultures.

Tarantino only made his case worse when commenting in Moscow at the 7 August 2019 news conference for “Once Upon a Time…in Hollywood,” saying, “Bruce Lee was kind of an arrogant guy,.The way he was talking, I didn’t just make a lot of that up. I heard him say things like that to that effect. If people are saying, ‘Well he never said he could beat up Muhammad Ali.’ Well, yeah, he did. Alright? Not only did he say that, but his wife, Linda Lee, said that in her – the first biography I ever read was Linda Lee’s ‘Bruce Lee: The Man Only I Knew, ‘and she absolutely said it.”

Bruce Lee experts weighed in on Twitter, fact-checking Tarantino (The LA Times relays the opinion of Lee’s widow, Linda Lee Caldwell, via their daughter Shannon as “awful.” ). Matthew Polly, author of “Bruce Lee: A Life,” felt inspired to put out an 11-part tweet. According to Polly, Linda Lee was quoting a TV critic who wrote: “Those who watched him would bet on Lee to render Cassius Clay senseless if they were put in a room and told that anything goes.”

Polly was also critical of the rest of Tarantino’s explanation which included, “If Cliff and Bruce were fighting in the jungles of the Philippines in a hand-to-hand combat fight, Cliff would kill him.” Polly’s reply:

WRONG: First, they were fighting on a Hollywood backlot, not an Asian jungle. Second, it takes years of relentless training to master unarmed combat. Soldiers are rarely experts, because it forms only a small portion of their training.

Maybe fictional Cliff could beat up Bruce Lee—he wasn’t invincible—but not because 20 years earlier he shot a bunch of Japanese soldiers.

Ben Pearson writing for Slashfilm.com, writes about Lee and Muhammad Ali for whom Lee had nothing but respect. Variety articles also disputed Tarantino’s depiction, quoting Lee’s protégé and training partner Dan Inosanto: “Bruce Lee would have never said anything derogatory about Muhammad Ali because he worshiped the ground Muhammad Ali walked on.”

Admiration is supposed to be “a feeling of respect and approval,” but if you can’t admire a person or a culture and find a place for them as an  equal, a hero or lead character, that’s not really respect at all.  Tarantino had the opportunity to right a wrong that was the yellow face in “Kung Fu,” but chose instead to perpetuate it in “Kill Bill” with the same actor, casting a shadow over his original intent in “Once Upon a Time…in Hollywood,” and even the way he, following Pitt’s advice, eventually decided to portray Bruce Lee.

[Edited to add comments by Tarantino and Matthew Polly, 14 August 2019]