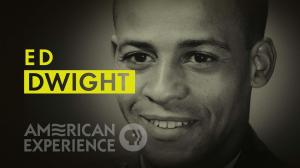 At the peak of his involvement as part of the PR goodwill machine for NASA’s astronaut program, Ed Dwight Jr. was receiving 1,500 letters a day and he needed a secretary. Now 56 years later, the mail has trickled down to about 10 a week.

“Most are from history buffs. A lot are from school kids. Tons are from Europe–Holland, Switzerland and German.” All that and the recent renewed interest as the 50th anniversary of the lunar landing nears doesn’t surprise Dwight, who chuckled, “I didn’t think I was going to live this long.”

Dwight is featured in the PBS American Experience three-part documentary: “Chasing the Moon.” Dwight never made it to the moon, but as the first African American astronaut candidate, he still made waves. When he got confused with another Ed, Ed White who was the first US astronaut to walk in space, his importance became evident to the other astronauts. Yet it would be two decades before a black astronaut would get into space in the US program.

There were a number of obstacles to diversity. As the documentary notes, due to the political power of Southerners  in the House and the Senate, many of the space-related facilities were based in the Deep South.  When the Kansas-born Dwight joined the astronaut program in 1962 he left “a great Air Force career.” “I had such a sterling career (in the Air Force” and “that’s why I was asked. “I didn’t apply for this. I didn’t ask to do it,” he recalled, but “I was asked by the President of the United States.” From there it “became a real fight on the part of everybody.”

According to Dwight, to get elected, Kennedy needed the black vote and through Harry Belafonte, Kennedy was introduced to Civil Rights leaders. Once elected, one of those leaders pressured Kennedy to have an African American astronaut.

Dwight says, while Martin Luther King Jr. was “dead set against it” and Rev. Ralph Abernathy would lead about 500 protestors to the Kennedy Space Center at the time of the Apollo 11 launch in 1969, Whitney Young, who became executive director of the Urban League in 1961, “was concerned about young black people getting into math and science” and “placing people in decent jobs.”

Robert Kennedy made the arrangements, but without the presidential support  (JFK died in 1963), Dwight felt the program faltered on diversity and left in 1968.

In retrospect, he said that the US culture wasn’t ready for a woman or a black man to be “heroic.” NASA needed to make the original seven astronauts heroes because “NASA needed money.” Although Sputnik and the Russian program has “scared us a little bit” and the “scientific community got all worked up about it,” the rest of America didn’t care. They were thinking “How does that affect me and my life?” The astronauts had to be seen as brave. The public had to realize “they could get killed.” And yet, he said, “You put a black guy in there and America is going, ‘Wait a minute. A black guy can do it and back then black guys aren’t heroes. If a woman can do it, if a black guy can do it, then they (astronauts) aren’t heroes. Black guys and women aren’t heroes.”

Yet Dwight was a hero to some, receiving thousands of letters. He even received marriage proposals. And there were, of course, hate mail. “Very, very little hate mail,” he recalled, “All the hate mail I got was from the North and not the South. I don’t remember one hate mail from the South.”

Of course, recent movies have shown black men and women as heroes. Dwight has been able to memorialize some local black heroes as an artist. After leaving military service, Dwight, who received a degree in Aeronautical Engineering from Arizona State University before he entered astronaut training, went on to earn a Master’s in art from the University of Denver. Some cosmonauts and astronauts have been artists as well, most notably Apollo 12 astronaut Alan Bean (1932-2018).

Dwight had previously worked with people on various documentaries, some that ran out of money. At one time, 15 years ago, he had a movie contract but nothing came of it after a certain executive got fired. The PBS documentary “Chasing the Moon” was not on his mind particularly because he was first contacted about the documentary three years ago.  Now, he’s a hard man to catch; he’s been on the road traveling to different related event. All of the attention over Apollo has put Dwight behind on his commissioned art work and undoubtedly there will be more letters because in 2019, women, black men and black women can be heroes.