This morning, 23 Jan. 2017, I got up and checked my Twitter stream and noticed there’s a Twitter account devoted to debunking CNN (@renomarky as “CNN Is Piece of Shit”) that is spreading fake news.

What do we know about @renomarky is the person joined Twitter in 2014 (August) and is based in “Sin City.”  The bio states that “CNN, globalists spreading propaganda calling themselves journalists while demonizing all opposition with race!” How that relates to #ChuckyTheClown is not clear, but @renomarky also endorses #DefundSanctuaryCities and #CNNPOS.

More research indicated that someone, possibly a “Christiane from Texas” was spreading this photo to different sources, or at least to ChicksOnTheRight.com. COTR published the photo on 22 Jan. 2017 without checking, writing: “One of our amazing readers sent us picture of the most VILE sign she saw as part of a Women’s March this Saturday, and as we’re 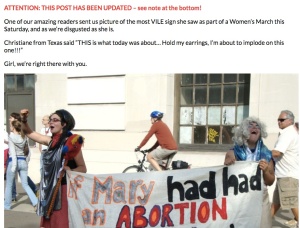 disgusted as she is.”

The problem with not checking is that this same photo was posted on Reddit.com three years ago by AntitheistsCOUK. Thus it was not at the Saturday 23 Jan. 2017 Women’s March.  The context isn’t clear. Was it a protest? What kind of protest? Was it an atheist or antitheist event? Was it part of a shock art performance piece or advertisement for an underground play by students or activist professional actors? If you read the discussion, you’ll see that some people didn’t not agree with this tactic.

ChicksOnTheRight.com did write something that was almost a retraction after readers informed them of their mistake, but refused to take it down, writing:

If this was not taken during any womens’ marches this past weekend, fantastic.  But regardless, it exists.  It’s undeniable, and it’s representative of the kind of vulgar, disgusting nonsense often seen from the progressive feminist left. (See: pretty much any Code Pink rally.)

However, the Chicks took a swipe at Code Pink, without any proof that this sentiment exists in the U.S. or at Code Pink.

Another website, KeepLifeLegal.com, wrote about this sign on 23 March 2013 under Feminazi and linked to the same photo but did not mention that the photo was from the UK. KeepLifeLegal.com is a US-based blogger who has “testified for both the House and Senate Committees on behalf of the Post Abortive woman.”

During a pro-abortion clash with pro-life organizations in Quebec in 2012, there was a similar slogan used “Ah si Marie avait connu l’avortement, on n’aurait pas tous ces emmerdements,” according to LifeSiteNews.com.

There was on 6 Nov. 2016, a post with a different photo where a woman did have a sign “If Mary had an abortion, we wouldn’t be in this mess.” That was in Charlotte, North Carolina during a religious pro-life campaign. The person who made the post didn’t directly engage with the person holding the sign so there is no way of knowing if the woman voted for Donald Trump or Hillary Clinton or Jill Stein. It isn’t clear if she considers herself a feminist or even a feminazi. It isn’t clear if she is Christian or atheist.

What this situation does indicate is how easily one can be misled. ChicksOnTheRight trusted one of their readers who made a claim about a photo that was untrue. Chicks on the Right were wrong, but so was @renomarky whose current mission is to debunk CNN News while not practicing good journalistic practices.  Chicks on the Right and CNN Is Piece of Shit were wrong about #WomensMarch, but right about how easy it is to spread fake news.

*At the time of publication, @renonarky has yet to respond to my reply.