Thursday morning, I got attacked by a Utahraptor. Penelope Cruz Missel, my fushia pink stegosaurus, was there to defend me and I was sure to rawr back because one should never show fear in the face of predators, even when they are prehistoric. Don’t worry.  I’m not delusional;  I’m not in a movie, but I was being confronted by life-sized animatronics backstage at the Honda Center. The show “Walking with Dinosaurs: The Arena Spectacular” is at the Honda Center until Sept. 7 and then will be at the Staples Center from Sept. 11-14. 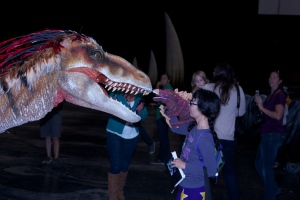 Watch out for those Utahraptors. They can be a bit cheeky.  They can both show affection, be gentle to a crying, frightened child or be aggressive toward the more assertive people backstage.

Based on the award-winning BBC TV series, this tour is in Anaheim until Sept. 7 when it heads up to the Los Angeles Staples Center for seven performances, Sept. 11-14. This show has been changed slightly, and the dinosaurs have evolved. Now some of the creatures have display feathers, head crests and tail fans.

The show includes ten species from the 200 million year rein of the dinosaurs including all of your favorites: Allosaurus, Stegosaurus, Torosaurus, Utahraptor and Tyrannosaurus Rex.

The full list of dinos animated in this show:

Many of the technologies used in “Walking with Dinosaurs: The Arena Spectacular” are borrowed from film. The computer software and hardware are based on the systems used to control animatronic creatures in feature films.

Backstage we met up with Matt Olver, the suit captain. That’s sort of like being a dance captain except his team have ultra fit actors who carry 100-pound costumes on their backs.

How do you auditions for that? According to Olver, “The audition process requires physical endurance and strength tests.” Don’t worry. It isn’t like “American Gladiator” or “American Ninja.”  For Olver, who is an English actor, it was a random audition. He had to do one leg squats, burpees (stand, drop to squat with hands on ground, then kick feet back to be in a push-up position and then returning to a squat to jump up from the squat position) and shuttle sprints (beep tests).

“Basically, puppetry is secondary because you can learn to handle the suit and give it personality,” Olver stated.

Once inside the dinosaur suit, your right arm stabilizes the neck and moves the head up and down. The left hand controls the eyes and the neck joints. You can’t see forward, but like a horse, you can see left or right, but not in front. That means you have to turn your head a lot to figure out what’s in front of you.

In the Utahraptor suit, you think predatory. Olver explained, “We studied birds, lions and wolves and looked at how they hunt and eat. After you understand the basics (of the puppetry), the whole performance evolves. Olver said the Utahraptors are smart, interactive and predatory. “For the baby T-rex, he’s delicate, like a naughty puppy. He’s small, but he thinks he’s big.” The interaction between the mother T-rex and her baby is one of the highlights of the show.

The big dinosaurs such as the T-rex are run by three people. One is the driver underneath the actual animatronic dinosaur. He’s in control of the speed, Up in the voodoo lounge, you have one person doing the body and tail, in this case Graemme Haddon (“Farscape”), head of puppetry, while another person, Danny Miller, works on the fine movement and the sound effects.

On opening night, we were seated right next to the Voodoo Lounge, and could see the show from their perspective. Our first time we were on the side, viewing from the first tier up from ground level.  That time, we got a real sense of the height of the dinosaurs as they came eye-level to us. 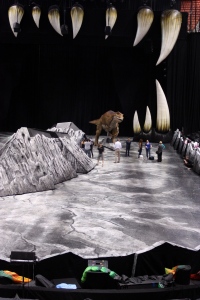 The Voodoo Lounge is a platform build up on the back section of 201. The animals enter on to a stage that is made of tiles that are magnetized at the seams.  Haddon works on the voodoo rig, a stripped down version of the dinosaur’s skeleton made in miniature. Each hand manipulation of the rig sends electronic signals and the animatronic puppet replicates that action.  Next to him an auxiliary puppeteer uses a keyboard to operate the mouth, eyes and sound effects. All this is coordinated by using headsets, particularly since the choreography during the fight scenes can be complicated.

This time, from just to the right of the Voodoo Lounge, we got a fuller sense of the choreography. The animatronic dinosaurs present themselves to each section of the audience, making sure they get a good view of front, back and side. This is theater on a thrust stage and puppetry at a high level.

Tickets are also available through Ticketmaster.