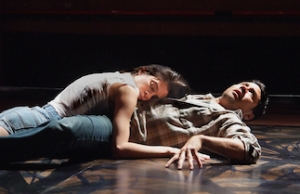 At Boston Court in Pasadena, you don’t expect a normal or average rendition about fatherhood, and Octavio Solis’ “Se Llama Cristina” doesn’t give you a father and daughter that you immediately can recognize and relate to. This exploration of parenthood left me cold and a bit headachy.

I am not going to be a father and will likely not be a mother. What I know about parenthood is second-hand knowledge except for being the mother several times over to a succession of four-legged fur people.  Being a father is biologically easy, but emotionally not automatic since pregnancy is a second-hand experience for men.

“Se Llama Cristina” means “Her Name is Cristina.” The titular character’s presence is felt and she’s not really represented in the play and only appears (as a prop) quite late. Set on a stage with red colored floor that breaks to frame a black rectangle on the floor with a rectangle of white lighting that hovers a few inches above the floor, the play begins with two people inside this abstract room. They are slumped against each other, a man (Justin Huen) and a woman (Paula Christensen). They do not know each other. They barely know who they themselves are.

You don’t immediately know that the hovering rectangle is a light until later when it raises and lowers. At the back of stage is a door and at the top is an abstract painting that is often throbbing with color and changing as the play proceeds.

The couple isn’t without complications. The man’s name changes from Mike to Miguel to Miki. The woman’s name is Vespa or Vesta or Vera. And there is another man with the biblical name: Abel (or Abe). He complications our love story.

Solis writes in the program notes that he first began this play when his wife was pregnant and he was “scared at the prospect of” becoming a father. You can see the fear of not only knowing the woman that his wife becomes as a mother and his daughter’s romantic future. He had “night terrors” and was only able to finish the play when his daughter had grown up.  And yet, he tells us that the “terrors of fatherhood never go away.”  Perhaps that is the coldness, the despair of worry that is also manifested with the presence of the shadowing other man.

Director Robert Castro could tighten up the pace a bit and perhaps make the lighting choices more comprehensible. Yet having the mystery deepen also distracts and disorients us and that might be a valid choice as well.

“Se Llama Cristina” run 80-minutes without intermission. If you’re feeling the cold despair of fatherhood creeping upon you, or, perhaps even better yet, if you’ve overcome them and have fallen into a relaxed grandparenthood, then this play might speak to you. Don’t expect the usual or the ordinary from Boston Court and this play, which is part of a rolling national world premiere, surely meets that criteria.