As a freshman college student, I found I raged against art history for its inherent racism and sexism. I was not then a writer although I obviously did write and was required to write for my courses. I was determined to be an artist, particularly because I could recall a moment in Balboa Park during an art class sponsored by the San Diego Museum of Art that often took us into the famous San Diego Zoo. But on that day, we were out near the fish pond, outside of the Botanical Building, sitting on the grass. The White boy with closely shorn hair told me that girls could not be artists.

My art history books pretty much told me the same thing as did, inadvertently, the predominately male teachers. By that time, I had already read Susan Brownmiller’s “Against Our Will: Men, Women and Rape. I had and would argue with my mother about myths such as a woman was asking for it by the way she was dressed.

But I’d like to talk about other myths. Watching “Hadestown”at the Ahmanson, I was pondering the casualness of rape intertwined with the myth of Orpheus and Eurydice. Eurydice ran to escape rape and trod on a poisonous snake. She died from that bite. Orpheus goes before Hades/Pluto who had abducted and raped his own niece, Persephone and made her his unwilling queen. Persephone and her mother, Demeter, had no recourse, but to beg men, or rather male gods, to do something. Demeter, herself, had been raped by her younger brother, Poseidon.

In myths where the male god gets access to the woman as a swan, as her husband, as a bull, this is also rape. The woman is not giving consent. And men are taught it is permissible to fool, deceive and even abduct a woman, particularly if one is a superior man, a king, a hero.

Rape is what we need to talk about in art and art history. It’s there in the portrayal of the Rape of the Sabine Women. Ancient rape laws often were more about the rights of the male head of the household. 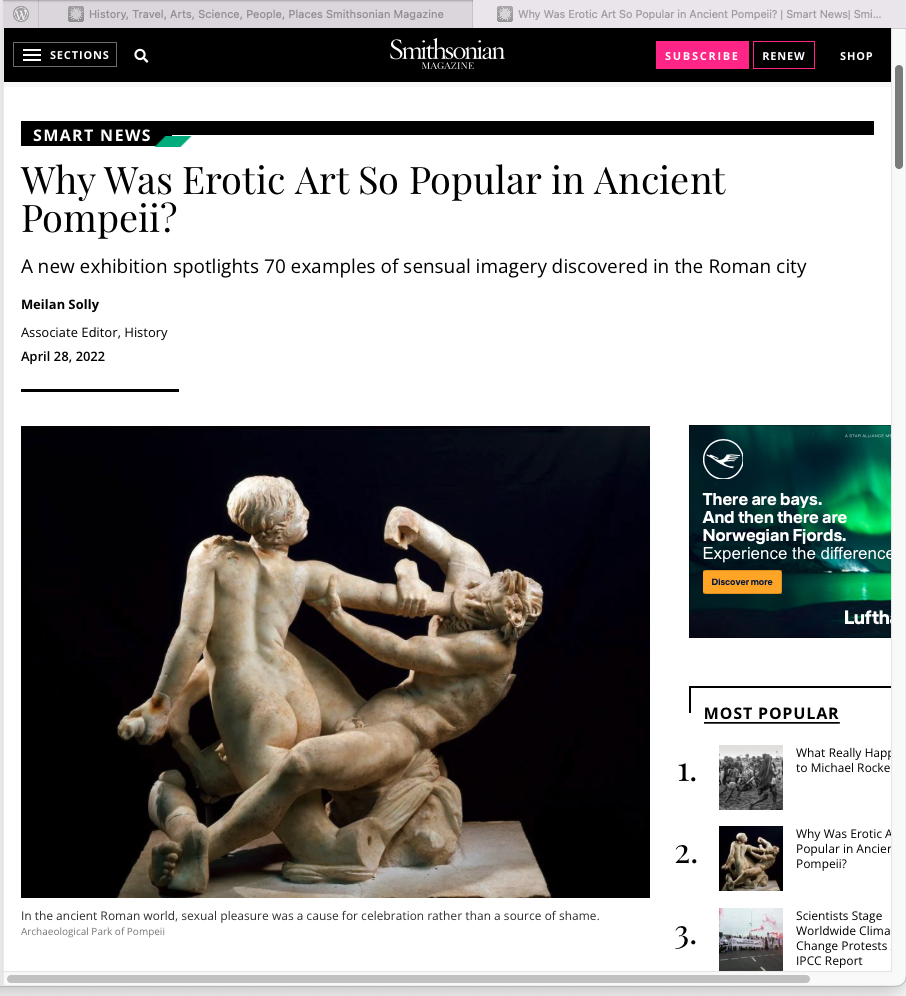 The Role of Women in the Roman World

The Roman Empire in the First Century

According to the PBS article on women in the Roman Empire, women were not equals to men. They were under the authority of their fathers and then their husbands except for special circumstances. While wealth and status provided some freedom and a few women had their own businesses, these were rare. What was common were female slaves.

According to an article in WorldHistory.org, clothing helped signal a woman’s status. The distinction between a respectable woman and one who as not (because there was not third category) was an important legal point.

The distinction between these two groups was not just a moral one for prostitutes and other lower class women had even fewer rights than women of a higher social status. Prostitutes and waitresses, for example, could not prosecute for rape and the rape of slaves was considered merely as property damage sustained by the owner.

If you know anything about swans, you’d never want to be naked in front of one.

Nesting swans can be very aggressive to humans who come too close to their territory. Mute swans will attack humans, especially small children, who get too close to their nest or young. Canoeists, kayakers and those operating personal watercraft have also been attacked when too close to mute swan territories.

Who, What, Why: How dangerous are swans?

Painted on the wall of a Pompeiian bedroom, the artwork shows a nude Leda smiling invitingly as a swan nuzzles against her chest.

“[The scene] sends a message of sensuality,” Massimo Osanna, then-director of the archaeological park, told CNN’s Barbie Latza Nadeau and Hada Messia in 2019. “It means, ‘I am looking at you and you are looking at me while I am doing something very, very special.’ It is very explicit. Look at her naked leg, the luxurious sandal.”

This is essentially a woman as an object of desire for a male gaze. She is inviting the viewer, she is aware that she is being viewed and she is served to the male viewer by the artist (who was also likely male) as an appetizing morsel for man’s consumption. She is consenting to an act that is improbable and unbeknownst to her a deception. The swan is Zeus in disguise. Was she willing to have sexual intercourse with a swan? Maybe, but unlikely. However, she was not consenting to sexual intercourse with Zeus. The message here would seem to be that it is acceptable for a man, particularly a superior man to use deception to obtain carnal knowledge, even of another man’s wife. Zeus rapes Leda on the same day that her husband Tyndareus consummates his marriage to Leda. This is something like the droit du seigneur (“lord’s right”) or the ius primae noctis (“right of the first night”) which is supposedly the right of superiors, such as kings, lords and masters to have sexual relations with subordinate women, especially on their wedding nights. This would seem to say that even kings like Tydareus who was the king of Sparta, are subject to this rule. The image of Leda is not meant to be arousing to either lesbians nor heterosexual women. It is an instructive myth of how women are to behave and can be excused for becoming the prey. If a queen can be victimized by a god, then so can other women be victimized by their masters, but the compensation would be in the exploits of their superior children and the women may be known in history as the mother of legendary people.

Even centuries later, Leda’s rape is inspiration for art and literature. Consider William Butler Yeats’ 1933 poem “Leda and the Swan.” Leda’s rape is eroticized and not condemned. She is depicted as a “girl”  who is “caught” and “He holds her helpless, breast upon his breast.” Yeats asks, “How can those terrified vague fingers push the feathered glory from her loosening thighs”? In the end, she is “So mastered by the brute blood of the air.”  Does Yeats, a White man, teach boys and men how to please themselves? And girls and women reading this, do they learn to resist or to submit?

In today’s world, who thinks they are gods, superior men? And can they or have they been getting away with rape? That is the whole dialogue of Me Too. Even centuries later, famous men, powerful men have been getting away with sexual harassment and rape. In light of that, the Smithsonian article seems to hark back to a different time, what should be a bygone era. It is an instructive myth of how women are to behave when raped or deceived by a man into a compromising position. He’s already there; she should just give in because her reputation is already ruined.  If a queen can be victimized by a god, then so can other women be victimized by their masters, but the compensation would be in the exploits of their superior children and the women may be known in history as the mother of legendary people. Don’t complain; wait and see what good may come of your rape.

The questions the Smithsonian Magazine should be asking are:

I read that article and thought, why are art historians still being so complacent about the depiction of rape, coercive sex and abduction? Abduction and rape seem synonymous in Greek and Roman myths.

Are teachers today making note of this or are they just glossing over these classical examples of rape culture?

In today’s world with Me Too and Black Lives Matter movements having come to prominence, the question should be If the stately, fully clothed statues of Confederate Heroes of the American Civil War can be seen as creating a hostile environment for former slaves and African Americans generations later, then wouldn’t the depiction of rape create a hostile environment for all women in Pompeii? Rape isn’t sex-positive. Rape isn’t a source of sexual pleasure for the victims. Rape should be a source of shame. We should not be shamed into thinking otherwise, particularly not by art exhibitions and an article in the Smithsonian Magazine.