Have you gone on vacation with your parents? Imagine going on the road with your 71-year-old father, Carl (Arnold Schwarzenegger), who has only recently gotten in touch with his feelings and your 62-year-old mother, Sarah (Linda Hamilton), who is bitterly distrustful of your father. You’re going to be traveling with your biologically unrelated sister, Dani (Natalia Reyes), whom you’re responsible for even though you’re the same age. Well, not actually the same age because in this timeline, you haven’t been born. This is what the 2019 “Terminator: Dark Fate” is about and if you’ve been following the Terminator franchise, you know that time travel and changing the future is what this series is all about.

You are, after all, Grace (Mackenzie Davis), an enhanced super soldier from 2042. You were sent to protect Dani who will be vital in the war against AI called Legion, a threat that rose because Skynet wasn’t there to beat them down.

Now, Sarah hasn’t forgiven T-800 Carl because in 1998, Sarah and her son John were on a beach in Livingston, Guatemala when T-800 successfully killed John. But that was three years after Cyberdyne Systems Corporation (“Terminator 2: Judgment Day”), when a future John Connor sent back a reprogrammed T-101 Terminator  to protect John from a T-1000.

Grace and Dani cute-meet Sarah because since the time of John’s death in 1998, Sarah has been receiving cryptic messages giving to locations of arriving Terminators. That turns out to be from T-800 Carl who has essentially been cyberstalking Sarah and fueling her revenge rage while he’s become a family man, living in a sexless but emotionally fulfilling relationship. Carl has a drapery business in Laredo , Texas. He helped Alicia (Alicia Borrachero) escape from an abusive relationship with her son, Mateo (Manuel Pacific). 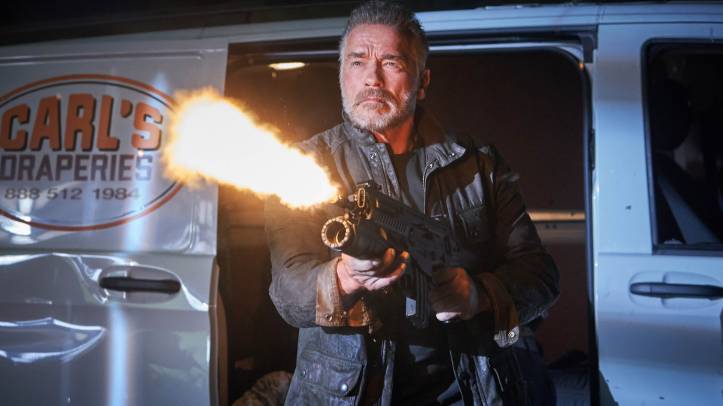 Carl tells Sarah, “Caring for this family gave me purpose, ’cause without purpose we are nothing.” In turn, Carl attempted to give Sarah purpose, to give meaning to John’s death.

Carl and Alicia live as husband, wife and stepson. He sends Alicia and Mateo out of danger’s way and Carl, Sarah, Dani and Grace go on a road trip, pursued by an advanced Terminator, Rev-9 (Gabriel Luna), a shape-shifting AI that can separate into two autonomous units, both deadly.

Think of this as a road trip between bitter parental figures and two daughters–Grace the badass warrior teaching the other, Dani, how to be a warrior. The whole family is being stalked by an obsessed man.

While male actors can be action heroes even as old are Arnold Schwarzenegger and even if you’re not a bodybuilder–look at the 69-year-old Liam Neeson who just turned in that terrible 2021 Netflix action film, “The Ice Road”–seeing Hamilton back as Sarah is well-worth the ride. And anytime you think your family road trip was bad, here’s proof it could be worse, especially if you were wrapped up in several time travel line variations.

Director Tim Miller was visual effects artist and animator before he became a director and he’s the right guy for a Terminator film. The three-man team of David Goyer, Justin Rhodes and Billy Ray wrote the screenplay and give the women their due. With Terminator, you just don’t want to  overthink the past, present and future timelines. Sit back and enjoy the CGI robots and the fights and hope to be as tough as Hamilton in your sixties but that your family vacations never involved robotic assassins and a stalker. Seeing Linda Hamilton team up with Arnold Schwarzenegger for another round at the Terminator timeline, is well-worth the time.