The PBS Independent Lens film, “9to5: The Story of a Movement,” tells the story how women changed the workplace, inspired a film starring Jane Fonda, Lily Tomlin and Dolly Parton. Even the song, springs from the woes and triumphs of everyday women and women of color were there. Jane Fonda states, “The song was married to a movement.”  “9to5: The Story of a Movement” is currently available to stream on Netflix.

To set the stage, the documentary, directed by Julia Reichert and Steven Bognar (“American Factory”), shows us another documentary: “Films of the Modern Women: Is a Career in Clerical Work for You?”

What we learn from that is 70 % of jobs are filled by women and that many of the women have bachelor degrees like Patty McGrath. Doing their best to limit their ambitions, they concentrate on getting their wpm up to 100 and doing “finger gymnastics.”  As woman from 9to5 recalls, her father told her, “Well, girls who are walking encyclopedias should remember reference books  are never taken out.” Marriage was the focus for women.

What “Films of t 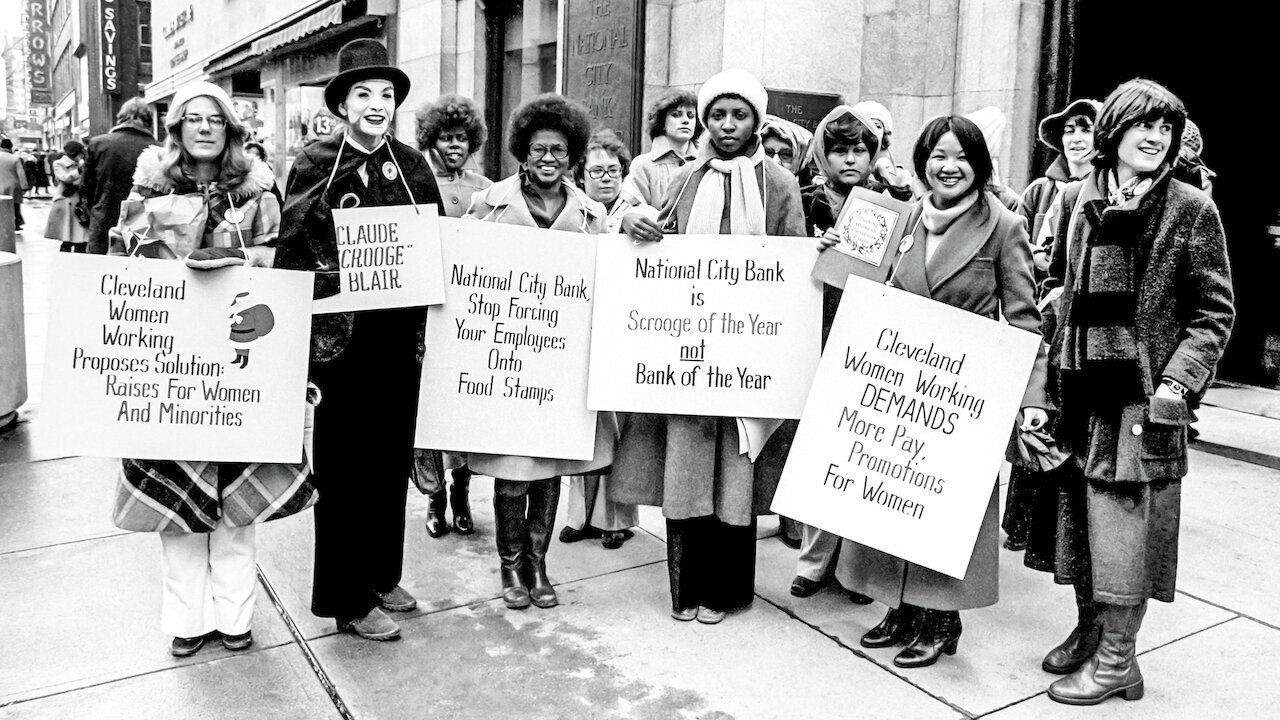 he Modern Women” doesn’t tell us is the women were subjected to hazy job descriptions if they existed at all. They could be fired for becoming pregnant. They were asked to do personal things for their male bosses like making coffee, peeling carrots and stitching up their split trouser seams and scouting out girls at eating establishments. Some of the application forms asked illegal questions and there were other things like sexual harassment at a time when the phrase had yet to be formulated.

Historically, it was two rivers of women in the work place, educated women who might or might not be married and feminists looking to change things.  Unseen nobodies, when these women organized, “It’s almost like the wallpaper came alive. From the start, the directors of this documentary make clear this wasn’t a White women’s movement. Prominent among them is Chicago-born Jewish American Karen Nussbaum who came from a family of activists and co-founded 9to5 in 1973. Nussbaum bonded early with Jewish American Ellen Cassedy. In Cleveland, Chinese American Mary Jung broke her families expectations, organizing in Cleveland.

Jung recalled her parents saying,  “You don’t need to go to college.  It would be good enough for you to be a good secretary and to work in an office, find a nice husband and have children.”

When the first meeting was organized, 150 women showed up and the decision was made to form committees.

The questions for the Forum for Women Office Workers was:

The organizations also taught women how to present themselves.

The main point was: If we don’t fight for dignity and respect on the job, who’s gonna fight for us?  Women clerical workers, not male laborers, were the largest sector of the workforce. One of their first victories were against the Boston Survey Group with was a secret organization of bosses who illegally were fixing the wages across the board. Women understood that if your bosses were organized, you needed to be organized.  The organization 9to5 formulated an office workers bill of rights. Eventually 9to5 became an umbrella organization.

While working to organize, the women had to recognize a disconnect. Jung said, “Women in Cleveland Women Working considered themselves mainstream women, didn’t believe that they were feminists, but yet if you asked them what they believed in, they believed in all the same things feminists believed in. And so we couldn’t have a ‘demonstration’ because a demonstration is considered too radical for our members. So we would have “actions.'”

That doesn’t mean there wasn’t racism and class problems within the organization–jobs like data entry were reserved for Black women (Remember “Hidden Figures”?), but these women persevered. Renia Clay, a member in Atlanta, remembers how they brought women together, saying,  “I always credit Verna Barksdale [Atlanta 9to5 organizer]. She would always pair a Black person and a White person together.  A younger person and an older person.  And that helped form relationships in the organization.”

Not all of their goals were made, even now.

My criticism would be that the documentary uses examples from the “Mary Tyler Moore Show,” but Moore played an associate producer and not a secretary. This is a minor point. The movement 9to5 did make changes in the United States, they did inspire a movie and a Dolly Parton song. That’s a lot to be proud of and this documentary does outline useful strategies that can be a starting point for women today although it is sad to see that feminist goals were made by disowning the label feminist.

After seeing this documentary, I feel it would be fitting if a remake was made of the Jane Fonda, Lily Tomlin and Dolly Parton movie, the cast would be more diverse. “9to5: The Story of a Movement” is currently available to stream on Netflix. The fictional 1980 comedy, “9 to 5” is available to stream on Amazon Prime Video. This documentary should be required viewing for Women’s History Month and for everyone studying US history.

Karen Nussbaum: Nussbaum is he founding director of Working America and the Working America Education Fund. She was a founder and director of 9to5, the National Association of Working Women and president of District 925, SEIU. Karen served as the director of the U.S. Department of Labor Women’s Bureau during the first Clinton Administration, the highest seat in the federal government devoted to women’s issues.

Ellen Cassedy: Cassedy is an author and translator. She is a former speechwriter in the Clinton Administration and a former columnist for the Philadelphia Daily News. Nussbaum and Cassedy wrote the book on the movement, 9to5.  Nussbaum and Cassedy met in college at the University of Chicago. They bot moved to Boston where they started a 9to5 newsletter in 1972.

Renia Clay: Senior attorney who has represented hundreds of children in foster care.

Anne Hill:  Anne Hill worked at SEIU 925, then in politics and health care representing the needs of working class communities. She was a Government & Community Relations Director at MetroHealth System Cleveland.

Mary Jung: Jung is currently a commissioner on the Commission on the Status of women from 2013 to the present. She is also the director of Government Relations and Community Affairs for the San Francisco Association of Realtors. She was a Civil Service commissioner for the City and County of San Francisco at City Hall. Chair of San Francisco Democratic Party, 2012-2017.

Debbie Schneider: Debbie Schneider went on to become the national president of SEIU 925 and a top leader at SEIU on global organizing and leadership development. SEIU International Vice President.

Janet Selcer: Her daughter Deborah is an SEIU organizer.

Carol Simms: Carol Simms was an SEIU organizer until she retired.

Lane Windham: Windham is the Associate Director at Georgetown University’s Kalmanovitz Initiative for Labor and the Working Poor. Her book about union organizing in the 1970s, Knocking on Labor’s Door: Union Organizing in the 1970s and the Roots of a New Economic Divide, was awarded the Organization of American Historians’ 2018 David Montgomery Award. Windham spent nearly twenty years working in the union movement, including as media outreach director for the national AFL-CIO and as a union organizer in the South.