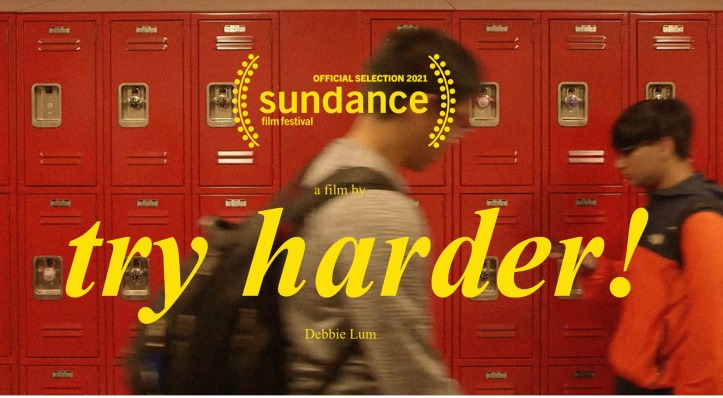 Despite my good grades in high school, I wasn’t terribly ambitious. I wanted to be an artist and didn’t aim for any Ivy League or private colleges. My father had by then died of complications of MS and thus couldn’t offer any financial assistance. Neither my mother nor father had a college degree. As first generation college students, it’s a credit to my parents’ low-key pressure that all three of us graduated from University of California colleges with degrees.

“Try Harder!” is about kids in San Francisco who are driven to excellence and under pressure to get into the best colleges and part of that plan includes being enrolled in Lowell High School. Lowell is one of two public schools in the San Francisco Unified School District that mandates its students to meet special requirements. The school has a graduation rate of nearly 100 percent and feeds most of its students into the University of California system. I might have brushed shoulders with such students during my time there, but it meant nothing to me. The mindset of the students and parents are foreign to me, but they are infinitely more savvy about academics and the socio-political aspects of the academic admissions game.

During the 2015-2016 academic year, the students at Lowell were predominately female (58.8 percent) and Asian (56.7 percent). White students were 15.2 percent; Latino, 9.9 percent and Filipino 7.9 percent. African American students were 1.9 percent. The district demographics are 35 percent Asian, 31 percent Latino, 9 percent Black and 14 percent White. Asian Americans are over-represented in Lowell, but that comes with a price and race is very much in the minds of the five students this documentary follows: four seniors and one junior. 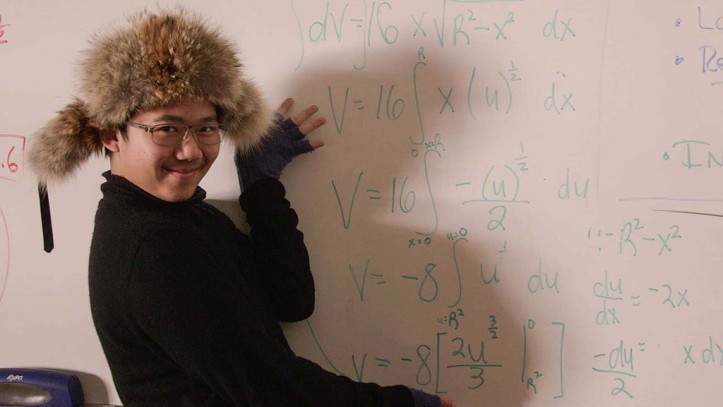 Rachael is biracial and forming her racial identity.  Sophia is the driven tennis team captain and school newspaper editor.  Ian’s parents aren’t pushing him for grades, but self-discovery.  Alvan Cai is an adorably geeky math whiz.  Shea, who is the only junior, has complications at home, but still keeps up the competitive pace. Director Debbie Lum (“Seeking Asian Female,” 2012) is herself a graduate of an Ivy League college, graduated from Brown University in 1991. Born in Virginia and raised in St. Louis, Missouri, she got her MFA in cinema from San Francisco State University. She is an outsider to San Francisco, but someone invested in the idea of the Ivy League education.

When one student said Lowell “looks like a prison,” I chuckled. I once went around to different high schools in Los Angeles County, from the real Beverly Hills High School to the East Los Angeles and Inglewood high schools comparing the different resources in journalism. Some high schools not only have metal bars, they also had metal detectors. Random metal detector searches ended in 2019 for LAUSD. Armed security was provided at certain events, but that was in a pre-pandemic world.

In the last decade, entry into schools like UC Berkeley has become increasingly competitive. In this documentary, students learn that acceptance is based on more than just grades. Schools are looking for the whole package. One science teacher notes that during the 1990s a B-average student could still easily get into UC Berkeley. The acceptance rates have dropped and more students are applying for those spots.

In “Try Harder,” a science teacher notes that back in the 1990s, it was easy for a student to get into UC Berkeley with a B-average. Today, many schools like UC Berkeley have dropped their acceptance rates by 50% or more, making it harder than ever to land an increasingly coveted spot that is based on a lot more than grades nowadays. Looking at the Diversity Data Dashboard for UCB, Asians are not even listed. Instead, UCB notes that Africans Americans are seven percent California’s population, but 3 percent of the undergraduate student body; Latino/Hispanic are 38 percent in California, but 14 percent of the undergrad population. Native Americans are two percent, but only one percent at UCB and Pacific Islanders are 0.8 but 0.2 percent of the undergrad population. For disabled students, California has roughly 10 percent, but only 6 percent representation in the student body. Asian American is divided up by nationality (Chinese, 16.1 percent;  Filipino, 3.2 percent; Japanese, 1.1 percent; Korean, 4.8 percent; Other Asian, 1.2 percent; South Asian, 11.6 percent;  and Vietnamese, 3.8 percent) for a total of 41.8 percent.

If you are from Los Angeles or attended UCLA like I did (or are at least aware of the phrase “University of Caucasians Lost among Asians”), here’s the demographics on the undergrad level: 27.9 percent Asian, 26.6 percent White, 22.1 percent Hispanic/Latino, 11.6 percent non-resident alien, 2.4 percent Black/African American and 7.9 percent ethnicity unknown. Los Angeles County is 48.7 percent White, 44.6 percent Hispanic/Latino of any race, 11 percent African American and 10 percent Asian.

Beginning in 2014, Students for Fair Admissions (SFFA) brought a case against Harvard university that “centers on whether the school’s admissions process forces Asian Americans to clear a higher bar to get in.” In 2019,  Federal District Court Judge Allison D. Burroughs wrote, “the Court finds no persuasive documentary evidence of any racial animus or conscious prejudice against Asian Americans.”  Just last year, in November 2020, the federal appeals court in Boston upheld that decision, stating “the statistical evidence did not show that Harvard intentionally discriminated against Asian Americans.”

The Lowdown on Lowell

Despite what the courts have decided, the feeling at Lowell is that schools like Stanford and Harvard consider limiting their admissions to Asian American students in the name of diversity. One student explains, “You see a lot of freshmen wearing Stanford jerseys. By the time they’re juniors, you don’t see those any more.” That puts a glaring spotlight on Rachael whose African American mother pushes her academically and who sometimes doubts herself and her achievements in the face of sentiment that she was admitted because of her race.

The documentary is fairly upbeat, with interviews with the students, administrators and teachers. What we don’t see is the other side: How people at Stanford or Harvard assess Lowell students although one Lowell students says, “They think we’re machines.”  We don’t see the students social lives or if there are cliques and hierarchies. As Lum illustrates Lowell, it is geek and nerd heaven. Things that pegged Shea, who is White, as an outsider in other schools are what make him belong at Lowell.

Yet there must have been a rumbling of unrest that Lum hasn’t elucidated her. We don’t hear the grumblings that erupted last year at a school board meeting and change has been in the works at universities as well, making the Lowell approach dated.  UC Berkeley announced “it wanted to disregard SAT and ACT test scores in admissions decisions for some students.”  COVID-19 has forced some changes and “accelerated a process already underway at the College Board to reduce and simplify demands on students.”

Unknowingly, Lum has also frozen in time a Lowell that once was, but is no more–not only because of the pandemic, but also because of a recent ruling by the SFUSD.  According to a report by the SF-ist, “On Tuesday, the school board voted 5-2 to permanently, not temporarily, do away with Lowell’s merit-based system, following hours of discussion and public comment, as ABC7 reports.” The motivation was racism.

The urgency to take the vote now, against the desires of two commissioners who wished to delay it, was spurned in part by acts of racism earlier this month — namely an intrusion on an online class that had racist undertones, which many said was likely the act of Lowell students.

“Twenty minutes before this meeting started, we discovered more acts of racism towards Black students at Lowell,” said Megan Law, a Lowell student and vice president of the Student Advisory Council, during the school board’s February 2 meeting, adding to the issue’s urgency.

There were deeper, darker issues about race and racism at Lowell, something beyond grades and off-hand comments that this documentary, “Try Harder,” missed. As SF student board member Kathya Correa Almanza noted during the school board debate, “This school is lacking in diversity. You cannot determine or make a decision on who is highly motivated until you look into their everyday life. Diversity is not a bad thing.”

“Try Harder!” made its world premiere at the Sundance Film Festival on 30 January 2021.