Bill & Ted Face the Music: A Reminder to Be Excellent

“Bill & Ted Face the Music” is an amiable comedy, that might not be excellent, but comes at a good time to remind us that “the best time to be is now” and we should be “excellent to each other.”

William “Bill” S. Preston Esquire (Alex Winter) and Theodore “Ted” Logan (Keanu Reeves) should surely have a statues in San Dimas. San Dimas is a real city in the San Gabriel Valley of Los Angeles County. It is, some what fittingly, named after Saint Dismas, the Penitent Thief–one of two nameless thieves from the account of the crucifixion of Jesus Christ. In the Bill and Ted series, San Dimas becomes the center of the universe and in the third installment of the series, Bill and Ted are questioning their quest and decide to steal–from themselves. 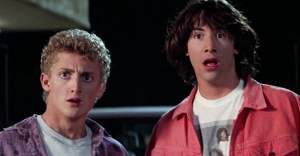 Keanu Reeves was 25 and Alex Winter was 24 when the original film “Bill & Ted’s Excellent Adventure” came out. Bill and Ted are two senior high school students on the brink of flunking out of a high school history class unless they can write an intelligible report about how three historical figures would view present-day San Dimas. If Ted flunks, his father, a police captain, will ship him off to a military academy located in Alaska.

A man from the year 2688, Rufus (George Carlin),  is sent back to 1988 to insure that Bill and Ted, the Great Ones, pass history in order that their fledgling band, Wyld Stallyns, make music and philosophy that will create a utopian society. After taking them to meet Napoleon, Rufus gives them instructions on how to operate the telephone booth-shaped time machine and leaves them to their own devices. Bill and Ted leave Napoleon with Ted’s younger brother, Deacon, and hop through history, collecting  Socrates, Billy the Kid, Sigmund Freud, Genghis Khan, Joan of Arc, Abraham Lincoln and Beethoven. Back in San Dimas, they leave their historic friends at the local mall so they can learn about life in San Dimas. They then locate Napoleon at the local water park, Waterloop. After Ted’s father arrests the historic figures, Bill and Ted use the time machine to engineer an escape and finally make it to their history course for their presentation. Afterward, Rufus returns with two princesses from the 1400s whom Bill and Ted had met, explaining that these women would be part of the Wyld Stallyns.

The first Bill and Ted film was before “My Private Idaho” (1991), “Speed” (1994) and “The Matrix” (1999). Watching “Bill & Ted’s Excellent Adventure,” you might grow nostalgic for telephone booths and telephone directories.

Unlike “Back to the Future,”* there is no cataclysmic problem with the dudes from the past meeting their future selves.

The film starts in 2691 where the music of the Wyld Stallyns has created a utopian society with really bad fashion (that might have predicted Uggs). At the Bill & Ted University, a gym teacher, Chuck De Nomolos,  goes terrorist and creates two Bill and Ted androids and sends them back to the 20th century to prevent the Wyld Stallyns from winning the San Dimas Battle of the Bands. Rufus attempts to stop De Nomolos but is lost in time.

The Wyld Stallyns are given the last time slot for the Battle of the Bands by organizer Ms. Wardroe. Bill and Ted propose to their 15th-century princess Joanna and Elizabeth, but soon after and unbeknownst to the women, Bill and Ted are kidnapped and killed by their evil robot doubles at Vasquez Rocks. Bill and Ted meet Death and after a few escapades, accept his challenge of a duel. If they win, they escape Death. They choose modern games (Battleship, Clue, Electric Football and Twister) and win despite Death (William Sadler) constantly changing the agreement. Death helps them locate alien geniuses in Heaven who create good robot versions of Bill and Ted. On stage at the Battle of the Bands, Bill and Ted battle their evil android doubles with good robots made from parts bought at a Builder’s Emporium and save their fiancées. Another version of Bill and Ted join them with little babies Bill and Ted post0honeymoon. They win the battle with Death playing bass, but after going on to stardom, they have a fall from grace and Death tries to go solo.

For those who were born in the 1990s, Builder’s Emporium was a home improvement chain like Home Depot or Lowes that closed in 1993. The chain started in the San Fernando Valley and was eventually headquartered in Irvine, Ca. At the time it closed, it had stores in California, Nevada, New Mexico, Arizona and Texas.

Orchard Supply Hardware which was based in San Jose is also seen. That chain was founded in 1931 and closed in 2018. 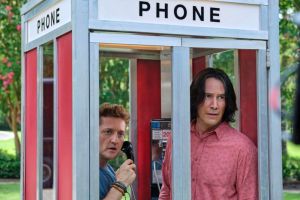 The third installment of the Bill and Ted series was in the works since 2010 so you’ll have to forgive some of the possible age problems. In 25 years, Bill and Ted have continued promoting their rock band Wyld Stallyns, but they have yet to create the song that will unite the world. They thought they had with their only number one song, “Those Who Rock” out of San Dimas Records. After all, they had played at the Grand Canyon, but they acrimoniously broke up with the Grim Reaper (William Sadler) and things went downhill from there. Their last gig was at the Elks Lodge in Barstow for 40 people, out of whom most were not there for the music.

Because Bill and Ted haven’t completed their masterpiece, time is beginning folding in on itself which results in Jesus at the Last Supper disappearing and being replaced by Kid Cudi. Babe Ruth (Reece Loustalot) disappears from a baseball field and ends up crossing the Delaware River in place of George Washington (William E. Harris).

Missy, the girl who as a senior, freshmen high school students Bill and Ted both asked to the prom, but in the first film was married to Bill’s father and by the second film was married to Ted’s father, is now marrying Ted’s younger brother, Deacon (now played by Beck Bennett).  Bill and Ted try to play their newest song, but are cut short by Ted’s father, Chief Logan (Hal Landon Jr.) who literally pulls the plug and rails at them for irresponsibly raising their kids, daughters Billie (Brigette Lundy-Paine) and Thea (Samara Weaving), who still live at home, but have an incredible knowledge of music.

After wedding fiasco, the princesses Elizabeth (Erinn Hayes) and Joanna (Jayma Mays) sign themselves up for couple therapy (Jillian Bell as Dr. Taylor Wood). Yet the two couples end up at the same session and the therapist doesn’t quite understand the situation about princesses and time travel.

Just as Bill and Ted are about to give up, Rufus’ daughter, Kelly (Kristen Schaal), shows up in a more modern time machine and takes them to see her mother, the Great Leader.  She is disappointed that the dudes haven’t produced as promised and gives them an array of instruments and a deadline: They have 77 minutes and 25 seconds to perform that song at MP 46. The dudes decide to go to the future and find their future selves and steal the song because, as Bill puts it: “How is that stealing if we’re stealing from ourselves, dude?”

The Great Leader (Holland Taylor) has many doubts and her interpretation of the prediction is that the death of Bill and Ted will save the universe. She had a robot designed, Dennis Caleb McCoy (Anthony Carrigan), which she sends to kill Bill and Ted.

Kelly goes back to the present to warn Bill and Ted, but they aren’t there. So while Kelly stays and waits (and while Bill and Ted are chasing their future selves to steal the song), Billie and Thea take the mod egg pod and decide to build up a band for their dads, starting with Jimi Hendrix (DazMann Still) and then going on to Louis Armstrong (Jeremiah Craft), Mozart (Daniel Dorr), Ling Lun (Sharon Gee), and a prehistoric drummer Grom (Patty Anne Miller).

Dennis does end up killing Billie, Thea and their band plus Kelly (“Oops. I’m so sorry Great Leader”) but that sends Bill and Ted to their rescue, meaning they must meet with Death.

What we learn is that there are “infinite pasts entangled with infinite futures” and that Joanna and Elizabeth are also traveling through time trying to discover the timeline when they were going to be happiest with their men.

In the end,  Bill and Ted, Billie and Thea, Death and the famous musicians will save the day.

Under the direction of Dean Parisot and lensed by Shelly Johnson, “Face the Music” retains the 1980s, early 1990s feel. Ted and Bill’s favorite number may be the sexually suggestive 69, but they still have this sweet innocence and totally loyalty to their princesses and their own bromance. Both Reeves and Winter are convincingly dim, but dutifully honorable. There’s a lively contrast between the dim dude dialogue and Kid Cudi’s cutting edge sci-fi calculations.

Carlin’s posthumous presence comes from archival footage. His daughter has a cameo and is represented in the name of Kristen Schaal’s character.

We finally learn what an important function of the infinity button on the telephone booth time travel machine (visible in the first and second film) and that even if you’re frustrated by a traffic jam on the 210, you could make it into a musical opportunity.

During these divisive times, Bill and Ted and their bromance and even the besties of Billie and Thea are charming and a reminder that we should all be excellent to each other. With Death, there’s also a message of reconciliation and a lot of nods and knocks to the previous films and some film traditions. The end credits include videos of fans celebrating the return of Bill and Ted with a lot of air guitar shredding but also some accordion playing. Wish I had gotten in on the fun.

There’s a gentle humor that ties all the films together and the thought of a friendship that can last not only a lifetime but through a variety of time traveling temptations is oddly enchanting. Maybe there isn’t a song that will unite the world, but it’s also too bad that in 2020, we all aren’t trying to find it. Remember, “you are right where you belong.”

*Back to the Future II, Doc Brown: I foresee two possibilities. One: coming face to face with herself thirty years older would put her into shock and she’d simply pass out. Or two, the encounter could create a time paradox, the result of which could cause a chain reaction that would unravel the very fabric of the space-time continuum and destroy the entire universe! Granted, that’s worst-case scenario. The destruction might in fact be very localized, limited to merely our own galaxy.