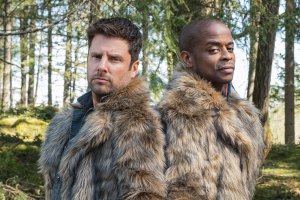 Shawn Spencer and Burton Guster and most of the gang are back together and this time, don’t expect a wedding.  In “Psych: The Movie 2” or “Lassie Come Home,” Lassie hasn’t fallen down a well and won’t be rescuing anyone from one either.  Lassie is at a posh recovery institution after suffering a stroke during surgery to repair damage after he was shot. There is a dog, but not a collie.

In “Psych: The Movie,” it is three years later. Shawn Spencer tangles with the premiere fence on the West Coast, El Proveedor (Robert LaSardo) as he searches for his grandmother’s engagement ring. The ring was stolen when Shawn meant to propose to Juliet (show finale showed the ring being stolen and Shawn and Gus driving the drivers ed car with Juliet in the back seat in pursuit of the thief). Juliet is being pursued by someone who styles himself as the Thin White Duke (Zachary Levy) who has two accomplices: Heather Rockrear (Charlotte Flair)and a Black Gentleman Ninja  (Nathan Mitchell). The Thin White Duke also has a dog, Morrissey, at his headquarters in a condemned and abandoned mental hospital, that Shawn gives to Karen Vick. Yet it isn’t really the Thin White Duke who has written the manifesto, “The Crimes of Juliet O’Hara.” That’s actually been written by Allison Cowley (Mena Suvari), who was kidnapped by Yin in “Yang 3 in 2D” during Season 5, Episode 16, but was really Yin’s assistant, something that Juliet figured out by the end of the episode. Allison is out for revenge in “Psych: The Movie,” but fails. El Proveedor ends up finding the ring for Shawn and marrying Shawn and Juliet and Gus finds a steady girlfriend, Selene (Jazmyn Simon). On their way to join Juliet and Selene at the airport to go to Jamaica for Juliet and Shawn’s honeymoon, they meet Juliet’s brother, Ewan (John Cena), who is being pursued and “Lassie Come Home” confirms Shawn, Juliet, Gus and Selene spent their honeymoon in Oslo, Norway. 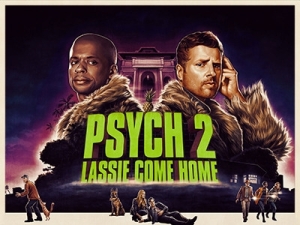 The press material gives the following set up:

Santa Barbara Police Chief Carlton Lassiter (Timothy Omundson) is ambushed on the job and left for dead. In a vintage Psych-style Hitchcockian nod, he begins to see impossible happenings around his recovery clinic. Shawn (James Roday) and Gus (Dulé Hill) return to Lassie’s side in Santa Barbara and are forced to navigate the personal, the professional, and possibly the supernatural. Separated from their new lives in San Francisco, our heroes find themselves unwelcome in their old stomping grounds as they secretly untangle a twisted case without the benefit of the police, their loved ones, or the quality sourdough bakeries of the Bay Area. What they uncover will change the course of their relationships forever. Carlton, do you remember why you’re here?

The recovery clinic, Herschel House, is upscale, and run by Dr. Herschel (Richard Schiff is listed on IMDb as Dr. Hirsch, but in the dialogue is called Herschel), and Lassiter’s nurse, Dolores (Sarah Chalke who will mention “Scrubs.”), has a special interest in Gus. Lassiter has been having hallucinations and seeing ghosts. The movie starts with him as a young boy talking with his father (Joel McHale). His father disappears.

And he’s transported to the scene of a crime, where he was shot six times. He sees a shadowy figure and his father asks him why he was there. The shadowy figure shoots him although Lassie begs for mercy because he has a family. His father appears to him throughout the movie, encouraging him. Shawn and Gus return to Santa Barbara to help Lassie who is on nine different medications.

Gus and Shawn were called by Lassie and they’ve brought Morrissey, the dog from the last movie, because he kept on biting Chief Vick’s daughter.

Because of some malware rogue app he downloaded to turn all his emojis into Jamaicans, Gus’ phone has 17 viruses resulting in some embarrassing situations. He protests Shawn’s names for him

“No more embarrassing nicknames. From now on, I do the nicknames,” Gus says.

Shawn objects, because, “We have fans; they have expectations. There’d be a huge backlash.”  Shawn’s counter offer is that he will give Gus rights of refusal. Although they get approval from Dolores to keep Morrissey with Lassie, while they were away talking with the nurse, Morrisey has jumped the window and run off into the forest.

“We simply cannot keep lying to our ladies,” Shawn tells Lassie, as he declines to be involved, but Morrisey returns with a human hand. On Lassie’s instructions, they send the hand to Woody. Then they go to the Psych office where they’ve left some of their stuff (night vision goggles and mustaches) which has become a pop-up cat restaurant for the next 19 days. As it turns out, Shawn’s father, Henry (Corbin Bernsen) has taken over the payments for the office because Shawn forgot to end his rental and has been subletting the office to every “hipster popup” and is rolling in disposable income.

As it turns out, Shawn’s wife, Juliet, has been regularly visiting Lassiter on Mondays, but today isn’t Monday. She’s been working on the case without permission from San Francisco Police Department Chief, Karen Vick (Kirsten Nelson), who is one of the final candidates for police commissioner. Someone has confessed, but Juliet doesn’t believe that guy is the one. Lassiter gives her a list of 93 errands to complete.

If you’re wondering abut the coats featured in the poster, that has to do with an ice bar and angry Viking bikers, a bearded Daryl Hannah, a man who asks to stay dead and then becomes dead and some photos taken in a restroom. Mary Lightly (Jimmi Simpson) appears, so will McNab (who by his dress and questionable hairstyle has become a detective) and there will be singing. Gus is still with Selene, but she thinks Gus is dallying with Nurse Dolores. Lassie won’t go home, home (“Of course, you’re not crazy,” his father tells him. “You’re a Lassiter.”), but there will be a happy ending.  Both Shawn and Gus will take a step forward into responsible adulthood. This is one hour and 20 minutes of fun with Shawn trying to save both Juliet and Lassie’s careers.

“Lassie Come Home” is only available on the Peacock if you get premium service and dropped 15 July 2020.