I once was the provocateur in a USC graduate journalism class when a classmate described a person in the New York subway as Asian. Just what does that mean? I had already lived for more than a year in England less than a decade before, been to Japan three times. During one stay in Japan I had a long conversation with a black Kenyan diplomat who spoke disparagingly about Asians. I had also traveled and been the seldom seen face of a forever foreigner in the US.

While in Los Angeles, I heard the silliest news description on the radio, that police were searching for an “Oriental” man in Gardena driving a Toyota. While that was decades ago, Gardena was and still is like ramen central. At one time, it was the home base for Toyota USA and Honda USA. Even now Korean and Japanese restaurants abound. The new immigrants mix with the pre-World War II immigrants and their descendants.

More recently, I wrote an essay which noted that Asian Americans could play Egyptians. That led to a twitter storm of people wondering if I was crazy. Where did I think Israel was?

Merriam-Webster defines Asian as “: of, relating to, or characteristic of the continent of Asia or its people” and “a native or inhabitant of Asia.”

If you check the Encyclopedia Britannica, Asia includes Russia. 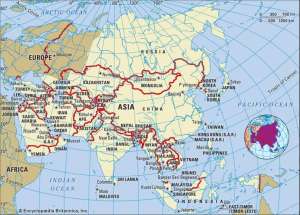 The continent of Eurasia has several countries that are considered intercontinental.  In both Asia and Europe are:

In both Asia and Africa are:

Where is the Orient?

According to Merriam-Webster, the Orient is:

sailed for the Orient

The Britannica defines Orientalism as “Western scholarly discipline of the 18th and 19th centuries that encompassed the study of the languages, literatures, religions, philosophies, histories, art, and laws of Asian societies, especially ancient ones.” Further, Britannica notes: “More recently, mainly through the work of the Palestinian American scholar Edward Said, the term has been used disparagingly to refer to the allegedly simplistic, stereotyped, and demeaning conceptions of Arab and Asian cultures generally held by Western scholars.”

Too often, when an American says “Asian” they seem to mean East Asia and Southeast Asia. Or they might also include India and Pakistan.

In the UK, when people say Asian, they likely mean India and Pakistan.

The Kenyan person explained to me that when he said “Asian,” he meant Indian. As it turns out while Indian traders established themselves in East African communities, it was actually British colonizers who brought the biggest influx of Asians when they brought about “32,000 indentured Indian laborers to East Africa” to build the Uganda railway from 1896 to 1901.

Since we are in the US, lets really look at what happens when Americans use the word “Asian” to mean East Asian and also “African American” to mean sub-Saharan African (Merriam-Webster defines African American as meaning “an American of African and especially of black African descent”). It means that people descended from North African and West Asian peoples and ethnicities are without a continent.

The term “Orient” was vague, but could include both North Africa and Asia as well as the Pacific Islands. Asia should mean the continent of Asia and not be dependent upon socio-political issues of immigration and legal acts. As the Chinese were originally singled out by the Chinese Exclusion Act and that was expanded to include other Asians, the legal issue of naturalization in the US divided Asians–those who were white enough to become a US citizen and those who were not.

Jesus Christ was born in Nazareth which is in Israel. Israel is in Western Asia. Jesus was Asian. Christianity started in Asia. The religions Islam, Judaism, Buddhism, Hinduism and Zoroastrianism originated in Asia.

There are things that we think are as American as apple pie, but apples (Malus pumila) originated in Central Asia (Malus sieversii) Peaches are native to northwest China. Oranges also originated in southern China, northeastern India and southeastern Asia. Lemons and all modern citrus trees came from Asia (Assam, northern Myanmar and western Yunnan). According to Britannica, “most rose species are native to Asia, with smaller numbers being native to North America and a few to Europe and northwest Africa.”

After 9/11, it should be clear that West Asians (and North Africans) needs to have their heritage acknowledged in the face of being forever foreigners and, as such, the target of hate incidents and hate crimes. With the pandemic of COVID-19, Asian Americans who can be mistaken for Chinese are experiencing anti-Asian hate incidents and crimes. Asian Americans should unify support each other. For that reason, I’m looking at Asian Pacific American Heritage Month in the broadest terms possible.