With Donald Trump repeatedly using the term “Chinese virus,” and people rising to defend him, I feel compelled to write a detailed explanation about why we should not use terms like Chinese Virus, Chinese Flu or even Kung Flu. Many people are referring to a specific article, but fail to see the differences.

Influenza or flu is a specific group of viruses. As Johns Hopkins explains, while both infectious respiratory illnesses and have some similar symptoms, “the two illnesses are caused by different viruses.” For this reason, calling it a Chinese Flu or even Kung Flu is clearly a mistake.

People have pointed out the terms “German measles” and “Spanish flu” have been used. Let’s remember this: When rubella was identified (1800s) and the “Spanish flu” became the 1918 influenza pandemic, racism was acceptable and written into federal and state laws.

First the German measles, also known as rubella, was named for the German physicians who wrote about it. The Spanish flu actually was not first noted in Spain. According to Live Science, “In 2014, a new theory about the origins of the virus suggested that it first emerged in China, National Geographic reported.” Other reports call Kansas the starting point  or even France. Spanish newspapers began reporting it first so the pandemic became the “Spanish Flu.”

Thus the country name attached to both German measles and Spanish Flu has nothing to do with the location of origin, but one should ask if either disease would have been so named in this decade. If size matters, and this current administration has made that point, China is 19 times the size of Spain and 27 times bigger than Germany. That’s a lot of ground to cover, but not as bad as the Asian flu which was first identified in China in 1957. Asians in the US were still not given equal treatment under the law in the 1950s.

China was the first country targeted for immigration exclusion by the US (Chinese Exclusion Act in 1882). A few decades later, the Immigration Act of 1924, or Johnson–Reed Act, including the Asian Exclusion Act and National Origins Act (Pub.L. 68–139, 43 Stat. 153, enacted May 26, 1924 predominately East Asians. US policy and legal decisions divided Asia into white passing (George Shishim), not white enough (Thind v. US, 1923). World War II and then the Immigration and Nationality Act of 1965 finally removed legal discrimination against Southern and Eastern Europeans, Asians and others. Those prejudices haven’t disappeared.

Let’s be honest. Do you think a German American or a Spanish American walking down a sidewalk in Manhattan, Chicago, Los Angeles or some Cincinnati will get targeted for hate as a result of the German measles or the Spanish Flu? How would people even be able to identify them as German or Spanish? On the other hand, any East Asian can be targeted as Chinese, as a result of people the “Chinese Virus.” We know that happens.

Wuhan is the name of a city. Zika (or Ziika) is the name of a forest in Uganda. West Nile Virus was discovered in Uganda in 1937. Uganda is a landlocked country in East Africa that is east of Kenya, north of South Sudan and West of the Democratic Republic of Congo. Ebola was first identified in 1976 in a city in South Sudan (Nzara) and in the village in Congo (Yambuku). Yambuku is near the Ebola River and the virus derives its name from the river and not the city. And we do not call either after the country (Uganda, Congo or Sudan) or the continent (Africa). For this reason, justifying using the term Chinese virus or Chinese flu is a false analogy.

Like Rocky Mountain Spotted fever, both Zika and Ebola are named for features in the landscape and not cities. Ross River Fever in Queensland, Australia was, like Ebola named for a river. Thus, these examples are also false analogies.

There are diseases named for cities like Marburg Virus Disease (1967), Lyme disease, Lassa fever (Nigeria in 1969). Marburg is a town with a current population of 76,851. Wuhan is the largest cit of Hubei with a population of over 11 million. Lyme disease was first in Old Lyme, Connecticut in 1975. It’s current population is 7,603. I cannot find a population report for Lassa, Nigeria. But Marburg Virus was also found in Frankfurt, but the decision was made to call it after the smaller town.

Valley Fever is named for the San Joaquin Valley (1930s), but the name doesn’t really specify which valley. Norovirus was named for Norwalk, Ohio, but you can’t easily get that from the name and there are more than one city named Norwalk (e.g. Norwalk, CA). There is only one city named Wuhan. And again none of these examples is analogous to calling a virus after a country.

Shall we call H1N1 "American flu"?

Of course, in the US, saying the American flu doesn’t set up specific groups to be targeted by racism and xenophobia. Calling COVID-19 the Chinese Virus does and in the United States alone the potential targets of racism are not just the approximate 3.8 million ethnic Chinese, but also the Japanese, Korean, Thai, Vietnamese and other East and South Asian ethnic groups. The New York Times has reported incidents nationwide. That racism is something that needs to be addressed and carelessly calling COVID-19 the Chinese Virus doesn’t help, especially coming from elected officials.

We’ve learned to identify another virus, the human immunodeficiency virus, by an acronym, HIV. According to the AIDS Institute, “Scientists identified a type of chimpanzee in West Africa as the source of HIV infection in humans.” Yet we do not call HIV the “African Virus” or the Congo Virus or even the Kinshasa Virus. We have learned to use the acronym HIV as well as AIDS (Acquired immunodeficiency syndrome). In 2002, we also learned to use the acronym SARS (Severe Acute Respiratory Syndrome). How hard is COVID-19?

Of course, then there was this: 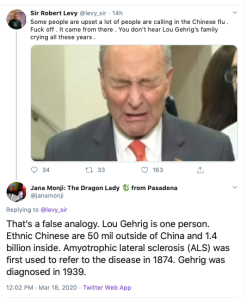 Lou Gehrig is dead. His wife is dead. They had no children. Gehrig was the only child who survived to adulthood in his family.

Lastly, for those who live in California, remember that while you might not eat bats, bats are known to carry rabies.

Asian Flu was an outbreak of H2N2 Avian influenza in 1957 that began in China.

Ebola: “The Ebola virus first appeared during two 1976 outbreaks in Africa. Ebola gets its name from the Ebola River, which is near one of the villages in the Democratic Republic of Congo where the disease first appeared.”

German measles: “The illness is called German measles because German physicians wrote the first clear description of it in 1760″

Hong Kong flu of 1968: “The 1968 pandemic was initiated by the emergence of a virus known as influenza A subtype H3N2 (also called Hong Kong flu virus).” Hong Kong is a city. China is a country. Hong Kong is now part of China.

Lassa fever (Nigeria in 1969): “Lassa fever is an animal-borne, or zoonotic, acute viral illness. It is endemic in parts of West Africa including Sierra Leone, Liberia, Guinea and Nigeria. Neighboring countries are also at risk, as the animal vector for Lassa virus, the “multimammate rat” (Mastomys natalensis) is distributed throughout the region.The illness was discovered in 1969 and is named after the town in Nigeria where the first cases occurred.”

Lyme disease: “Lyme disease was first recognized in 1975 after researchers investigated why unusually large numbers of children were being diagnosed with juvenile rheumatoid arthritis in Lyme, Connecticut, and two neighboring towns.”

Marburg Virus Disease : “Marburg virus was first recognized in 1967, when outbreaks of hemorrhagic fever occurred simultaneously in laboratories in Marburg and Frankfurt, Germany and in Belgrade, Yugoslavia (now Serbia).”

Norovirus: “The Norovirus group were first identified as the cause of a primary school outbreak of vomiting/diarrhea in Norwalk, Ohio during the early 1970’s.”

Russian flu of 1977: “Strictly speaking, there was a fourth pandemic in the 20th century, an H1N1 strain which appeared in 1977. This was a “benign” pandemic, primarily involving persons born after the 1950, because the older population had protective immunity resulting from prior experience with H1N1 strains.”

Valley Fever: “There are two distinct species of the fungus Coccidioides that cause Valley Fever: C. posadasii, the oldest species, which originated in the Sonoran Desert of southern Arizona and northern Mexico; and C. immitis, which is the species found in California’s Central Valley, as well as parts of southern California and Baja Mexico.”

West Nile: “West Nile virus was first identified in 1937 in Uganda in eastern Africa. It was first discovered in the United States in the summer of 1999 in New York”

Zika: “Zika virus was first discovered in 1947 and is named after the Zika Forest in Uganda. In 1952, the first human cases of Zika were detected and since then, outbreaks of Zika have been reported in tropical Africa, Southeast Asia, and the Pacific Islands.”