This year, 2020, is the Year of the Metal Rat/Mouse. The Japanese and Chinese don’t differentiate between mouse or rat.  For the Japanese, the year started on 1 January, but lunar year starts on 25 January 2020 and ends 11 February 2021. The Chinese recognized five elements: wood, fire, earth metal and water.

In Chinese and Japanese, mouse and rat （ 鼠）are the same thing. For the Chinese zodiac sign, the symbol 子 is used. The rat/mouse 鼠 (nezumi in Japanese and shŭ in Chinese) is considered clever and thrifty.

The rat that first pops into my head is “Ratatouille” and the first mouse is, of course, Mickey Mouse. I’ve already bought a Steamboat Willie LEGO set.

I got the following responses from fellow voices at RogerEbert.com writers: 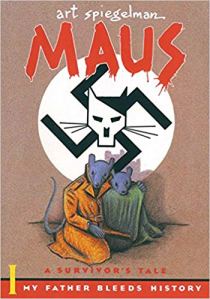 My absolute favourite mouse story is “Maus” by Art Spiegelman. Words can’t appropriately convey my feelings about this graphic novel.

And here’s something that’s somewhat related to Mickey Mouse.
In Germany, there’s a theme park called Europa-Park, where each ride riffs on a European country. I used to go there at least once a year when I lived on the army base in Germany between 1977 and 1987. This was before Disneyland Paris was built. And since Disney didn’t have that kind of presence in Europe at the time, I always thought (though I can’t be sure) that this was the reason Europa-Park chose a mouse as its mascot. His name is Ed Euromaus, and though he’s grey, I recall (though I could be wrong) that he used to have black fur. Either way, Europa-Park used a mouse to market their theme park.
In any case, below is a video of Ed Euromaus travelling to London. I’m also including a video that approximates what at least one of the Europa-Park rides was like (replace the mechanical puppets with eerie Black Forest fairy tale figures). Enjoy!
Ed Euromaus visits London

Don’t ever drink the water
https://www.youtube.com/watch?v=kkao2QlddUc

If you’re talking Mouse/Rat music, homage must be paid to Mouse/Rat, featuring Andy Dwyer (aka Johnny Karate).
Here’s their story:
Parks and Recreation – The Story of Mouse Rat (Digital Exclusive)

The best to one and all in the New Year

What are your favorite mouse/rat related music?

Steve Erickson is the MVP for music this year. I’ve added all his YouTube links below.

Fukuro no me wa ookiku temo nezumi hodo mienu: Although the owl has large eyes, he cannot see as well as a mouse meaning that bigger isn’t necessarily better.

Taizan meidoo-shite nezumi ippiki: Literally means: “A great mountain rumbles, but only a single mouse comes out.” Much ado about nothing.

Kyuuso neko wo kamu: Even a cornered mouse will bite a cat.

Toki ni aeba, nezumi mo tora to naru: When the time comes a rat/mouse becomes a tiger. The meaning is that one should be seizing opportunity at the right time.

Fukuro no naka no nezumi: A cornered rat/mouse with no means to escape

Kuni ni nusubito, ie ni nezumi: In every country robbers, in every house a mouse, meaning nowhere is perfect.

Ashita no koto wo iu to tenjoo no nezumi ga warau: If you talk about tomorrow, the rats in the rafters will laugh.

鼠年大吉 (Shǔ nián dàjí): Good fortune in the Year of the Rat.

鼠年錢粘 (Shǔ nián qián zhān): May you attract money in the Year of the Rat.

鼠年數金數不完 (Shǔ nián shù jīn shǔ bù wán): May you have uncountable riches in the Year of the Rat. The pun is in the two different shǔ–homophones with one meaning rat/mouse and the other count.

金鼠旺財，金鼠進寶 (Jīn shǔ wàng cái, jīn shǔ jìn bǎo): May you prosper in the Metal Rat year; May you enter riches. The word jīn is used to mean both metal and gold.

In the US, we love mice so much they are the beloved characters of several animated features.

You Dirty Rat (Rats of the Two-Legged Variety)

Most of us can come up with a love song from “Willard” if we’re looking for a rat-related song, but there’s also the song from “An American Tail.”

Ebert writer STEVE ERICKSON came up with the following:

“Rat Trap” by the Boomtown Rats

“Return of the Rat” by Wipers