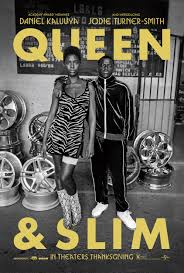 You might have heard that this is a “black” Bonnie and Clyde movie and a character does refer to the couple who end up on the run as such, but Lena Waithe’s screenplay (from a story she and James Frey created) under the sensitive direction of Melina Matsoukas in her feature film directorial debut) is not about social misfit desperadoes. Instead, “Queen & Slim” is probably one of the best bad date scenario movies, a complex look at the untidy social problem of being black while driving.

I am not black. The closest I’ve come to that problem is being with a black man when we got pulled over in a nice, predominately white neighborhood. The feeling I got from the police officer was that he was concerned for my well-being. We hadn’t been doing anything and there were no mechanical problems with his car. The officer didn’t mention anything like his driving or any type of driving infraction.  The ultra-polite attitude of my friend also told me something. While the incident was memorable to me, it wasn’t to my friend.

I’ve also read news about disastrous results of confrontations between black drivers and white officers. The problem is real but Waithe’s script doesn’t pound the issue with a sledge hammer of self-righteousness. Instead, the movie introduces us to the couple via modern day social media matchmaking: Tinder.

Slim (Daniel Kaluuya) is a social worker and Queen (Jodie Turner-Smith) is an attorney meet at a local diner. This Tinder first date is clicking all the wrong buttons. Queen with her long, high-maintenance braids is wearing white jeans and a white turtleneck. Slim is more low-key in his dark blue sweater. He has sent her a “well-crafted” missive; she took three weeks to reply. He wonders why. She wonders, “Do you really like this place or is it the only place you can afford.”

The diner is a cozy sit-down deal and he’s on a first-name basis with the waitress. When he gets sunny side up eggs instead of scrambled he doesn’t complain; he knows the waitress is doing her best and has some weighty obstacles before her. The movie actually begins with a shot of that waitress.

Queen, too, has a heart. Her client who may or may not be innocent has been put to death. She didn’t want to eat alone, but she actually prefers to live alone and eat alone. Slim prays before he eats and his gold cross is prominently displayed. Queen shows some respect but mostly impatience.

Slim’s white Honda Accord has a vanity license plate: “TRUSTGOD.” As Slim drives Queen home through the icy streets, she disses the easy listening music he has on the radio and she takes his cellphone from him. When he leans over to grab it back, he swerves slightly and that attracts the attention of a police officer. They are pulled over.

Slim is polite and accommodating. When the white officer asks to look in the trunk, Slim agrees. Queen is more confrontational, asking about a search warrant and always challenging the officer. Nothing is found, but the officer decides to arrest Slim. Queen tells him she’s reaching for her cellphone to record this incident, but the officer (Sturgill Simpson) shoots her. In the confusion, Slim gets the gun and shots the officer dead.

Queen quickly decides they should run. She disposes of their cellphones and they are on the road, without a word to their co-workers, their family or friends. They decide they’ll head to New Orleans to ask Queen’s Uncle Earl (Bokeem Woodbine). Yet Slim wonders if God didn’t mean for him to die that night and if he didn’t mess things up. “I don’t believe in luck; I believe everything is destined.”

The journey to New Orleans isn’t smooth and Queen continues to find fault with Slim, even the way he eats. They don’t have money; they can’t use credit cards. They find friends along the way during their six day run, but the screenplay is careful to include a racial mix of sympathizers while also considering how social media and a viral police dash cam video makes them outlaw heroes. There are some serious consequences for others as a result.

In the end, Queen makes some peace with her fractured family and each learns to depend upon the other. In desperate times, strange bedfellows creates a possible last-chance romance. Don’t expect a happy ending or a tidy answer to the ills of driving-while-black.  Waithe’s screenplay will draw you in, leaving a few questions unanswered until the end. Matsoukas draws out nuanced performances, making the connection between Kaluuya’s Slim and Turner-Smith’s Queen seem unlikely instead of a fated-to-be trope.  Waithe and Matsoukas ensure that we also feel Blue Lives Matter as well as Black Lives Matter.

Don’t take a date; takes friends interested in complex social issues. This isn’t “Bonnie and Clyde,” and it isn’t a good get-to-know you film (Rated R for violence, nudity and sexual situations.). Tinder users take care–this is an unlikely but cautionary tale.

“Queen & Slim” made its world premiere at AFI Fest on 14 November 2019 as the opening gala movie. The film will be released in the US on November 27.