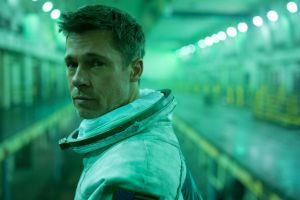 As a child, I accepted the bold missions into the unknown by men such as Robert Falcon Scott (1868-1912) and George Mallory (1886-1924) as heroic, but as an adult, I wondered about their wives and family. Mallory married Ruth Turner (1892-1942) in 1914 and they had two daughters and a son. Scott married Kathleen Bruce in 1908; they had one son, Peter Markham Scott (1909-1989), the founder of the Worldwide Fund for Nature. Taking daring risks, they left their wives to raise their children: Single parent families by misadventure under the shadow of grand heroic gestures.

“Ad Astra” explores the personal turmoil of the son of one such fictional explorer in a futuree time when people are being sent beyond the moon and even beyond Mars. Major Roy McBride (Brad Pitt) is the son of Clifford McBride (Tommy Lee Jones). We first meet him Roy as he is working on the world’s largest antenna, climbing above the earth’s atmosphere when a sudden power surge sends him plunging down with debris damaging his parachute but he survives. Yet during this frightening episode, Roy’s blood pressure and heart rate remain oddly constant and calm.

Power surges are causing catastrophic fires and plane crashes and the cause seems to be emanating from a source near Neptune, possibly related to a deep space endeavor–The Lima Project which was led by Roy’s father, Clifford. The objective was to contact other forms of intelligent life. Sixteen years ago, that ship disappeared and the official story was the Clifford and all aboard were dead.

Although Clifford had been a distant parent, both physically and emotionally, Roy had idolized him. Roy last saw him when he was 29 and Clifford’s death left a terrible void that seems to swallow all emotions but also provided Roy with his incredible tolerance for risk. Now, the US government reveals that Clifford is not dead, but alive at the edge of the solar system. Because they believe that Clifford may be connected to the power surges, they tap Roy to go on a mission to Mars to contact Clifford.

Accompanied by one of his father’s old friends, Col. Pruitt (Donald Sutherland), Roy travels from Earth to the Moon on a commercial shuttle. This isn’t Star Trek or Star Wars. Space travel isn’t done with warp drive. On the moon, it’s the Wild West with outposts from various countries squabbling over the limited resources and, in between, pirates looking to steal anything of value. The US contingent is attacked on their way to a remote base where the spacecraft Cepheus is located.

In Greek mythology, Cepheus was the husband of Cassiopeia and the father of Andromeda. According to myth, Cassiopeia boasted the her daughter Andromeda was more beautiful than the sea nymphs, the Nereids. Angered, the sea god Poseidon sent a flood and a sea monster, Cetus. An oracle revealed that Andromeda must be sacrificed to Cetus. Andromeda was saved by Perseus who exposed Cetus to the head of Medusa. Perseus married Andromeda and left his first-born son, Perses, with Cepheus. Perses is credited as the father of the Perseides and the Persians. Cepheus also is a constellation (as are Andromeda and Cassiopeia).

In “Ad Astra,” not only is their military escort killed, but Pruitt is injured and cannot continue on. He gives Roy a classified video from SpaceCom that reveals top secrets about The Lima Project. Disillusioned, half of the crew wanted to return to earth. In the ensuing mutiny, people are executed and the power mechanism of the project has been releasing electromagnetic pulses that threaten the stability of Earth and the entire solar system. Roy’s mission is to make contact with his father so that the government can locate him and secretly destroy The Lima Project, killing his father in the process.

On the Cepheus, Roy is the passenger with a crew of four bound for Mars. When the captain (Donnie Kershawarz) receives a distress signal from a Norwegian biomedical animal research ship, space protocol requires the captain to respond, despite the secrecy of their mission. On the ship, disaster strikes and only Roy returns alive. The unnerved co-pilot is almost unable to land on Mars, but Roy prevents disaster again. On Mars, Roy reads a transcript for the transmissions, but only when he goes off-script contact is made. Roy’s participating in the mission ends, but Roy is driven to meet his father. Another Lima Project orphan, Helen, helps Roy attempt to board the Cepheus before it takes off for Neptune, a journey that is 79 days, 4 hours and 8 minutes.

Some of the footage will remind you of the documentary “Apollo 11” or the recent “First Man.”  Cinematographer Hoyte van Hoytema also worked on another intellectual exploration of space, the 2014 “Interstellar.” Caltech theoretical physicist Kip Thorne was an executive producer and consultant on the movie which also focused on the survival of humanity by searching for new inhabitable planets through a wormhole near Saturn.

In his pursuit of reality, director and writer (with Ethan Gross) James Gray consulted with retired astronaut Garrett Reisman (two space shuttle missions to the International Space Station in 2008 and 2010), experts at Lockheed Martin and NASA aerospace engineer Robert Yowell as well as hosting a dinner with astronauts and experts from NASA, JPL and SpaceX and other firms.

The result is the future that could be, imagined with both the beauty and horror of space travel. Gray considers that exploration might be a means of escape. I often wondered if Scott and Mallory weren’t escaping their world, the comforts and social and emotional requirements of home. While Gray favors space exploration he also feels, “The Earth and the human connection are worth preserving at all costs.”

The film “Ad Astra” takes full advantage of Pitt’s attractive visage, but he’s rarely smiling. He’s tired with under eye bags seem like the product of days of restlessness. The lighting in space is never flattering and when we see Jones’ Clifford, the effect makes him seem like a man more dead than alive. You’ve probably seen zombies that look more lively.

The title comes from the Latin phrase, “Per aspera ad astra,” which means “through hardship to the stars.” It appears both in “Star Trek: The Next Generation” and at the end of the 2015 movie, “The Martian.” It is also on the plaque honoring the astronauts (Command Pilot Virgil I. “Gus” Grissom, Senior Pilot Ed White, and Pilot Roger B. Chaffee) who died in a cabin fire during a rehearsal test (21 February 1967). The tribute exhibit at the Kennedy Space Center Visitor Complex marking the 50th anniversary of their was entitled, “Ad Astra Per Aspera – A Rough Road Leads to the Stars.”

As we turn out sights to the moon before our great leap to Mars, we need to remember that sacrifices have been made and sacrifices will be made. On the Moon and Mars, the air we breathe will be imported or artificially created. Life is precarious. On Mar and the Moon, there’s a sense of claustrophobia–one’s always contained. And sometimes the families left behind will be the collateral damage of these explorations.