My dog and I know something about racing in the rain. Running on the wet grass during a lightning-and-thunder wet weekend in Utah years ago at the beginning of our competitive agility career, I slipped and fell and my dog came to comfort me. Later, we would be the only ones in our class to qualify because the others skidded off of the table in the middle of the standard course. 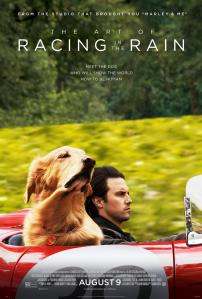 On rain-slick grass, you need the right shoes as a human and both dog and human need the right approach. We learned a lot from that weekend even though for the most part we’ve competed on dry dirt or under cover.

Just prior to attending the press screening, I was not worried about rain. With the air conditioning broken, I worried about my oldest dog whose breathing becomes rough and irregular on hot summer days. He’s ten and a half and that’s a pretty grand age for a larger dog. When we first meet the dog Enzo (voiced by Kevin Costner) in “The Art of Racing in the Rain,” he is old and incontinent. Costner’s age-grizzled voice fit him well enough. Enzo’s owner doesn’t get mad–we only see Denny (Milo Ventimiglia) get inappropriately mad at Enzo once in the movie–and we hear and see the sadness of a man who’s realized his best friend is coming to his end of days. At that point, tears were already forming and my heart hurt. Anyone who has been there knows that feeling and director Simon Curtis deftly controls the mood, leaving us enough time to reflect before swiftly moving back to Enzo’s first day with Denny.

Denny buys Enzo on a whim after seeing a sign along the road about puppies for sale. Who can resist a pen full of Golden Retriever puppies? One suspects the breeders aren’t particularly reputable. No matter which pup the prospective buyer picks, the future Enzo advises, the couple will always claim it was the “pick of the litter” and they intended to keep that one. Oblivious to the emotional gamesmanship, Denny chooses Enzo and takes him to the track. Enzo is named after Enzo Anselmo Guiseppe Maria Ferrari (1898-1988), an Italian motor racing driver who founded the Scuderia Ferrari Grand Prix Motor Racing Team. Later, he would found the Italian luxury car that bears his name.

Denny aspires to become a Formula One Race Car driver and through Enzo’s observations, we learn a bit about the racing.  “The best drivers don’t focus on the future or the past.” Like dogs, “The best drivers only focus on the present,” we learn. Early on, Denny occupies Enzo by watching television and Enzo also learns about humans and life through it including the idea that dogs who are prepared will be reincarnated in their next lives as a human from a Mongolian movie “State of Dogs.”  Throughout, Enzo looks at the comparative advantages and disadvantages of being a dog versus being a human.

Denny and Enzo’s bachelor life gives way to romance and while at first Enzo isn’t taken by Eve (a luminescent Amanda Seyfried) or her parents, the “twins” (Kathy Baker as Trish and Martin Donovan as Maxwell), he is won over by Denny and Eve’s daughter, Zoe (Ryan Kiera Armstrong). His job becomes to protect Zoe, but he also knows that something that others do not until much later–that Eve is dying. Unable to communicate the brain cancer that he can smell, he is able to help her when she faints in a forest.

By this time, Eve had committed an almost unpardonable act of neglect–leaving Enzo alone, locked in the house without food for days. Eve had become nauseous and taken her daughter to her parents house, completely forgetting the forgiving Enzo who can only wait for Denny to return. Eve and her parents didn’t stop to think of poor Enzo who could only wait. While one might forgive Eve (she has a brain tumor after all), it is harder to forgive her parents. It is harder yet to figure out just where Denny’s parents and relatives are, but that’s another story.

This is one of two times, when Enzo suffers neglect. The second seems like lazy writing or an artificial attempt to amplify the emotions, but I haven’t read the eponymous book so I’m not sure who to blame–author Garth Stein or screenwriter Mark Bomback. With Eve’s fatal illness  and the aging of Enzo, the tragedy of life is already fully rendered.

At this point Ventimiglia has built a solid reputation as everyone’s favorite dad. In “This Is Us,” he might have failed at times to be the best husband (e.g. alcohol related problems) or best brother (disconnected with his alcoholic, drug-addicted brother), but he is the reassuring dad who always had time for his kids, even if he wasn’t rich. As Denny, Ventimiglia is still a good dad, but his profession is precarious, requiring a lot of traveling. One of his talents is that he knows how to race in the rain. Hence, the title. Yet race car driving isn’t presented as particularly dangerous. We don’t see or hear about fatalities. Only Eve’s father expresses doubt and, as portrayed by Donovan, he’s a grim grandfather and as close as we’ll come to a bad guy.

“The Art of Racing in the Rain” is about using the unpredictables, like rain, to your advantage. That means real rain for Denny and for Enzo, Eve. There is heartbreak in the eventual loss of Eve, and that’s amplified when the “twins” fight for custody of Zoe, with Maxwell playing dirty. All will end well because Enzo will force Denny to go for the win.

Dog lovers, this will break your heart in a good way and remind you of your loved ones at rainbow bridge and of the short time we have to spend with the dogs we have in our lives now.