‘Ain’t Too Proud’: The Temptations and Temptation, a Musical History ✮✮✮✮

Opening night for “Ain’t Too Proud” was music and Motown memories. The audience included the man who made it happen, Berry Gordy (88); one of the original Supremes, Mary Wilson (74), and the man of the musical: baritone Big Daddy Otis Williams (76).

The full name of the musical is “Ain’t Too Proud: The Life and Times of The Temptations” and most of the action is set in front of or in performance spaces in a variety of places. Williams is the last surviving member of the original vocal group and owns the rights to the name. The musical follows his move to Detroit and low level trouble with the law before he began singing. Idolizing the Harlem doo-wop group, The Cadillacs (1953-1962), he also forms a group out of two competing groups (Otis Williams & the Distants and the twosome known as the Primes), but the road to being The Temptations is rocky until they meet Berry Gordy (Jahi Kearse). Gordy brings in Smokey Robinson (Christian Thompson).

The five men who would be the Classic Five Temptations were Otis Williams (Derrick Baskin), Melvin Franklin (Jawan M. Jackson), Paul Williams (James Harkness), Eddie Kendricks (Jeremy Pope) and David Ruffin (Ephraim Sykes). The fantastic fivesome had help from Miracles bandman Bobby Rogers and Smokey Robinson who wrote “The Way You Do the Things You Do” for the Classic Five with Kendricks singing lead. It was their first top 20 hit.

As with many groups, the temptations of ego and drugs plague The Temptations and, in particular, the charismatic David Ruffin. Addicted to cocaine, Ruffin began missing rehearsals and then performances. In 1967, when the Supremes became Diana Ross and the Supremes, Ruffin wanted similar recognition. He began to question the financial arrangements the group had with Gordy, but the final nail on his Temptation membership coffin was missing a performance to attend the performance of his girlfriend.

One of the funniest moments is when Dennis Edwards (Saint Aubyn), Ruffin’s replacement, is performing in concert only to have Ruffin show up and hop on stage to also perform. These aren’t dueling divos with claws out, but professional musicians attempting to stay cool and go with the flow. This actually happened more than once.

Other amusing moments are when Gordy vetoes a song (“War” for Edwin Starr) that goes on to be a success for another group and when The Temptations are forced to sing a song that becomes a hug hit (“Papa Was a Rolling Stone”)  and wins Grammy Awards. The song comes back to haunt Otis Williams but with The Temptations, Williams was indeed, “the glue that holds everything together.”Eventually, there would be 24 different male singers who would be members of The Temptations. Some of the departures bitter and others, sad.

This is a joyous dancing, singing, group that weathered the racism of the times, ventured into psychedelic music to stay relevant and survived the every changing line-up. Williams has said, “The Temptations still stand today, not in spite of those who left us, but because of them.”  This is, of course, Williams’ version of The Temptations, but it is a wonderful version that does point out some of his own mistakes.  We’ve all made our owns, but let them go to enjoy the music and the moves of this legendary Motown group. 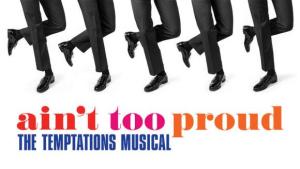 If you’ve never seen or heard of The Temptations, here’s a video of the Classic Five performing to the song that gives this musical its name:

“Ain’t Too Proud: The Life and Times of The Temptations” continues at the Ahmanson until 30 September 2018.