‘Monsters University’: Have you applied yet?

I’ve been thinking of going back to school and I think I’ve found where I want to go: Pixar’s “Monsters University.” I may not be big and furry. I have two eyeballs instead of one or a dozen. If you enjoyed the 2001 “Monsters, Inc.” then this is long overdue but oh-so worth the wait.

Directed by Pete Docter, “Monsters, Inc.” was about the parallel world of monsters who power their city by harnessing the screams of children. Expert monster scarers go through magic doors at the company Monsters, Inc. and into the bedrooms of sleeping children, but they don’t want to touch human kids for fear of contamination. One day, a child enters Monstropolis and the top scarer, Sulley (John Goodman) and his best bud Mike (Billy Crystal) scramble to get her back to where she belongs. The movie was about friendship and how laughter and love can triumph over fear.

This movie, “Monsters University,” has different writers (Daniel Gerson, Robert L. Baird and Dan Scanlon) and a different director, Scanlon. This movie focuses on Mike who since a childhood field trip to Monsters, Inc., has wanted to be a scarer.  Unfortunately, Mike isn’t particularly scary, though he does have the dedication to study all the scare theory. Mike meets another college freshman that he instantly dislikes, Sulley. If you’ve been to college, you know the type. Sulley is a legacy who wants to coast by on his family’s reputation.

Mike, Mike’s roommate Randall (Steve Buscemi) and Sulley are all enrolled in the School of Scaring which is much more fun than the School of Engineering where geeks design doors and canisters. I myself would want to be in the School of Liberal Arts and Monstrosities, but I digress.

Mike, Sulley and Randall all want to be cool and be accepted into the cool frats (although I’m not sure cool and frat should go together, ever at least in the human world). That frat would be Roar Omega Roar with president Johnny Worthington (Nathan Fillion). Of course, due to various obstacles, only Randall ends up in ROR while Sulley and Mike find themselves in the outcast frat Oozma Kappa.

Mike and Sulley have been expelled from the School of Scare and have wagered their future with Dean Hardscrabble (Helen Mirren) on winning the university’s annual Scare Games. Here the movie goes into a “Bad News Bears” sort of shape-up-the-misfits into a team mode. Oozma Kappa lives in a house of one of the members, Scott “Squishy” Squibbles (Peter Sohn) whose mother is the dorm mom (Julia Sweeney). The founder and president is mature student Don Carlton. Other members are the free-spirit Art (Charlie Day) and siblings who share a body–Terri and Terry Perry (Sean Hayes as Terri and Dave Foley as Terry). Not sure of the Perrys count as one or two members.

While you might be tempted to think of Johnny or Hardscrabble as the bad guys, no one here is really evil. Randall does come close, but now we see motivation.

The whole school atmosphere is richly realized with monsters you’ll recognized, maybe even sitting right next to you in their human form. The movie doesn’t take the easy or predictable route to a happy ending. There’s a sense of morality and ethics that isn’t cloying. A clever montage shows how Sulley and Mike get to “Monsters, Inc.” and that story line. Be patient and wait through the ending credits for a little extra present.

Then, if you haven’t done so already, check out the Monsters University website and maybe, if your local theater has it, you can make yourself a student I.D. 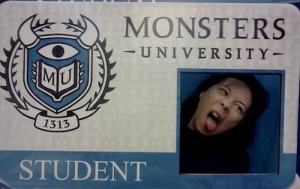 Maybe I’m not a monster in the Lady Gaga sense, but I’m proud to be a deceptively  sweet-looking monster in the dragon lady tradition. I’m hoping for more stories will come out of Monsters University or that a Monsters U will spring up somewhere. I’ll have my application ready.