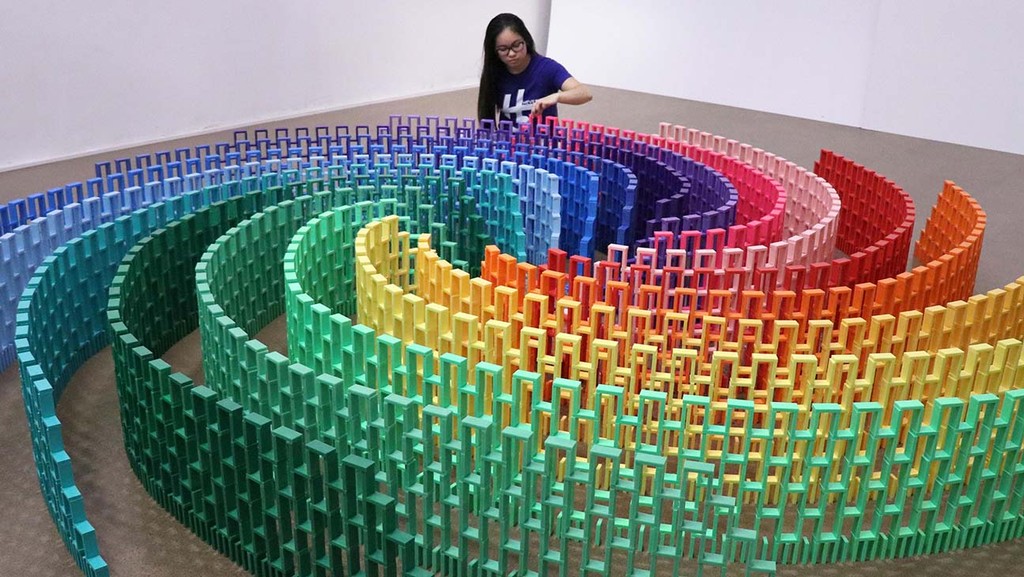 A young toddler is adopted into a well-to-do White family that already has two biological kids. Although she had some separation anxiety, she also gains an obsession: dominos. At ten, she posted her first YouTube video under the moniker, Hevesh5. For a while, she hid her identity, but she’s now the world knows she’s Lily Hevesh, professional domino builder and a domino entrepreneur and the topic of the documentary “Lily Topples the World.”

As a child, Lily’s adoptive mother, Cathy (Hevesh2), lived near her grandmother who was constantly fostering children. After she and her husband Mark has two kids, Matthew (Hevesh3) and Alissa (Hevesh4), Cathy wanted to adopt a child. That child, Lily, was a year old when she joined the family. Lily is now 22 (Matthew is a professional musician and music educator; Alissa is in food science and food security and living in Florida. Linkedin lists her as a farmer at Gamble Creek Farm.) and a domino entrepreneur.

Lily isn’t particularly careful with her appearance. She is the kind of geek genius that has a pragmatic approach to what she wears, instead of stepping into the glamorous girl geek genius image engineered by men in a cinematic tradition like the fabulously popular “Queen’s Gambit.” Her voice has a slightly irritating flatness, but her lack of pretense and her unassuming but utterly sincere enthusiasm is what sells this documentary. Lily was so modest that in college, her roommate and friends didn’t initially realize who the celebrity amongst them was. There’s an almost awkward sweetness when Lily meets her fans at a YouTube pre-pandemic convention and it demonstrates how beautiful social media can be.

Director Jeremy Workman takes us into Lily’s world, mixing Lily’s YouTube videos with their own camera work and shows how Lily’s and her father’s camera technique have helped her become YouTube famous. Workman also brings in her competitors, colleagues and co-workers. To make the best builds, Lily works with other domino builders. There’s a sense of both camaraderie and friendly competition–they can push each other to be better. Workman also shows the kind of disaster you think might happen, both fake ones and real ones.

Under Lily’s color-conscious exacting eye, domino toppling becomes not just a cool idea and an intricate exercise, but art. With her cohorts, these collaborations become great advertising, celebrity celebrations and art happenings. On YouTube, you can watch these things over and over for its beauty. It’s experiential art.

During this pandemic where isolation isn’t an option, “Lily Topples the World,” is a great example of what a fortress of solitude can produce. Lily’s solitude was often self-imposed, and through YouTube, she found an audience, friends and colleagues. Instead of being an outsider, she became the ultimate insider, a geek who not only found her tribe but became its leaders. Obsession isn’t always bad and the time to discover what you can do by yourself can lead to an amazing friendship if not a future that seems unlimited.

“Lily Topples the World” was produced by Kelly Marie Tran and made its world premiere at SXSW Online 2021, winning the Documentary Feature Film Award.