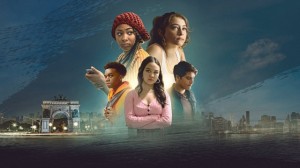 If you haven’t already canceled your Netflix subscription over “Cuties,” then “Grand Army” might give you another reason because this is about high school teens dealing with sex, race and economics in Brooklyn (although it was filmed in Toronto, Canada).

“Cuties” director and costumer might have made the mistake of making pre-teens and young teens seem too slick and near glamorous as they strutted their sexual simulation dancing, but that isn’t the atmosphere in “Grand Army” at Grand Army High School. The first few minutes of Episode 1 (“Brooklyn, 2020”) is meant to grab your attention with carnal details, and make neatniks’ skin crawl. In the girls gym, things aren’t shiny, new and clean. The place is old, run-down and dirty, with used paper towels and tissues strewn about. Graffiti on the wall asks: “Ladies, what’s better a good fuck or a good shit?”

A girl named Joey Del Marco (Odessa A’Zion) is comforting her best girlfriend who after a sexual rendezvous with local lothario, George (Anthony Ippolito), has a condom left up in her vaginal canal. Joey is retrieving it in a bathroom stall.  And then there’s a bomb threat.  I’m so glad I got through high school without ever having this happen to me, but I also got through high school without a nearby bomb threat. Times have changed.

I’d like to think that neither of these things really happen, however, we know that shootings happen at high schools. As for the condom retrieval expedition, that might also be true. “Grand Army” is based on Katie Cappiello’s “Slut: The Play”; the 2013 play is inspired by real-life experiences of teenagers from New York, New Jersey, Connecticut and Pennsylvania. I have not seen the play so all I know about it is based on a Wikipedia entry.

Joey is a regular pal-gal and is the fourth wheel in a three-man crew consisting of aforementioned George, Luke (Brian Altemus) and Joey’s sort-of boyfriend Tim Delaney (Thelonius Serrell-Freed). Tim is a fraternal twin to Anna.

Once Joey successfully retrieves the condom, she throws it in front of Leila Kwan Zimmer (Amalia Yoo). It’s just a “joke,” but Leila is already the source of much negative attention from the “real” Chinese girls in her classes. We later hear the Chinese girls make snide remarks in Chinese (subtitled in English) in history class where Leila, a freshman, will be writing about the Jews in China. Her adoptive parents are Jewish, but she is Chinese without a cultural reference.  Leila’s true feelings of frustration and anger are represented by animated sequences that aren’t pretty and often involved zombies and the ripping of flesh.

Also in the girls gym during the condom retrieval expedition is Dominique “Dom” Pierre (Odley Jean), a girl who earns extra cash by doing hair for other Black girls and women.  Dom, like Joey, is a junior and she’s interested in a certain boy whom she hopes will ask her to the prom.

Two boys at Grand Army have opportunities this season that could change their lives. Sophomore Jayson Jackson (Maliq Johnson) is a saxophone player who is second to his best friend, Owen. Siddhartha “Sid” Pakam (Amir Bageria) is a senior hoping to get into Harvard, but he needs to write his essay.  Sid, who finds himself caught between the expectations of his Asian Indian parents and his own desires, also faces the prejudice of being the face of a “terrorist.” He’s South Asian American and not West Asian American.  That doesn’t matter.

If you know the geography of Brooklyn, there’s how things shake out. Joey is from Stuyvesant Town. Dom from East New York. Sid from Jackson Heights. Jayson from Spanish Harlem. Leila from Upper West Side.

Season 1 deals with three major crises for the kids:

There will also be two crises for the administration, but the focus is not on how the adults are dealing with the kids.

From the beginning, each episode shows cryptic words being typed on a computer screen; it’s a mystery that is revealed in the last episode.

I’m not a fan of the f-bomb and it is frequently used here. Watching this should spark discussions about rape culture, school dress codes, ethnicity and racism, but “Grand Army” hasn’t yet offered up any answers. While it was nice to see diversity represented in a manner that went beyond Black and White, including both a South Asian American teen (Sid) and an East Asian American (Leila), it would have been more rounded if we knew why the Chinese-speaking girls are so nasty to Leila and see these girls as more than just the mean girls Asian style.

Cappiello has kept her hand in her creation. She wrote the first four and the last episodes. She co-wrote the fifth (with Hilary Beattis) and sixth (with Randy McKinnon). “Grand Army” is still clearly her vision.

Watching this might scare parents, but parents need to be frank because teenage sex happens. Decades ago when I was in high school, my mother knew all the gossip because she was the counselors’ secretary. There was a girl entering high school who was already a mother. My mom was too paranoid to deal with it (and to be fair, she had already dealt with my father’s terminal illness), but then and now when your kids are in junior high, it is not too early to talk about sex and pregnancy and to do a self-esteem wellness check. In high school, monitoring your kids is not a bad thing.

In “Grand Army, teens are roaming around the city and going to unchaperoned house parties with under-aged drinking and drugs. The casual hook-up culture of today is shown in this series by a girl giving a blow job because of a lollipop valentine surprise. For something worth less than $1, she licks his dick. I wish there weren’t kids who felt this way. I’ll trust Cappiello that this isn’t so far from the truth.

All of this grungy gritty high school culture may also seem like a surreal world, given the current state of education, with kids learning via Zoom and parents sometimes being weirdly and accidentally monitored as they forget that Zoom classes mean students and teachers can see inside their homes. Kids, and even parents, may miss the days when kids could wander the streets freely and had to leave the house to get to school. Remember people getting together to sing or play instruments? Remember social events for dressing up and dancing. It all seems like a parallel universe that we left behind. What a difference a few months make.

A bombing blocks away sends Grand Army High School into lockdown, building pressure that spills over at the “party of the century” that night. (52 minutes)

Exposed and suspicious after his essay leaks, Sid looks for his betrayer. Dom lets her vulnerability show–and whine–at her internship interview. (50 minutes)

Joey copes with a difficult setback in her case. Choking under pressure, Dom breaks trust with a teacher–and John. The real Sid stands up. (50 minutes)