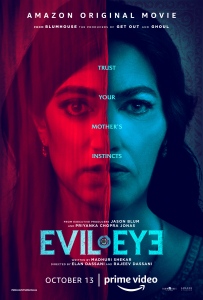 “Evil Eye” is one of the disquieting stories out of Blumhouse Productions for your October chills and draws upon writer Madhuri Shekar’s own cultural traditions. This twisted tale focuses on the connection between a mother, Usha Kharti (Sarita Choudhury), and her daughter Pallavi (Sunita Mani).

Usha has returned to India while her 29-year-old daughter remains in the United States. Like any mother anywhere, Usha has long been concerned about her daughter finding the right man.  Yet issues from Usha’s past haunt her and she’s worried that Pallavi will fall in with the wrong man. When Pallavi meets the man of her dreams–tall, dark, handsome, rich and Asian Indian, her superstitious mother convinces herself that the man she has never met in person, Sandeep (Omar Maskati), is the reincarnation of a man from her past. A man who died three decades ago.

Writer Shekar has included a few red flags that might be red herrings. This prince charming is also guy who moves too fast and wants to pay for everything. That’s classic obsessive behavior, but also out of the universal fairy tale of a soul mate sweeping you off your feet and into better digs.

Pallavi could be considered a city Cinderella with the school administration that she works for the Evil Stepmother who keeps her from fulfilling herself, especially since she’s always serving the needs of her students–stand-ins for the demanding stepsisters. What she really wants to do is write a novel and Sandeep may be the guy who gives her that opportunity.

Yet Pallavi is not fatherless. Usha settled down with a reliable man, Krishnan (Bernard White). Krishnan is the voice of reason: He doesn’t believe in horoscopes or the evil eye. Does father know best?

Visually, we see trouble in paradise.  The set designers and cinematographer have created parallel worlds in Usha’s Indian home and Pallavi’s American world. Pallavi’s vibrant world as represented by her funky apartment slowly gives way to one drained of color, pallid in comparison. I was curious about the names of the main characters, particularly because the father is named Krishnan. Krishnan means “black” or “dark,” but is related to Krishna, a major deity in Hinduism. Usha is a Hindi name meaning “dawn.” Pallavi means “new leaves.” Sandeep means a lighted lamp or one who is enlightened. Of course, who would give their son or a character of questionable motives a name that telegraphed evil?

The directors Elan and Rajeev Dassani don’t overplay their hand. We’re kept wondering if Sandeep is just a spoiled rich boyfriend or something more until the very end. The horoscope scene might seem extraneous, but it forces one to process another possibility: The mother might be the person who keeps two perfectly matched people apart.

When I interviewed the Choudhury, Mani, Shekar and the Dassani brothers, I found that the evil eye, karma and reincarnation are concerns that permeate throughout their lives. It is part of Indian culture. For some like Choudhury whose father was a scientist, it might only come up at the house of relatives, but it is mentioned. The evil eye is there and not there. Present and not present. Important and yet incidental. The evil eye and reincarnation are part of everyday life instead of something for the chosen few. Reincarnation is then not an operatic device of the imperialistic adventure of lost civilizations as in the recurring love triangle of H. Rider Haggard’s 1887 novel, “She: A History of Adventure” which also became the 1965 MGM (with the British Warner-Pathe Distributors for Hammer Film Productions) horror flick, “She.”

Weirdly, during the Monday screening event, someone seems slightly offended by the film, wondering if the film supported Black Lives Matter. I don’t think that matters at all and in some places most of the cast, the directors and writer would be considered Black as Little Black Sambo.

“Evil Eye” invites viewers into Asian Indian culture and yet challenges the fairy tales of East and West and notions of soul mates. In Hindi and English.  Currently “Evil Eye” is streaming on Amazon Prime Video.