As a Sherlock Holmes fan and a woman, I’ve been disappointed in the recent renditions of Sherlock Holmes. Modern writers just can’t seem to get over that two women (“A Scandal in Bohemia” and “The Adventure of the Yellow Face”), most prominently Irene Adler got the better of Holmes. In BBC TV series “Sherlock” and the two-movie Robert Downey Jr. saga, Adler is both adversary and lover. The Netflix “Enola Holmes” is witty and while it does Mycroft no favors, it finds Sherlock handsome and in good humor–learning to become a better brother to the titular Enola.

This pastiche is based on a series of books written by Nancy Springer, “The Enola Holmes Mysteries” (2006-2010). The six books do have a reasonable ending that give the heroine both independence and family. This movie, originally meant for theatrical release in a pre-COVID-19 era, follows the first book, “The Case of the Missing Marquess.”

Enola, we are told, is the name her mother, Eudoria Holmes (Helena Bonham Carter), insisted on giving her. Enola explains, “I know it’s an unusual name, but my mother is rather a fan of word games, and Enola spelled backwards reads ‘alone.'” A bit later, Enola (Millie Bobby Brown of “Stranger Things”) realizes that this might not mean anything because backwards, neither of her brothers’ names means anything in English. Growing up, considerably younger than her two brothers, Mycroft and Sherlock, she scarcely knows them and has spent all her time being home-schooled by her eccentric mother. “Mother said we were free to do anything at Ferndell and be anyone,” Enola explains. 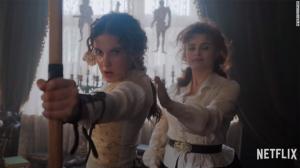 Her lessons included tennis inside Ferndell Hall (not conducive to keeping busts of forefathers intact), the classics and every book in the manor, chess, archery and self-defense. Of course, as with almost all modern hero sagas, that means plundering East Asian martial arts. Enola Holmes knows jujitsu. Her and Eudoria’s original teacher was NOT an East Asian, but a Black woman (Nigerian-British Susan Wokoma as Edith). I am getting ahead of myself. 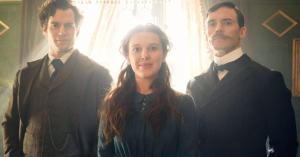 The reason for the Holmesian sibling reunion at the beginning of the film is Eudoria has disappeared on the day of Enola’s 16th birthday. Eudoria has left some gifts, presented to her by the housekeeper, but Enola needs to summon her brothers. She rides a bicycle to meet them, but the brusque Mycroft (Sam Claflin) and the concerned Sherlock (Henry Cavill) fail to recognize her. Mycroft was expecting a carriage. Eudoria had made repeated requests for money for a wide assortment of things including governesses which she never actually paid for.

Sherlock is already a famous detective and is flattered that his younger sister has kept a scrapbook of clippings on his cases. At first, Enola enthuses, “My genius brother. He will have all the answers.” Sherlock realizes that this is no kidnapping because, “You rarely find that kidnap victims have planned for their own disappearance.”

Mycroft, who is Enola’s legal guardian, has a secretive but extensive role in the government. He’s more about order and wants Enola to better fit into Victorian society. Mycroft is a misogynist, exclaiming about his mother, “Oh, good God! Feminism. Perhaps she was mad. Or senile.”  He sums up the situation at Ferndell Hall as ““A wild and dangerous woman brought up a wild child.”

Mycroft has Enola fitted for the proper garments of a young lady and brings the stern Miss Harrison (Fiona Shaw) to take her to a finishing school. His concern is to prepare her to find a good husband. As Enola’s legal guardian, he tells Sherlock that he will take care of Enola while he should find their mother. Yet the housekeeper Mrs. Lane (Clare Rushbrook) asks Sherlock, “You’ve already abandoned her once sir. I’m asking that you don’t abandon her again.”

Enola knows this is not what her mother intended. She recalls Eudoria telling her, “There are two paths you can take Enola. Yours, or the path others choose for you.” Searching for clues, she discovers money that her mother left her and, disguised as a boy, she gets on a train to travel to London. On the train, she meets a young boy about her age, Viscount Tewkesbury (Louis Partridge). He has escaped his widowed mother and grandmother and has hidden himself in a bag. Knowing that the search for him jeopardizes her own escape, Enola would rather stay far away from him, but warns him that a man in a bowler, Linthorn (Burn Gorman), is searching for him. While at first one might think Linthorn only wants to return the runaway viscount to his guardians, it becomes clear that Linthorn has a more sinister mission: murder.

Enola helps Tewkesbury escape but parts ways once in London. Part of this is because in the past Eudoria advised her, “It is good to care for the vulnerable, but not if it means risking your life. Sometimes you have to let nature take its course.” London is not as Enola imagined. It’s dirtier and less magical. Disguising herself as a proper Victorian lady, she find a dingy, horrific flat and begins leaving cryptic messages in the personal ads of specific publications she is sure her mother will read. Eudoria, Enola discovers, flashing back to certain secret meetings at Ferndell Hall, was a member of a covert radical group of suffragettes. “She was my whole world, but she didn’t share everything with me,” Enola recalls.

Unfortunately, Linthorn find Enola and almost drowns her trying to find the location of the viscount. That leads Enola to find Tewkesbury, despite remembering her mother’s advice: “Paint your own picture Enola. Don’t be thrown off course by other people. Especially men!” The viscount’s father recently died, leaving the heavy weight of being both a peer and an heir on Tewksbury. He’s running away because of the plan his family has for him. “I realized I was scared. Scared I would hate every second of the rest of my life.”

Although they manage to avoid Linthorn, Mycroft has enlisted Scotland Yard’s Inspector Lestrade. Lestrade finds the two teens. Enola urges Tewkesbury to flee because, “If he catches you, your life will be in danger. If he catches me, it’s simply a life I do not want.” Enola ends up in Miss Harrison’s finishing school. She will escape and she will save Tewkesbury. [Spoiler alert] And she will solve the mystery behind the attempts on Tewkesbury’s life before Sherlock.

The film ends with Enola on her own but with at least one friend whereas at Ferndell Hall she thought, “I don’t need friends. I have my own company.” She has an ally in Sherlock and she has a purpose, “I am a detective, I am a decipherer, and I am a finder of lost souls. My life is my own. And the future is up to us.”

“Enola Holmes” takes place in England in 1884. Although Victoria was queen (1837-1901), women were banned from voting in Great Britain under the Reform Act of 1832 and the Municipal Corporations Act of 1835. It would not be until 1918 that the Representation of People Act of 1918 would give all men over 21 the vote as well as all women who met property qualifications (must be householders, wives of householders, occupiers of property with a certain annual rent and graduates of British universities). Only in 1928 did all women, 21 and older, get the vote on equal terms with men. That contrasts the US, where nationally women were given the vote in 1920. Women would have to wait until after World War II in Japan and France (1945). The UK wasn’t the first, but it also wasn’t the last in Europe of within the West.

In the UK, there was a radical group of suffragists, most notably Emmeline Pankhurst (1858-1928) . Her husband, Richard Pankhurst (1835-1889), was a barrister who had supported women’s suffrage before meeting Emmeline (née Goulden) and together they had five children. Emmeline formed the Women’s Social and Political Union (WSPU) which took as its motto: Deeds not words. At first their strategies were non-violent, but that changed. In 1912, they became known for breaking windows of buildings, night-time arson of unoccupied buildings, cutting phone lines, letter bombs and planning to blow up buildings. At The Derby in 1913, member Emily Davison was trampled to death when she attempted to drape a banner. In 1913, two of Emmeline’s daughter, Adela and Sylvia, left the WSPU.

Emmeline controlled the membership of the WSPU. Emmeline’s oldest daughter, Christabel, worked alongside her mother, but ended up living in the US. Adela became an activist in Australia and New Zealand, leaving the UK in 1914. Sylvia formed the East London Federation of Suffragettes in 1914.

In 1999, Times Magazine listed Emmeline as one of the 100 Most Important People of the 20th Century because “she shaped the idea of women for our time.” Some of the Pankhurst strategies were discussed by the suffragists in the US, however, under Alice Paul, the protests were predominately peaceful (Silent Sentinels). Paul had joined the WSPU and participated in the protests during her time in the UK.

The first Chinese person to settle in the UK was William Macao, Edinburgh, Scotland. By 1901, about 387 Chinese people were living in the UK. In 1884, about 264 Japanese nationals were in the UK, most of them officials and students. Japan had been opened by Commodore Matthew Perry in 1853 and that re-established trade between Japan and nations other than the Netherlands, Korea and China. The India-born Edward William Barton-Wright (1860-1951) supposedly first introduced jujitsu to Europe in 1898. Asia represented by Pakistani-Kenyan Brit, Adeel Akhtar, in the film.

Scrabble was originally created in 1938 by an American architect, Alfred Mosher Butts, and called Chriss-Crosswords. He also created the word game named Lexiko. Both Lexiko and used tiles which were originally cardboard. Butts met James Brunot who helped develop and game and the named was changed to Scrabble. The wood tiles required hand stamping of the letters.

Despite what one might consider cultural appropriation (jujitsu), Enola is a fun family film that encourages individual investigation, helping others and not taking oneself too seriously. Unlike other iterations of Conan Doyle’s creation, it shows more respect for women as individuals during a remarkable period of history.