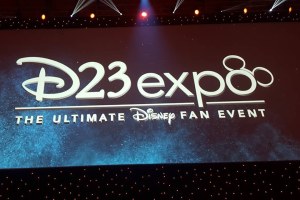 Disney’s D23 Expo at the Anaheim Convention Center has grown and expanded since it first started in 2009 as the ultimate Disneyana fan experience scheduled in August. People plan two years in advance for this biennial event, but instead of steadily improving, this year’s event stumbled from the beginning to the end and that’s something you won’t read in the Disney D23 press releases.

In 2009, Disney was a different company, it had yet to acquire LucasFilm and so there wasn’t a Star Wars contingent to contend with. The big topic then was the fourth Pirates of the Caribbean movie and  the animated feature “Tangled.” John Depp as well as John Travolta, Nicolas Cage and Tim Burton made appearances. Miley Cyrus was still squeaky clean as Hannah Montana and the Muppets were getting a new movie.

In 2011, the queues were still calm compared to the annual San Diego Comic-Con in July, but that would end when Star Wars crash landed at the third expo in 2013. In addition, Marvel fans were also part of the over-night weekend warriors. In 2017, D23 Expo tried to steal some of SDCC’s thunder by jumping from August to mid-July (July 14-16), the weekend before the long SDCC main event (20-23 July 2017), but only days before the preview night (19 July 2017). That’s a lot of loot to spend, even with a two-year planning schedule.

In its sixth year, Disney added Fox shows to the line up and D23 Expo rolled out some changes: Gold memberships, a Gold Member line, online reservations and combining some panels to create a greater frenzy. Gold members bought their tickets far in advance during the 23 August to 20 November 2018 pre-sale.  Yet Gold members were just as surprised as anyone when Disney announced that online reservations for panels, swag and shopping. I bought my tickets in ; the D23 Expo announcement came on 14 August 2019 that online reservations would be made on Friday, 16 August at 12 p.m. PST/3 p.m. EST. Friday was a digital disaster for Gold members with the 12 p.m. start time first being pushed to 1 p.m. and then postponed until Saturday at 12 noon PST.

Expo attendees complained that they had taken time off of work or scheduled their lunches on Friday to get in a virtual line, while others were driving or otherwise traveling to Anaheim on Saturday. Still, on Saturday, there were glitches in the system. People were now put into a waiting room with a little walking person showing their progress, but the traffic was increased by people attempting to get in on multiple devices. One person claimed there was a software error that allowed some in the know to bypass the queues and slip in. Although the main panels were gone within 15 minutes, the on-screen reservation didn’t show this until you answered whether you were bringing a guest or not.

Yet honestly, the uproar started much earlier. When Disney announced that the movies panel would not be separated into live-action and animation in June, fans were outraged. That meant that while 7,000 fans would get into see the panel, another 7,000 would be left out in the cold. The overnighters usually filled the D23 Hall for the live-action, but right behind them were the people waiting for the animation panel. You could get up early in the morning and still get in to the second film panel and some of the disappointed overnighters could decide to take a consolation prize. This year, it was all-or-nothing and the Saturday scheduling started all the first panel at the same time, 10 a.m. So if you missed out on the D23 Hall film panel Saturday morning, you were probably too late for the D23 Arena panel on “The Simpsons” or the National Geographic presentation on “Women of Impact” in Room 28.

Friday and Sunday were actually worse: The D23 Hall panel started AFTER the D23 Arena panels. Friday, finding the right line for the Arena panel was a challenge. We started at the exhibition all, were sent to the other side of the convention center and then told to line up at the North building basement where different D23 staff sent us to different parts of the line only to again send us back to the main convention center building and then asked us to go to the back of the line of people waiting to get on to the general exhibition all floor. For those with reservation that guaranteed entrance that meant we would likely miss out 9:30  deadline when our reserved space would be given away to standby. We demanded to be in the front of the line and then at 9:08 banged on the door, explained the situation and raced to the other side of the convention center. The arena wasn’t filled, but through the weekend, we learned reasons why. During our time in various lines, we talked to people. Some people were in the basement of the convention center waiting in a line that wouldn’t move until almost an hour later and they were shut out of the arena. Another hopeful was waiting in the Legends line, but that D23 Hall panel didn’t start until 30 minutes after the D23 arena panel. By the time they learned they weren’t getting in, it was too late to use their reservation for the arena event (“Dancing with the Stars”)  which had already started. On Saturday, those out-of-luck for the D23 Hall panel on films, could still race to the arena for “The Simpsons.”

By Saturday, the arena still didn’t have a dedicated line and because the exit and entry to the arena used the same doors that fed into the convention center (instead of outside into the courtyard between the arena and the North building), advance line up for the Gold members could only begin once all the people were out of the arena, but the standby people could line up earlier but only AFTER the convention center opened up at 9 a.m.

While your online reservation meant you could bring a plus one, it also assumed that your kids were coming with you if they were under the age of 14. D23 Expo advised not to activate the badges of “guests under the age of 14.” That might have left some independent 12 and 13 year-olds a bit disgruntled. They had to follow their parents, or their parents had to make sure they got in line for event. If you had a Gold advantage, that could only be used by one person if you chose the family membership.

Some of the lines got unruly–there was line-jumping Saturday morning. Previous problems had already brought restrictions–no inflatable mattresses, no umbrellas and no chairs (unless the chairs could fit into a backpack). At the 2017 lines, people left their chairs, mattresses and large beach umbrellas to be picked up and trashed by the line minders. It was astounding while waiting for the animated film panel, to see the garbage left behind by the live-action line. Problems from the Friday night line led to further restrictions such as no pillows. While the official line doesn’t start until the evening, when we came on Friday mornings previous years, people were already forming an informal line at 8 a.m. If you’re going to be out in the toasty sun on a hot August day in Anaheim, you’ll need an umbrella and rumor has it that like John Steed of the British TV show “The Avengers,” a disgruntled overnighter used his umbrella as a weapon. The rules, rules, rules were written out and the contraband explained endlessly, but that didn’t keep people from trying. Yet what really fueled the line frenzy was 1) the decision to make the film panel one instead of two separate panels, 2) eBay reselling of exclusives and 3) anxiety of not getting in despite having a reservation.

D23 Expo has usually been marked by Disney efficiency because the park has lining up down to a science with entertainment and views that make waiting in the longer attraction lines less painful and sometimes even entertaining. D23 Expo 2019 had a serious breakdown. Even being first in the Gold line didn’t mean one got the best seat. Going into the D23 Arena on Saturday afternoon–when the convention was half-over, we were led to the farthest grouping of chairs to the right side of the floor until my husband objected. What should have happened is the center area should have been filled from two direction inward with the people going toward the center aisle. That was a surprising mistake. The other mistake was the Michelle Warner of “Entertainment Tonight” wore a too-short dress and had her modesty preserved by Golden Globe winner Traces Ellis Ross who twice lent Warner her jacket and Laurence Fishburne, gallantly gave Ross the shirt off his back–he was wearing a shirt underneath so don’t get too excited. Fishburne and Ross along with the Anthony Anderson are executive producers of the “ish universe” which will be adding a prequel–“Mixed-ish,” a new TV series that explores Rainbow Johnson’s life as a teen emerging from a commune life and racing the world with a hippy white father (Mark-Paul Gosselaar) and a black mother (Tika Sumpter) and two younger siblings.

While a good attitude helped one survive a weekend of D23 Expo and its lines, D23 Expo could and should be better but there doesn’t seem to be someone on-the-ground with the background of experience as one sees in the volunteer supervisors at conventions like SDCC. One wonders if one complains, will the mouse listen? Or even if one of the mousey minions listens, will that listener be back in two years to make improvements in D23 Expo 2021? Will the Star Wars convention in August of next year be any sign? I’ll let you know in August 2020.

D23 Expo is still the most family-friendly event (the costume/cosplay rules emphasize this), but it could be friendlier and people could be happier at this celebration of the happiest place on earth.