Cinemax’s “Warrior,” Season 1, Episode 6 ‘Chewed Up, Spit Out, and Stepped On 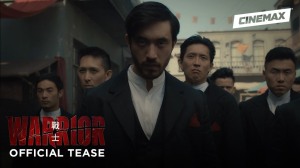 “Chewed Up, Spit Out and Stepped On” marks the point of no return. The tong wars begin and Bill O’Hara loses his soul. What better time to make changes then the new year?

This episode begins with sound of drums–not beating a war cadence, but one of notification. Soon cymbals are added and we see crowds of tong and non-tong members in the streets of Chinatown enjoying a parade and these scenes are intercut with two lusty lovers impatiently getting down to business in another part of town. The firecrackers crackle as the dragon and lion dancers make their ways through the streets of Chinatown.

It’s the Chinese New Year’s and people are celebrating in different ways. Ah Sahm is having a lusty romantic tryst with Penelope, the mayor’s wife, outside of Chinatown. The other Chinese are out watching the parade. The parade passes the Long Zii territory and we see Li Yung give something to a Hai Fung tong member from behind the green platform of the Long Zii where Long Zii and Mai Ling are seated. It would be either around 2 February 1878 or 22 January 1879.

Wang Chao tells five white women that the firecrackers are meant to frighten the demons who come down from the his cave in the mountains on New Year’s Day to eat the children. The women laugh in giddy excitement.

Bill O’Hara and Richard Lee are watching the crowd as they follow the parade in what seems like crowd control.  Lee is enjoying himself, eating some of the street food. O’Hara suspects it might be dog meat, but Lee assures him that he grew up on a farm and knows what pig tastes like. O’Hara still isn’t sure and tells him that if Americans ate dog, they wouldn’t like it, but Lee isn’t so sure. Ah Toy is watching and gives a look of acknowledgment to Bill O’Hara as they pass. She’s fanning herself with hong bao, red envelopes which usually have money.

As the parade enters Hop Wei territory, Father Jun takes a seat on a red platform with Bolo at his side. Two Fung Hai in masks light firecrackers that roll under the red Hop Wei platform. Running through the crowd, the two Fung Hai bump into Lee who tries to follow at the same time that Young Jun figures out what’s happening and warns Bolo.

Dynamite explodes beneath the Hop Wei platform (as, one assumes, both Ah Sahm and Penelope climax at her artist studio).  In Chinatown, Bill O’Hara regains consciousness to see the inert bodies of the white women who had been listening to Wang Chao. One doesn’t get up, but Wang Chao helps and comforts one of the women who is now weeping.

Bolo got Father Jun off of the platform and now rises leaving Father Jun on the ground. Young Jun runs to his father who is lying still but realizes his father is still breathing and calls (in English but this would be in Chinese) for help.

After the credits, we return to Penelope and Ah Sahm at the artist studio with Penelope, the mayor’s wife, and Ah Sahm both in the bath together. He begins telling her about the fight that changed his fate. “This is about five years ago. There was this guy a few towns over. Everyone said he was the guy to beat. I went over with friends and challenged him. We did it all the time; no big deal. In the fight I hit him. Not even that hard really. He lost his balance and hit his head on the ground and he never got up.”

Ah Sahm replies, “That didn’t make him any less dead. Turned out his father was a local warlord.”  The warlord, Sun Yang (?) threatened to kill me and take my father’s farm. And he would have, but my sister Zhao Zhing (?) offered to marry him.” He adds, “She gave up her life and married the old man to save me.” Ah Sahm adds, “I guess it never occurred to me that she was the one that needed to be saved.”

“We can do that, women. Save ourselves,” Penelope reminds him.

On another part of town, Bill O’Hara comes home to find Jack Damon waiting for him with his youngest in his lap.

Damon says, “Damn Chinese. Bunch of savages, if you ask me.”

Damon says, he’s “working a case. Hoping you can give me your expert opinion.” As his wife goes upstairs, Damon asks, “Honestly Bill, how does a sod like you end up with a fine lass like that.”

Bill threatens Damon, but Damon reminds him that even if Bill killed him, Damon is just the messenger. “Your three weeks are up. You either have it or the white mountain awaits.”

O’Hara claims he has the money, but says, “Not here. I’ll meet you at the Banshee tomorrow night.”

Damon and O’Hara are set to meet at the Banshee at 10 p.m. and Damon warns, “If I were you, I’d make damn sure I didn’t forget to show up.” Then, in case you were thinking of sympathizing with Damon, Damon adds, “Maybe give that lovely wife of yours a poke for me.”

Back in Chinatown, Young Jun is waiting to hear about his father when Ah Sahm arrives. Young Jun knows it is the Fung Hai, but he doesn’t know why. Young Jun and Ah Sahm visit Wang Chao and asks why the Fung Hai attacked them. Wang Chao claims not to know, but after Young Jun draws a gun on him, Wang Chao tells Young Jun that if he wants his help he needs to put the gun away. Ah Sahm shuts the door.

At the police station, Richard Lee is figuring out the territories of the tongs and is the only one who seems to realize that there’s a third tong involved or that Chinatown is divided up into territories. Lee has learned about the Fung Hai, but while he’s drawing up a map of the territories, he also notices a man watching him. When he looks up again, the man is gone.

When Lee tries to explain what he’s learned about the three tongs to O’Hara, O’Hara says, “Who gives a shit?…A Chink is a Chink; a criminal is a criminal.”. He tells Lee to sit on his porch in an old rocker with a shotgun and that he will be back before dawn.

Back at the Hop Wei, the leaders are having a meeting wondering about the Fung Hai, “Why would they attack us without provocation?” Young Jun knows, and tells the elders that “a reliable source” told him that the Fung Hai “made a deal with the Long Zii.”

While older tong members counsel that “now is the time for careful consideration,” Young Jun wants to fight back because “the war’s already started” and “they drew first blood.”

Ah Sahm supports Young Jun and says, “This is Young Jun’s call. If he wants to scrap, we scrap.”

What settles the matter is Bolo who decides to support Young Jun.

In another part of town at a posh whites only dining establishment, Mayor Blake (Christian McKay) is primping to meet with Senator Robert Crestwood (Patrick Baladi) with Walter Buckley (Langley Kirkwood) by his side. Of course, the senator is concerned about the tragedy in Chinatown. While the mayor insists it is an anomaly, Crestwood says, “I suppose we’re to blame for teaching them demolition on the railroads” and lists the problems–opium, gambling, prostitution, the two murdered Irishman, the dead woman.

Crestwood notes, “The Chinese have depleted their own resources and now they’re swarming across the ocean.” He had a hand in writing the Chinese Exclusion Act, but because there is opposition to it in Congress and in the Taft White House, he intends to run for president.

Crestwood wants Blake to do “what needs to be done” and reminds Blake that “It will not look good for me to have American citizens slaughtered in my own state.”

Senator walks away with Buckley and outside of the dining room, the senator comments that Buckley has “been busy.” The senator has promised to take Buckley with him to the White House and considers the headline in the Herald, “Bombing in Chinatown Kills Woman; The Chinese Menace on Society” to be “political gold.” He also asks Buckley to keep the mayor “on a short leash.”

Back in Chinatown, the Hop Wei trio of Young Jun, Ah Sahm and Bolo visit the Fung Hai.gambling house. Young Jun bids them, “Happy fucking New Year, before the fight begins. Sometimes, one brings a knife, but it’s a gunfight.

The dumped corpse leads to Father Jun meeting to talk with Long Zii at a Buddhist temple.

Long Zii asks Father Jun to “agree to accept my offer to renew the truce with penalties, of course.”

Father Jun makes it clear that “There can be no peace until the Fung Hai are dealt with. Those are my terms.”

When Young Jun complains, Father Jun says he met with Long Zii “only to say goodbye. We won’t be seeing him again.”

Richard Lee has been sent to protect O’Hara’s household. Bill’s  wife, Lucy O’Hara (Emily Child), brings him dinner. After she asks, Lee tells her he’s there “just a precaution” because “Bill and I have been chasing after some pretty nasty men and he asked me to keep an eye out while he works late.”

Lucy replies, “You’re sweet and you have good manners, but you have to work on the lying. Stick with Bill and I’m sure you’ll get the hang of it.” Lucy knows something is seriously wrong.

Back at The Banshee, some lovely fiddling music plays in the background as Bill meets with Dylan Leary (Dean Jagger) and asks for a loan. “Even a blind dog learns after a few beatings,” Leary tells him turning him down. “I’m not vouching for you Bill. God knows you’re a bad bet.”

Leary gives O’Hara the money, but when Damon tried to take it Leary confronts Damon, but Damon replies that “Irishmen need to eat just like everyone else.” When Leary asks if his father would feel good about Damon working for the Chinese, Damon replies, “My father died a penniless drunk and in this bar by the way.”

Leary challenges Damon to a fight, telling Damon that he can have the money Leary has lent to O’Hara and will be forgiven for working for the Chinese if he can go two rounds with Leary. They go outside and take off their shirts. Damon is already at a disadvantage. Damon has limp.

Leary quickly gets the advantage, but Damon can’t help trash-talking Damon, saying, “Your mother was a germ-ridden cunt. I wouldn’t fuck her with my stick.”

Leary beats him down and keeps beating him even after Damon is lying still on his back. O’Hara asked him to know because “you’re going to kill him.”

Leary stops and says, “No Bill, you’re going to kill him.” Bill O’Hara beats Damon to death with Damon’s own walking stick.  O’Hara returns home in the early morning and Lee says, “You looked chewed up, stepped on and spit on.”

Lee doesn’t ask what happened, but leaves him to go to work. O’Hara’s family is beginning to stir and his wife asks him to help with the kids, but O’Hara wants a few hours of sleep. O’Hara goes into the bedroom and shuts the door. Sliding down onto the floor,  O’Hara breaks down and weeps.

This is an episode of unhappy wives and men becoming further entrapped by cycles of violence. Things are not going to end well.