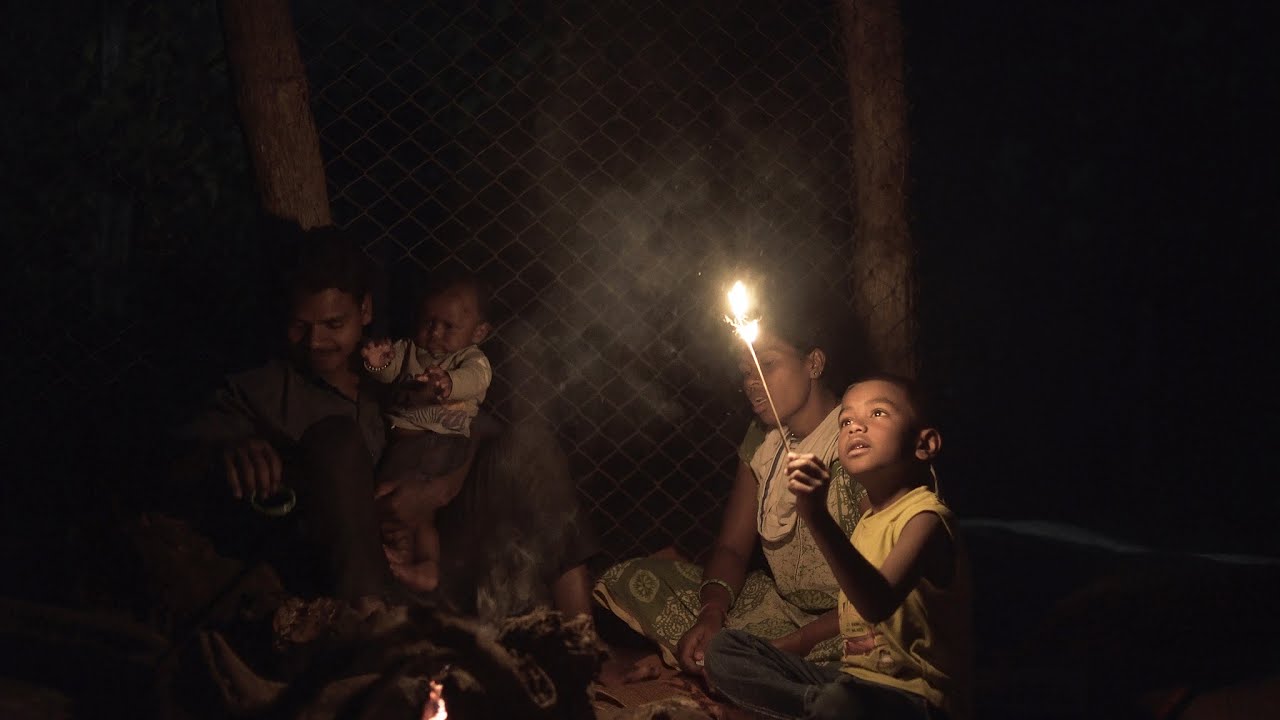 “A Rifle and a Bag” is an intimate look at a former Naxalite couple who have surrendered to a system that still works against them. The film, like “Writing with Fire,” gives us an idea of how a caste system functions in today’s world and leads to questions about recent US rhetoric about racism.

The film begins with an explanation:

The Naxalites, an armed Maoist rebel group, have been fighting the Indian State for the rights of tribal people for the last 50 years.

The Indian government considers them the biggest threat to India’s internal security.

Under the Indian government’s Surrender Policy, individual Naxalites are granted pardon in return for deserting the movement.

A fire burns in the forest. We hear the call of wild animals. We’re not going into the jungle. We’re  following a couple, Somi and Sukhram. The two met while in a commando unit of the Naxalies and surrendered together.

Somi is the woman who asks where the key is. Through this interaction, we see the rustic conditions under which she and her husband live. The little boy doesn’t seem to know where the key is and it is the little boy’s future that is the heart of this documentary.

Somi and Sukhram surrendered to the government. The resettle in Maharashtra, but not her son needs to enroll in school, but their past comes back to haunt them. The parents need to get the father’s cast/tribal certificate. In order to do so, they would have to go to Chattisgarh, the place that Sukhram and Somi escaped. Going back there would put them in imminent danger.

The documentary was shot over a period of three years, with about 50 days between 2017 and 2019. In order to build up trust, the directors, Asian Indian Arya Rothe, Romanian Cristina Hanes and Italian Isabella Rinaldi spent five months to get to know them. Much of what we see is the family going about their daily lives and some of this seems indulgent. Although the film comes in at 87 minutes, it seems overlong for the content presented.

The value of this film in its striking visuals and presentation of frustrating social dilemma is to present an aspect of a caste system as it exists today. With the publication of Isabel Wilkerson’s “Caste: The Origins of Our Discontent,” the Pulitzer Prize-winning author “says racism is an insufficient term for the systemic oppression of Black people in America,” and she “prefers to refer to America as having a ‘caste’ system,” according to an article in NPR.

The book sparked national debate, and while the NPR article touches on going outside the binary of Black and White, an Asian Indian American anthropologist, Arjun Appadurai, who was born in Mumbai, wrote a thoughtful critique for Wire, “Comparing Race to Cast Is an Interesting Idea, But There Are Crucial Differences Between Both.”   Appadurai notes that her thesis uses anecdotes and allegory, but does not stand on a strong structural foundation.

I cannot resist the temptation to criticise Wilkerson’s book from the vantage point of a specialist in the anthropology of India, who has spent the better part of four decades poring over hundreds of books and essays about caste. That might seem both too easy and somehow beside the point for a book in which caste is mostly a device to offer a new picture of the racialised world of the US.

Yet, it is important to point out a few differences which make a difference, between caste and race. Caste crystallised over several millennia of Indian history, primarily as a cosmology which allowed pastoral and agricultural colonisers from the Northwest of the subcontinent to gradually colonise thousands of groups and communities who were previously not organised into castes. The new framework allowed many locally dominant groups to organise their local subordinates into a system which conflated rank, occupation and purity into a single status system. This is very different from the creation of whiteness as a category of domination in the context of the colonial and later independent US.

Then, there is the matter of purity and pollution, also discussed by Wilkerson, which many of us see as the driving source of caste ideology in India, whereas in the US, the polluting status of black Americans is an effect of racialised ranking and not a cause. Also, the Indian caste system is geared to an infinity of caste ranks, and many Indian villages have 30 or more hierarchically ranked castes (jatis), all keenly aware of who is above them and who is below.

Finally, while the top of the Indian caste system, usually composed of Brahmins, is permanent, closed and unquestionable, the bottom, which is certainly defined by Dalits (Untouchables) is strangely porous, since every Indian caste, including the lowest, has someone or some group, usually in a neighbouring village, who performs polluting services (like cremation, scavenging and hair-cutting) for them, and is therefore lower than they are. In short, no group in India, however low, lacks a group beneath them that lets them feel purer. This is very different from the exclusionary logic of race, which is binary (black versus white) and lacks any cosmological basis for one black person to feel racially superior to another black.

While Appadurai notes there was a flow of ideas between Dalits and African Americans, the “mutual admiration cannot be the basis for the sort of deep structural comparison that Wilkerson is keen to make.”  Appadurai continues:

I must raise one other question, since Wilkerson expends a great deal of effort to show why the similarities between caste in India and race in the US are so striking, so relevant and so much more important than the differences. My question is this: if caste in the US is a kind of code, which is buried deep under the surface of race (and of the brutal etiquette and institutions of race and racism), how can we compare it to a society like India, where caste is both the code and the everyday reality? Put another way, either India has no underlying social programme, grammar and theory, and its social world is simply caste all the way up and down (something I doubt) , or Wilkerson’s dramatic unearthing of caste under the surface of race in the US is just a literary device to tell a familiar American story in an unfamiliar way, and is not based on a genuine similarity.

I lean towards the latter reading.

The 72-year-old Appadurai, who is a former University of Chicago professor of anthropology and South Asian Languages and Civilizations, Humanities Dean of the University of Chicago, director of the city center and globalization at Yale University, and the Education and Human Development Studies professor at NYU Steinhardt School of Culture ,gracefully thanks Wilkerson “for reminding us of their affinities,” but he also reminds us all that racism and prejudice in the United States cannot be viewed on a binary of Black and White, that others such as people of Asian descent need to be included in order to make valid conclusions.

The documentary, “A Rifle and a Bag,” provides an example of the caste system at work in India from the viewpoint of three female documentarians as well as showing one strategy of dealing with domestic ethnic strife, both the good intentions of inclusiveness as well as the systems failings.

“A Rifle and a Bag” premiered in January 2020 in the Netherlands. It was part of the AAIFF 2021 programming.