‘Wonder Woman 1984’: A Woeful Waste of Time and Talent ✮✮

Patty Jenkins’ sequel fo the 2017 “Wonder Woman” is a bloated excuse for reuniting Gal Gadot’s Wonder Woman/Diana Prince with her true love, Chris Pine’s Steve Trevor. There are some moments that delight, a brief one about 1980s fashions and a special cameo by the 1970s Wonder Woman, Lynda Carter, but that’s not enough to carry 151 minutes.

The film begins with a voice over of Diana Prince (Gadot) musing that one never realizes when one is learning lessons as she recalls a super pentathlon Amazonian event that resembles a high tech American Gladiator competition crossed with a Cirque du Soleil performance. On her home island of Themyscira, Diana is the only young girl (Lilly Aspell) competing with older adult Amazons. Diana is temporarily in the lead, but takes a shortcut and is disqualified. Her mother, Queen Hippolyta (Connie Nielsen) and her aunt Antiope (Robin Wright) sternly remind her of the importance of truth.

Decades later,  an adult Diana is the senior anthropologist at the Smithsonian Institute in Washington, D.C. In her off time, she wanders around the city, saving joggers from speeding cars and foiling jewelry store robbers. At her posh apartment, she has photos to remind her of her hot World War I romance with Steve Trevor, including the watch he gave her.

A new co-worker, the bumbling and insecure archaeologist gemologist Barbara Ann Minerva (Kristen Wiig), meets Diana and together they look at artifacts brought in by the FBI. A natural crystal formation of citrine is crudely set in a bronze ring that in Latin instructs the holder to make a wish. Musing about the artifact, Diana wishes for Steve Trevor. A slight breeze ruffles her hair. After an unpleasant altercation with a drunk man, Barbara, is saved by Diana, but goes back to the office and touching the artifact, wishes to be like Diana. Again a wind disturbs her hair. Barbara Minerva will become like Diana but by channeling the cheetah, or at least how writers poorly informed about zoology imagined a cheetah.

The artifact is the Dreamstone which grants the wish of any one touching it, but having been created by the god of trickery and deceit, Dolos, the wish has unexpected consequences for each dreamer.

Someone has been searching for the Dreamstone, a businessman and television celebrity, Maxwell Lord (Pedro Pascal). His motto is:  Life is good, but it can be better.  Lord is more low-rent Gordon Gekko (and definitely not the current man in the White House) or a con man whose cover has slipped. Yet, Lord proclaims, “I am not a con-man; I am a television personality.”  He has oil rights on land that others had passed over and is a possible Ponzi scheme engineer. He promises his son a pool and a helicopter, but his large offices are empty with desks that have been hastily vacated.

Maxwell is being feted at a large party which both Diana and Barbara attend. Both women are in towering heels. That’s a severe setback to the feminist gains made with Wonder Woman’s costume. At the party, Diana meets a man who at first she doesn’t recognize. To make her wish come true, Steve Trevor’s spirit has returned, taking over another man’s body (Kristoffer Polaha?). “I wish we had more time,” he tells her and gives her his watch. I can save the day, but you can save the world.”

When Diana finally realizes what has happened, we see Chris Pine instead of the reality of the man. During this time, Maxwell has been seducing Barbara to get the Dreamstone. With the Dreamstone, he begins his plan to take over the world. After a romantic interlude, Steve and Diana are ready to find out more about the Dreamstone, but first, there’s matter of getting Steve appropriately dressed. This segment is charming and leads into a few more moments where, instead of Diana being the innocent discovering the outside world, it is Diana showing the world of the 1980s to Steve who died during World War I (1914-1918). That was before escalators and DC (as in District of Columbia) has some extensive escalators.

The opening sequences in 1984 take too much time giving us a tour of the styles of the 1980s for laughs. Although her necklines are probably too plunging to be acceptable for an office, I love the fashion styling on Diana except for those killer high heels. If you’re into cosplay, then you’ll have something worth seeing, including Wonder Woman’s new golden getup. As far as this interpretation of Wonder Woman, Diana’s lasso works more like Spider-man’s webs and she swings around instead of flying. In 2020 (or 1984), we’re still going with a confused interpretation of what a cheetah is. A cheetah is swift, not strong compared to jaguars and leopards.

I can’t speak for women who have doctoral degrees, but considering the recent comments about Jill Biden’s desire to be called doctor, this script suffers from not giving more respect to normal women with that degree.  In 2020, one almost demands a more competent version of a Dr. Barbara Minerva, even if it is 1984. She’s a woman whose talents are so exceptional, she beaten out men for a position at the Smithsonian.

As director Patty Jenkins fails to provide logical transitions (note Diana’s sudden wardrobe changes as an example) and flowing tonal changes. As co-writer with Geoff Johns and David Callaham, she fails to rein in the overindulgent tendencies of big idea action scenes. Perhaps writer Jenkins was too in love with some concepts for director Jenkins to edit out for better flow and a shorter running time. 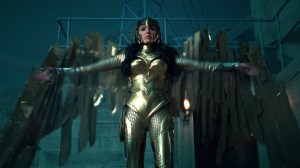 As you might expect, there’s a lot of CGI, but if often comes off as too clean and crisp to be believable. With the CGI in place it’s also disappointing that the framing of the shots aren’t exceptional. The 2017 “Wonder Woman” was better paced and had a more balanced tone. The lesson in “Wonder Woman 1984” is: Beware what you wish for. This film proves to be a unfortunate example of that maxim. “Wonder Woman 1984” may be bigger than its predecessor, but it is not better.