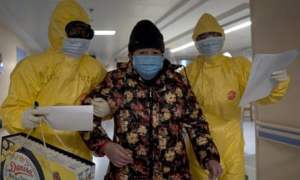 According to Hao Wu during a recorded discussion after the AFI FEST screening, his parents had been diagnosed with late-stage cancer and in January, he had planned to take his whole family to China for the Chinese New Year. With the lockdown, he sadly could not take his two kids. Wondering when his parents could see their grandchildren, he did go to Shanghai and what he observed shocked him: empty streets during the country’s biggest family festival. Returning to New York, after reaching to over a dozen people, he eventually found two journalists working for Chinese media who were willing to work with him.

The footage, a small portion of what was collected, portrays a city of 11 million people under a 76-day lockdown through the eyes of frontline medical professionals, working against a phantom illness in four hospitals, with two hospitals as principals. By blending the footage of all four without breaking them down as distinct entities, Hao means to focus on a story of survival. The film doesn’t specify this is COVID-19 and that’s intentional.

Hao seems particularly well-suited for this story. According to Wikipedia, Hao has a BS in biology from the University of Science and Technology of China (1992) and he followed that up with an MS in molecular biology from Brandeis University in 1995.

During the recorded discussion following the AFI FEST screening, Wu said what he found most unique was the personal interaction in the hospitals. The patients weren’t allowed to leave their rooms to avoid cross-contamination. To break their isolation, “the medical workers often went beyond” what was necessary. 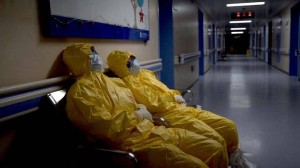 Hao had just finished editing in August. His virtual journey on the festival circuit has just begun. While he feels that in the US the main problem is a “lack of leadership” at the very top although in some cases the state and municipal governments have attempted to make up for that. What he the film will do is “remind people to be ready for the second wave,” and to wear masks. The world needs to work together to find a solution. At a more personal level, Hao thought that people should be kind to their families, to their neighbors and to strangers. Don’t “other” people.