‘After Parkland’: Heartbreaking Look at a Recovering Community ☆☆☆☆☆ 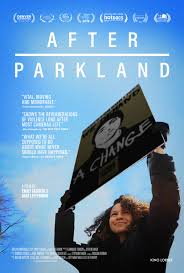 For one high school, the meaning of Valentine’s Day was changed forever and “After Parkland” reveals the naked hearts of parents, friends and classmates recovering from the deaths of 17 people. It was two years ago, on a Valentine’s Day afternoon that the kids and teachers at Marjory Stoneman Douglas High School in Parkland, Florida, were under attack by a single gunman with an assault weapon.

That day transformed lives of the survivors. You won’t hear the name of the shooter mentioned, but you’ll hear the name of the victims. You’ll hear the experiences of people who were there. We follow seniors David Hogg and Sam Zeif as they get in their separate cars and return to campus, with an uncomfortable number of law enforcement on hand. The elevated presence of officers continues even a month later.

Some of the people go to the White House. A few rise to prominence such as Hogg. There are walkouts. For some the high school seems like a “ghost town” because the young girl explains, “I remember the people who used to go here.”

We follow these survivors as they attend the March for Our Lives in Washington, DC. and as the basketball teams continues its season, coached by a father who lost his son in the shootings.

This isn’t about politics, left or right. This documentary isn’t about Democrats or Republicans. This isn’t about taking away guns or abolishing the second amendment. This is specifically about assault rifles, weapons of war made available to civilians. This is about how a community slowly reaches out to teach others and attempts to both heal from heartbreak and honor the dead.

“This film is dedicated to the lives lost on February 14, 2018 their families and the survivors in Parkland and those affected by gun violence everywhere.”

“After Parkland” takes us behind the headlines and into the families to witness the painful process of moving on and honoring the dead. After a theatrical release on 12 February 2020, the documentary will be available on Hulu from 19 February 2020.