‘Scandalous’ and the Slippery Slope ☆☆☆☆ 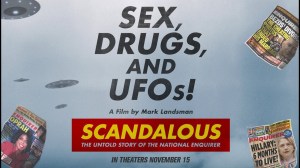 In these Trumpian times, there can be no better time to reflect on the slippery slopes that bring us to ethical dilemmas. Trump, among other celebrities, is involved in “Scandalous: The Untold Story of the National Enquirer” and that’s not exactly news, but the extent that the National Enquirer was involved in making deals and stroking egos is worth noting. This is a documentary for our times told by the people who saw it happen, reporters who cared more about getting the scope than the morality or integrity of their actions.

I can hardly remember a time when the National Enquirer wasn’t a phrase that means sensational, salacious and, often, not particularly factual news. A time before it was given a nod in the Men in Black series. Yet I was surprised to learn that it began by feeding the ghoulish impulses of the common man and woman–printing details about gruesome deaths.

The Enquirer began as the New York Enquirer and was bought by Generoso Pope, Jr. in the 1950s. He rebranded it and renamed it the National Enquirer. What had been a racing and sporting paper became a tabloid sold everywhere–usually your local supermarket, and nothing was too low (medical odd new) or too ethically-challenged (conspiracy theories or photos obtained by aggressive photographers) to print.

Not everything that was news or could be news was printed. Deals where made to kill stories. Bob Hope’s philandering was covered up in exchange for nice exclusives. The same deals were made with Bill Cosby. Stories were killed in exchange for favors. As it turned out, Trump and his lifestyle turned out to be popular and Donald Trump was willing to team up with the National Enquirer for a bit of self-promotion. If it has stopped there, it might have been fine, but it didn’t and what happened then, ended up in court. Trump’s associates were not on the winning side. Neither was journalism when it came to ethics.

Director Mark Landsman (“Thunder Soul”) takes us through a breathless history, interspersing candid interviews with former staff members as wells media observers. The reporters talk about the money, the endless bankroll that might have made police work easer and more ethical journalists might have gotten great socially aware stories possible. Instead, the money was funneled into news as a commercial venture. You get the feeling these people made a deal with the devil and sometimes, they did feel the sting (like when the Cosby sex scandal story was killed).

This film was produced by This Is Just A Test Media in conjunction with CNN Films and AGC studios (who served as executive producers. CNN Films has North American broadcast rights; AGC has international sales and distribution. Magnolia Pictures released this film in Los Angeles this weekend.

CNN has, of course, been one of the targets of Trump’s wrath. That alone should make it worth seeing, but for those concerned with fake news and ethical reporting, this is a must-see. For journalists and aspiring writers, it is a cautionary tale. Truthfully, this is something that all concerned citizens should see and discuss because is is part of our history and it plays as a tale of the many who mistook the slippery slide down the wrong ethical path for a jolly roller coaster ride. Sure it might have  been fun while it lasted, but when the ride’s over there are consequences to be paid and we’re seeing those things come out now.

“Scandalous” is currently playing at the Laemmle Royal.