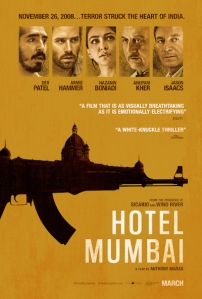 If there are any lessons to be learned from “Hotel Mumbai,” it’s that one should be kind to the help and, through the eyes of one main character, blessings come in disguise. Although at some points, “Hotel Mumbai” baits the viewer with  movie clichés, this Indian-American-Australian thriller directed by Anthony Maras (who, with John Collee, co-wrote the script) gives us ordinary Asians Indians as heroes.

Based on the 2009 documentary, “Surviving Mumbai,” the movie begins with two different story lines. A Sikh father, Arjun (Dev Patel), preparing for work. He must make sure his child is taken care of before commuting to his job in the Taj Mahal Palace Hotel, but he doesn’t notice that he’s dropped one of his dress shoes. When he reaches work, he loses out on a choice opportunity. His disappointment is unmistakable. The head chef Hemant Oberoi (Anupam Kher)is strict and the staff is told “Guest is god.”

The second story line is a group of ten young men crossing the border in a boat, in contact with unseen faces in Pakistan via cellphones. They are members of an Islamic terrorist organization, Lashkar-e-Taiba. The date is 26 November (Wednesday) and the 2008 Mumbai attacks will be over by Saturday (29 November) and 174 people will be dead including nine of the terrorists. Different areas were attacked: Chhatrapati Shivaji Terminus, the Oberoi Trident, the Taj Palace Hotel and Tower, Leopold Cafe, Cama Hospital, the Nariman House Jewish Community Center, the Metro Cinema, and in a lane behind the Times of India building and St. Xavier’s College.

After one of the initial explosions, people seeking shelter run toward the Taj Mahal Palace Hotel and in an act of kindness, the hotel staff unwittingly let in a group of four terrorists. People are slaughtered in the lobby and the hotel employees are at times coerced into helping.

The head chef takes charge of the staff and it becomes a cat-and-mouse game of survival as the hours tick away. The Sikh waiter will be accused of being a Muslim by one of the hysterical guests and he will, in an act of mercy, remove his turban. A guest will unwittingly betray the group, helped by a reporter too eager to have an exclusive scoop.

Of the sites, this hotel will be the last to made safe. Director Maras uses real news coverage is mixed with re-enactments. The terrorist handlers are also listening and watching the news as they advise the young men in their actions.

A young couple, David (Armie Hammer) and Zahra (Nazanin Boniadi), becomes separated from their baby and attempt to reunite with the baby and the nanny (Tilda Cobham-Hervey).  A man of action but questionable morals, Vasili (Jason Isaacs) is also among the hotel guests under siege, but the real focus is on the fictional waiter (a composite) Arjun and the very real head chef, Hermant Oberoi.

This is director Anthony Maras’ first feature film which he co-wrote with John Collee (“Happy Feet” and “Walking with Dinosaurs”). Quickly paced and nuanced, the movie even provides us with the jihadists who are not two-dimensional fanatics. You might even feel a moment of pity for these misguided souls, particularly the surviver. Maras and Collee reviewed footage for the “Surviving Mumbai” documentary and spent time reviewing the transcripts of the satellite-phone conversations between the terrorists and their handlers. They also spent time at the Taj Mahal Hotel, walking the same hallways as the jihadists and the terrified hotel guests. Some of the scenes were filmed on site but others in re-constructed sets in Adelaide Studios in Glenside.

According to the New York Times, ten young men “hijacked an Indian fishing boat, killed its captain, took a rubber dinghy into Mumbai and then systematically attacked high-end hotels, a train station, a hospital and a Jewish community center over the course of three chaotic days. The 10 were members of Lashkar-e-Taiba, a Pakistani-based terrorist group, and their actions were directed by phone by people in Pakistan. Nine of the attackers were killed by Indian forces, and their bodies were buried in an undisclosed location.” The one terrorist who survived, Ajmal Kasab, was hanged in 2012.

Accounts by the survivors:

“Hotel Mumbai” is a well-told, well-paced harrowing story about a heroic staff and how fate can be kind even when one suspects cruelty.  “Hotel Mumbai” opens on 22 March in the US. In English with Hindi, Punjabi, Marathi, Greek, Russian, Arabic, Urdu and Farsi.