‘The Wedding Guest’: Turn Down this Invitation☆ 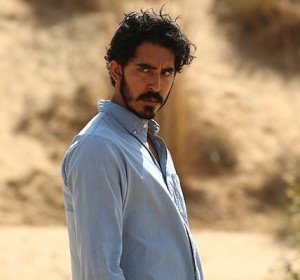 I’ve never been to a Muslim wedding and by the end of “The Wedding Guest,” you won’t have been either, but the movie might make you think of that Christian wedding trope where the priest/minister asks: “If anyone can show just cause why this couple cannot lawfully be joined together in matrimony, let them speak now or forever hold their peace.” In this movie, the wedding will not go as planned and neither will other plans entwined with the bride. “The Wedding Guest” has been called a “film noir” but lacks the visual style associated with such films and while it benefits greatly from the presence of Dev Patel, Patel’s handsome charm is dimmed by the brooding mystery of the unconvincing plot and characters that could be anyone, anywhere.

The movie begins in the UK under the bluish hues of an old European world urban setting. Patel’s Jay is packing, quickly and efficiently. He seems to have a handful of red British passports. From the UK, he ends up in the sunny, chaotic streets of Lahore, Pakistan. By the title, we know where he’s heading, but his preparations are disturbing. He buys firearms, some duct tape and rents more than one car using different names.

This is where the lies begin. He pretends to be a relative to the celebrants of the upcoming wedding. At this point, we already suspect that he’s lying, but I don’t want to spoil the initial surprise. So if you intend to see the movie, stop here and I’ll say that this is not a good film noir nor a good Patel movie. Only die-hard fans of Patel or the director/writer Michael Winterbottom should see this.

[Spoiler alert] You’ve probably already guessed that Jay is not really an invited guest and that he intends to kidnap the bride. You might wonder, as I did, if he was a jilted lover. He is able to enter the compound, find the intended bride, Samira (Radhika Apte), and kidnap her from the very bed that she’s sharing with younger female cousins. You’d think the sudden departure of a warm body would have alerted the person she slept next to, but it does not. This part goes smoothly (and one wonders what Jay would have done if it had not), almost too smoothly. The bride is tied up with zip ties, muffled with tape and blinded by a hood on her head and seems disoriented. As Jay takes his prize toward his vehicle, one of the compound’s guards accosts him and Jay first warns him, but soon shoots him dead. This enterprise has reached a point of no return.

During the escape as the fugitive couple change cars and cities, eventually we learn that Samira knew about this plan (which doesn’t explain Samira’s surprise or the need for the zip ties or taping her mouth shut). Jay was paid by her lover, Deepesh (Jim Sarbh) and now her lover seems to be getting cold feet. The murder of the guard is one complication. Another is the outcry and search for the missing bride, something that should have been expected.

While Variety’s Peter Debruge writes, “Winterbottom’s film serves as a critique of the limited options available to women in the Middle East,” he also notes that:

Winterbottom has spent far more time than most Western directors making Middle East-set stories. He first featured Pakistan in 2002’s “In This World,” and has returned to the region several times since, which pays off here in the almost casual way he incorporates the atmosphere of his Indian locations — whether it’s a crowded market or an isolated desert-scape — into the film. What’s lacking is personality from the human characters, which is a serious failing, considering how the film shifts into character mode as Apte slowly emerges as an equal to Patel, while both remain too guarded for audiences to fully appreciate as people.

Yet this boils down to an English-born male filmmaker writing about Pakistan and Muslims and focusing on the status of a woman in Pakistan without filling in the cultural norms and imperatives. Doesn’t that play into stereotypical notions of the helplessness of Muslim women? I suspect things are more complicated in Pakistan. After all, between 1988 to 1990 and 1993 and 1996, Benizir Bhutto served as Prime Minister. Bhutto was assassinated in 2007, but since then women have entered the police force in Pakistan. According to a report in Guernica, the need for policewomen was because of a women terrorists as well as a man who tried to escape wearing a burqa.

Women in Pakistan aren’t totally helpless as this movie suggests. Winterbottom doesn’t give us enough details about any of the three characters. The woman Samira speaks British English and indicates that something went terribly wrong but not what. We know nothing about the man she’s betrothed to. We don’t see the anguish of either her father or mother when she’s reported missing. Winterbottom isn’t interested in these, but he also doesn’t seem particularly interested in how Jay became who and what he is. The shift of Samira’s “affections” from Deepesh to Jay is not subtle or convincing.

Pakistan and India and their cultures are not really illustrated, but just a backdrop for a sketchy thriller that doesn’t thrill nor serve as a travel guide. In dividing countries, I had also thought of Pakistan as South Asia rather than part of the Middle East as Debruge references it, but this drama could have easily been transported to almost anywhere in Africa, Asia or Latin America with a change in casting and location titles.    In the chaos we see a place where it is easy to get new identities and get lost, but it isn’t clear why we would want to be there at all.  Surely, at this point, audiences deserve more subtle shading to provide some level of understanding of Pakistan and India and to humanize the population of both countries. Two weeks before this movie opened on 1 March 2019, Pakistan was blamed for a suicide bombing that killed over 40 Indian security force members in Kashmir, but Pakistan denied responsibility. That makes the weak illustration of the two countries even more damning; we’re left with just nebulous locations on a map; a 94-minute sunny look at a chaotic world where women must conniving control men and life is cheaper than a piece of gum and just as easy to throw away.

The moral of the story? Don’t invite everyone and his brother/sister to your wedding or you’ll end up with sketchy strangers in your home, but most of us learned that by college.