The Pre-CSI World: ‘Conversations with a Killer: Ted Bundy Tapes’☆☆☆☆

In a time of portable tape recorders larger than iPads and old-style VW bugs, a time before TV programs like “CSI” in Vegas or Miami, “Criminal Minds,” and “Hannibal,” there was a white well-spoken handsome guy who had terrified women in several states.  It was not, however, a time before serial killers.

There’s some debate where the term serial killer came from. Was it former FBI Special agent Robert Ressler who used the term “serial homicide” in a 1974 lecture? Was it LAPD detective Pierce Brooks when he created the Violent Criminal Apprehension Program in 1985? Serial killers did exist in Asia and Europe, from royalty with blood lust to cults, but the first serial killer of modern times is Jack the Ripper.

The four-episode documentary, “Conversations with a Killer: Ted Bundy Tapes,” is based on the 1989 book, “Ted Bundy: Conversations with a Killer” by a former Business Week reporter Stephen G. Michaud and his former editor, Hugh Aynesworth. Both Michaud and Aynesworth are there to tell their story along with some of the police officers who investigated Ted Bundy such as detectives Robert Keppel and Kathleen McChesney and Assistant State Attorney George R. Dekle Sr. 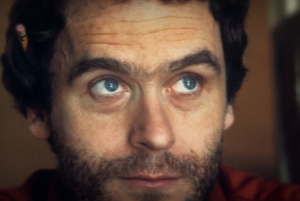 The first episodes introduces us to the time period and how the book began. Contacted by his agent in 1980, Michaud consulted with his former editor, Pulitzer Prize nominated Aynesworth.

Bundy wanted to talk because he was on death row and claimed to be innocent. Whether he was telling the truth or now, both Michaud and Aynesworth knew it would make a great story because Michaud thought, “What sort of person could have done these things?”

Aynesworth went to reopen investigations while Michaud began talking to Bundy in prison. In the end, there were 75-80 tapes, with roughly 100 hours of conversation. Aynesworth characterized his work as “very hurtful” because some of these families never found their daughters.

Michaud and Bundy had a few things in common. Both were born in Burlington, Vermont int families headed by the mother. “We were not friends, but we actually knew people in common.”

Talking to some of his childhood acquaintances, Bundy is characterized as having a temper and great ambitions. “He was going to be president…and it was a lot of blow hard talk.”

Director Joe Berlinger tries again to set the scene. It was a time of women’s liberation and hippies. Women now had choices and independence. Hitchhiking was a cool thing for women and men to do, but new types of crimes rose.

The tapes reveal that Bundy thought “women are merchandise.” That thought wasn’t limited to Bundy. Think of Playboy or our growing awareness of the male gaze.

In Washington, eventually eight women disappeared around Washington State, leaving their personal effects behind. All very similar in appearance. They knew the person of interest, what “Criminal Minds,” that the unsub was possibly named “Ted” and that he drove a light brown VW bug. Masses of information without computers and often without cooperation between different cities.

The breakthrough was a girlfriend who was afraid, but uncertain. Elizabeth Kloepfer did make a call, but the police could not find enough evidence to connect him with the crimes. He was a law student and had no criminal background. (Kloepfer eventually wrote a 1981 book, “The Phantom Prince: My Life with Ted Bundy” under a pseudonym).

And then there was a survivor, a woman who got into a VW Bug with a man she thought was a policeman, perhaps undercover: Carol Darounch.

Not My Turn to Watch Him

You have a murder suspect and you treat him with respect. He’s white and well-spoken so why use unnecessary restraints? Bundy was in an Aspen, Colorado courthouse, supposedly researching in the legal library when he jumped out an unbarred second-story window 25-feet to the ground. “He wasn’t shackled, he wasn’t chained…They let him roam freely throughout the courtroom.”

The guard was at the door and Bundy was gone. With only two roads out, the police stopped all cars and made a few unrelated arrests but not Bundy. A hundred and fifty officers searched the hills. The rain, high altitude and the cold, drove Bundy back into Aspen after almost seven days.

Bundy calls up Al Carlisle, the prison psychologist who did the first assessment of Bundy. Carlisle thought it was like Bundy was almost proud, talking to him like a son describing a home run. The first escape wasn’t the last. The second one would involve weight loss and books.

As the series makes clear, although Bundy thought he was intellectually exceptional, he was not really as smart as he thought he was. Bundy defended himself, but not well. His charm didn’t work on the judge or the jury. He was convicted.

Yet he did attract female attention and got married. There was a child who might have been his (Rose); she would be in her mid-thirties now.

Bundy turned his charm on to other avenues, including these two journalists. He proclaimed his innocence until his execution date (by electric chair) closed in and then he tried to make deals–bargaining with bodies. That would fail, too. He had lied too often. Now those who had believed in his innocence were horrified.

His notoriety turned his execution into a celebration, almost a frat party atmosphere with college kids rejoicing without reflecting on the lost lives and the anguished families.

There are several reasons I find this limited series valuable. During this time of despair for many journalists, the series gives us possible directions for writing skills. These two journalists found a good story and although they were duped at first, they came away with a good story, one that became a book and now a documentary.

The documentary has access to many of the people who were involved. We get their accounts with enough thoughtful distance now that time has passed. The woman who was on the case went on to work with the FBI. Certainly one wishes she would become the topic of a book and then a movie.

Through this documentary, we can see how technology has changed the game, how cooperation between agencies, national data banks, improved forensic science can find evidence where before there might have been none.

Hearing Bundy’s voice and understanding his strategies are instructive. He wasn’t the easy to identify monster. He was fully aware of his white privilege and the interagency blindspots. If “Criminal Minds” is to be believed there are more serial killers out there, but we have better technology and since the events of “Mind Hunters” (also a Netflix series), we have greater developed psychological assets to catch them.