There’s a whole lot of bad in “Bad Samaritan” and the presence of my beloved David Tennant as the prime baddie doesn’t make it better or more believable. Horror fans might recall another similar award-winning flick: “Don’t Breathe” which won a Saturn Award last year.

“Bad Samaritan” plays off the incongruency between the concept of samaritan and its usual adjectival companion “good.”  The movie begins with a few unexplained scenes between a boy, a girl and a horse and that’s followed by a sex scene in a different time and place between the underemployed photographer, Sean Falco (Robert Sheehan) and his college girlfriend Riley Seabrook (Jacqueline Byers). Sean takes some topless photos of Riley and we’ll learn soon enough why this is never a good idea. This public service announcement is perhaps the best part of the movie.

Sean and his friend Derek Sandoval (Carlito Olivero) work as valets at a restaurant but this employment seems to be a matter of their own business, getting their positions through charm rather than actually being hired. They provide a service that the restaurant owner didn’t necessarily want. Sean and Derek use the valet service to find places to burglarize. One takes the car and enters the home while the other keeps tabs on the progression of the dinner.

Sean breaks into the house of a particularly fastidious man, Cale Erendreich (Tennant) and he find a woman, Katie (Kerry Condon), bound and gagged. Freaking out at the level of high tech security, Sean fails to free Katie, but promises to return. Sean has also inadvertently tipped off Cale who prepares for the possibility of discovery.

Yet all of this is too slick and, time-wise, doesn’t make sense. Although Sean anonymously reports this to the police, Cale is prepared. When Sean files a missing person report, it still seems that no one cares, even the FBI. But FBI agent Olivia Fuller (Tracey Heggins) has noticed something.

So has Sean’s stepfather, Don (Rob Nagle), and his mother Patti (Lorraine Bahr). Sean has lost his easy-going con artist face and becomes frantic as Cale begins an all-out assault on his loved ones. You can, if you follow the theory of racism and film fatalities, guess who dies. That topless photo will come into play linked to the dangers of social media and that’s not the only thing that puts a chill on the Sean and Riley romance.

While David Tennant brings many layers to his Doctor Who and his world weary detective in “Broadchurch,” he doesn’t have much of a chance with the starvation-thin script by Brandon Boyce and while Dean Devlin attempts to make Tennant more threatening by many looming shots, Tennant is a slight man and takes up less physical real estate than Sheehan although they are about the same height.

While the psychological aspect supposedly explains Cale’s villainy, Boyce’s script isn’t as convincingly textured as “Equus.” And it’s easier to believe that the boy was permanently scarred by being named after a curly-leaved type of cabbage. (Cale apparently derives from a Hebrew word meaning dog and thus brave.) 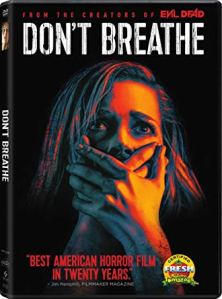 The place is Detroit. The goal for Rocky is enough money to flee for California with her younger sister. Her home life isn’t good. Her mother is man and her mother’s boyfriend is alcoholic.

The gang’s fence low balls them, but gives them a tip: There’s a former US Army Special Forces vet living in a bad neighborhood who got a big settlement after his only child was killed by the daughter of rich people in a car accident. The man is widowed, living alone except for his seeing eye dog because he’s blind. What could be easier than stealing money from a blind man?