Ms. Geek Speaks: Antifa and ‘All My Heroes Kill Cops’

This photo was posted by actor and Republican James Woods. James Woods has 802K followers. This is a woman with her face covered. She must be #Antifa, right?

That’s what James Woods assumes. You might think because of the date of Woods’ tweet that this photo had something to do with the protests in Charlottesville, Virginia or the subsequent ones the next weekend in places like Boston. 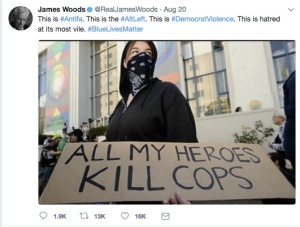 On Twitter, James Woods (@RealJamesWoods) claims this is #Antifa and the #AltLeft. He also claims this person is a Democrat (#DemocratViolence).

The photo comes the San Francisco Gate when in October of 2011, there was a protest called Occupy Oakland.

The event was in front of Oakland City Hall at Frank H. Ogawa Plaza and Occupy Oakland began as a protest about the fatal shooting of Oscar Grant by the Bay Area Rapid Transit Police in 2009.  Over 400 people were arrested under then-Mayor of Oakland, Jean Quan (in office from 2011 to 2015), a Democrat. She was succeeded by another Democrat as mayor, Libby Schaaf.

In 2013, the Oakland City Council paid settlement money to 13 Occupy Oakland protesters who were injured by police ($1.17 million).

The current Occupy Oakland Twitter account notes that it is “news of resistance in Oakland and across the Earth” and has “no love for capitalism.”

On 10 Nov. 2016, Occupy Oakland did tweet, “#antifa it’s time to mobilize more than ever #antifascism

“Day 1 In Trump’s America” by @Incilin.” @Incilin is the senior editor at @Genius, Insanul Ahmed.

We don’t really know if the woman is a member of Antifa or the Democratic Party or if she is involved in more protests. We only know she supported the Occupy Oakland protests which were about police brutality. We know that the Democratic mayor did ask for the police to crack down on the protesters and the methods used by the police were not always correct under civil law, hence the payout. 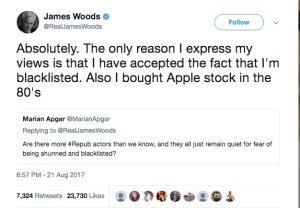 While James Woods opines that he is blacklisted because of his conservative views, but he doesn’t always have his facts straight.

This James Woods (@RealJamesWoods) post on #Antifa and #DemocratViolence is #FakeWoods.