Long Beach Comic Expo: Be Aware and Be Prepared!

This weekend, Long Beach Comic-Con the winter edition is on so it’s a great time to remember what happened last time. We took a pleasant drive down to the Long Beach Convention Center for the Fall 2016 Long Beach Comic-Con. Despite the parking hassles, we managed to have a good time and you can too if you take time to consider a few things. Hopefully these glitches will be fixed for this show, but just in case, here’s our story.

Leaving later than usual, we only ran into traffic when we were in sight of the convention center. As it turns out, there was construction that resulted in sidewalks and a side street being closed. Getting out to get our press passes, I found that the usual long line up of cars wasn’t at the Promenade Atrium and Plaza.  The signage was confusing. The first sign seemed to point down the Promenade, but a second signed pointed the other way, causing quite a few attendees to stop and try to figure things out. Some tried to continue down and go around, but ended up coming back.

The first sign didn’t point to a path one could actually take since there was no open stairway going east and town on E. Seaside which was blocked off. There were no signs on the Convention Center Walkway. 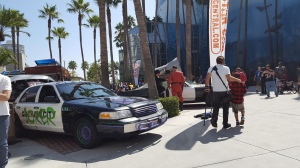 Once at the correct entrance, the line for advanced sales was long, really long. Inside the exhibition hall, it seemed noisier than usual and cellphone service was difficult if not impossible. That meant some vendors couldn’t use their cellphone apps to charge and provide receipts. We’d seen this problem before at a previous Long Beach Comic-Con. Part of the noise was the bigger crowds and another part was the video game being projected on to a large screen.

Having most of the cast from “Firefly” probably increased the number of people there. Although it was advertised that the rooms would be cleared between panels, the “Con Man” and “Firefly” panels, were back-to-back-to-back. That meant no time provided in the schedule for clearing the room. That was a scheduling problem, but if you’re an experienced comic-con attendee, you’d have been able to predict that.

The “Firefly” and “Con Man” panels were probably the biggest thing ever to hit Long Beach Comic-Con so the con is growing, but as one might expect, it is having growing pains. Ian and I love the usual long line up of cars and that was missing although it is free to the public. A few cars were parked in what usually serves as a passenger pick-up round-about and a few food trucks. 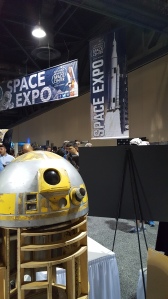 We spent most of our time in the corner dominated by the Columbia Memorial Space Center in Downey. The center had provided space for Meade Instruments who told us about a new product that will hopefully be coming out in time for the holidays. We will be learning more about that later.

This time Meade Instruments should have a special package deal for the upcoming solar eclipse.

Over all, the shopping was fun and informal. That’s what we like

about Long Beach Comic-con–you actually get to meet and talk with artists.

This weekend, the Space Expo returns. Panels include learning how to build your own R2-D2 and “The Future of Virtual and Augmented Reality.”

Bernie Bregman of Nerds Like Us will be hosting the Long Beach Comic Expo Cosplay Contest on Saturday in the Thunderdome (Main Ballroom) from 7 to 8:30 p.m. You need to register for the contest.

If fashion is your thing, Le Geek So Chic will have a fashion show.

“Supernatural” ghostfacers A.J Buckley, Brittany Ishibashi, Dustin Milligan, Mircea Monroe, Austin Basis and Travis Wester will be at the show on Saturday only. For a photo op, you’ll need to purchase tickets.

Show tickets are through Eventbrite.com. 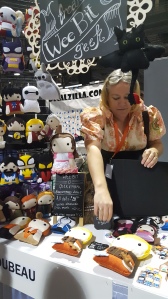 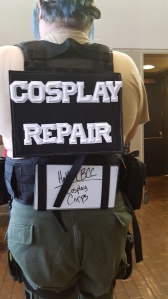 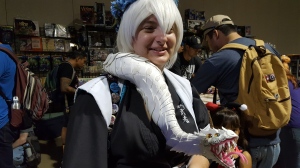